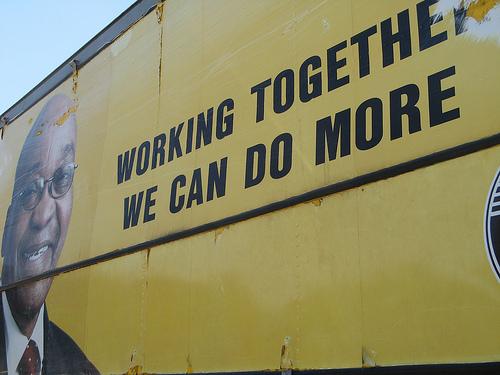 Outside of death and taxes there are few things in life as certain as the outcome of an election in South Africa with the ruling African National Congress (ANC) on the ballot paper – as democratic South Africa’s third round of local government elections, held on May 18, again confirmed.

Ahead of the vote there had been much speculation about a massive protest vote or abstentions, but the ANC’s 63.7% of votes almost matched the 65% it had netted in the 2006 local government election. And more voters turned out than for any previous local government poll.

The ANC still controls the vast majority of cities, towns and villages in the rest of the country – including in KwaZulu-Natal, where it trounced its long-time foe, the Inkatha Freedom Party (IFP), and the latter’s splinter party, the National Freedom Party (NFP). (The ANC’s 57% of votes in that province eclipsed the 28% captured by the IFP and NFP together.)

The centre-right Democratic Alliance (DA) made its strongest showing yet, attracting 22% of total votes cast and beating the ANC across most of the Western Cape province. It is attracting a trickle of support from black South Africans, but it is yet to shed its image as a political refuge for nervous, disaffected minorities.

Spot lit again is the question, How does a political party that presides over one of the most unequal societies in the world, where one third of workers are jobless, and close to half the citizens live in poverty, triumph so emphatically in election after election?

It’s at local government level that citizens’ woes and discontent seem most easily translatable into protest votes aimed, at a minimum, to “send a message”.

Many dozens of community protests every year attest to widespread disgruntlement at the performance of the state, and at the indifferent conduct of many local politicians and officials. These protests are symptomatic of the troubled domain of the local state, and of the intense contests for power, resources and entitlements being waged there.

Financially hamstrung, local councils’ stock of experience, management capacity and warm bodies is hardly bountiful. Management skills are often lacking, and poor political and managerial leadership are common problems. Infrastructure and services are introduced unevenly and at fitful pace, which magnifies the often-merited impression of favouritism and a stinging sense of unfairness.

Yet, consider Mpumalanga, a province that periodically convulsed with community protests in recent years. In the May 18 election, 78% of voters picked ANC candidates and more than 500,000 more voters turned out for the party than had in 2006.

These sorts of phenomena tend to flummox analysts.

Part of the explanation lies in the fact that things have changed since 1994.

Access to schooling and healthcare, and provision of water, sanitation and electricity has broadened for black South Africans, even though very many households struggle (and fail) to afford those services. A smaller share of South Africans now goes hungry compared with 15 years ago.

And SA’s social protection system now benefits some 14 million people; a large proportion of low-income households would probably be unviable without these grants and pensions.

Such gains are tempered by other factors – not least punishing levels of joblessness, the AIDS and tuberculosis epidemics that kill upwards of 200,000 South Africans each year, and the stringent cost-cutting and cost-recovery policies that ration access to basic services in poor communities.

Those are the kinds of paradoxes that especially provoke rancour: there is change, but it’s not seen to be quick, fair or democratic enough.

Much as this exasperates, it does not yet spark outright rejection of the ANC.

Instead it seemed to encourage a drift away from electoral politics; decreasing numbers of voters having been turning up at the polls. The percentage of eligible voters who voted for the ANC shrank from 54% in 1994 to 39% in 2004.

But in the 2009 national poll, the decline in voter turnout reversed. And last week, it did so again. Voter turnout rose to 57.5% (up from 48.4% in 2006), and a million of them were voters who had not been registered in 2006. So apathy doesn’t explain the ANC’s winning streak.

In last week’s election, the ANC actually netted more votes in KwaZulu-Natal, Limpopo, Mpumalanga and the Western Cape than it had in the previous local government poll, in 2006.

The fanfare about the opposition DA’s gains ignores the fact that they occurred mainly in two provinces, Gauteng and the Western Cape. Elsewhere it made marginal inroads, if any.

The typical explanation is that voters lack a credible alternative. But that argument neglects the complex bonds that exist between the ANC and its supporters. Those relationships are not binary (on/off, for/against); they are shaded, they shift over time, and they can lead to “contradictory” actions.

In one respect, the ANC’s electoral supremacy is an index of its knack at preserving its stature and appeal, even in inauspicious circumstances. It does this primarily by positioning itself credibly within a narrative of struggle, liberation and deliverance, a narrative that spans generations.

Supporters know the ANC in several incarnations. One is that of an abstraction, where the ANC represents a repository of ideals, values, and a distillation of a history of struggle. This is embodied in an organisational entity, and it is entrusted to the custodianship of its leaders and officials. Think of it as the “metaphysical” dimension of the ANC.

The mystical overtones are obvious, with secular structures and activities operating in service of virtually “sacred” ideals. It is in this sense that the ANC is seen to transcend the individuals that constitute it.

A community protest does not automatically imply condemnation of the “metaphysical” entity – the idea of the ANC – or even of its leaders. Rather, it can be an appeal for intervention to uphold those values and ideals, and call to order individuals and structures that are seen to be desecrating the organisation and its history.

When Jacob Zuma told supporters in Cape Town in 2008 that the ANC would rule until “Jesus comes back” he was not only hyperbolising; he was tapping into the mystique of an organisation that is invested with millenarian duties.

Often a central demand of protestors is for the President to meet with the community and hear their grievances first-hand. The assumption is that the ANC leadership, once alerted to the facts, will call the transgressors to book, and act promptly and fairly.

It is in that respect that the ANC has become increasingly vulnerable. Its capacity to serve the public with consistency and to address the causes of discontent – even its inclination to do so – is taking severe strain.

And it’s highlighting the increasing dissonance between the “idea” of the ANC and its secular reality.

This week’s outcome presents the ANC with little more than temporary respite. Disgruntlement and community protests will continue, and the party’s authority will be tested, not least by its own supporters.

These are not mere teething problems. They are anchored in deeper economic and social crises that date back to the 1970s, and which the ANC government has not been able to resolve.

The party has worked to improve the lives of the black majority, yet close to half the population lives in poverty, jobs are scarce, the country is more unequal than ever, and insecurity is rife.

More jobs are vital, but even the most hopeful pledges envisage 15% unemployment in 2020 – and that’s if one counts beggars, parking attendants and buskers as “employed” (as the official unemployment statistics do). Ignore such generous tallying and the current unemployment rate stands at 35%.

Meanwhile, the ANC has come to host a more disparate assortment of interests, ideologies and ideals than ever.

The organization itself (via its investment arms) and significant proportions of its leaders and office bearers are entangled in profit-making business ventures. Powerful sections of the ANC have developed a reflexive sympathy for policies that put the market ahead of society.

This places a huge premium on retaining power “” not for any single goal, but in order to facilitate the pursuit of disparate objectives and ambitions.

These realities – the deprivation amidst abundance and the rampant sense of unfairness this stokes — will keep generating insubordination, and eventually will spark instability. With the scope for material change seemingly cramped, other ways of bolstering authority and building consent have to be found.

One tried and trusted way of defusing uproar is to affirm and valorise bonds that can muffle discord, or channel it in diversionary, more manageable directions.

The bonding and disciplinary force of African nationalism remains the cardinal ideological turnkey of SA’s transition. The versions of nationalism deployed until now have been largely embracing, and mostly undemanding.

But exclusionary interpretations of belonging, entitlement and rights might soon prove to be politically rewarding – even, or perhaps especially, in a society that was split asunder by apartheid.

More profane and resonant varieties are available – ones inflected with racial and ethnic chauvinism, for example, or with narrow, exacting interpretations of culture and tradition.

There is a real danger of recourse to rousing affirmations of identity and entitlement, and to populist discourses of authenticity – who is “really” South African, African or black, what is a man, and where do women fit into all this.

Antipathy toward the “alien luxuries” of liberal constitutionalism might gain support; indeed, heartfelt misgivings about “hollow rights” and a “paper Constitution” already circulate.

Left unchallenged, this might well develop into a form of populist nationalism.

Some in the ANC seem willing to risk such an experiment, in which social conservatism can be combined with licence for acquisitiveness and immoderation, with targeted largesse serving as lubricant.

The outcomes are difficult to predict. No doubt such moves will be hotly contested, from both inside and outside the ANC. But it would be foolish to assume a progressive outcome.

Too many coarse tendencies and brazen interests now rub shoulders with power.

Writer and political analyst HEIN MARAIS’ new book SOUTH AFRICA PUSHED TO THE LIMIT: THE POLITICAL ECONOMY OF CHANGE (UCT Press and Zed Books) has been praised as “an extraordinary achievement” and “by far the best overview of political, economic and social change in post-apartheid South Africa”.