ALEX THURSTON’S REVIEW OF ‘FIGHTING FOR DARFUR’ BY REBECCA HAMILTON 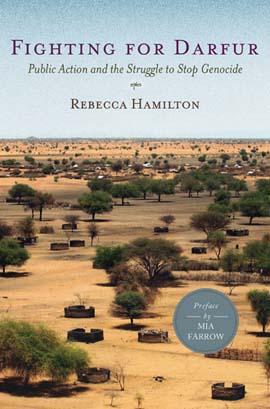 Rebecca Hamilton’s Fighting for Darfur: Public Action and the Struggle to Stop Genocide raises important and troubling questions about the relationship between America’s domestic politics and African conflicts.  Hamilton thoughtfully probes the limits of what earnest but inexpert Americans in the Save Darfur movement achieved in their quest to bring justice to Sudan.  She thereby joins a debate about Save Darfur that took on great urgency with the 2009 publication of Dr. Mahmood Mamdani’s Saviors and Survivors: Darfur, Politics, and the War on Terror.  At stake in this debate are the questions of how much context citizens must understand before they act, the politicization of the word genocide, and silences concerning the violence America inflicts on innocents abroad.

Hamilton does not explicitly address Mamdani’s arguments, but this review reads Fighting for Darfur against Saviors and Survivors in order to advance the debate.  Hamilton, a lawyer who worked with Save Darfur and the International Criminal Court, is an insider who acknowledges Save Darfur’s weaknesses.  Mamdani, a professor at Columbia University with long experience in Sudan, is a fierce critic of the movement.  Despite their different sympathies, these authors sometimes reach complementary conclusions, particularly in their calls for more nuanced responses to atrocities.

The two books start from different places.  Fighting for Darfur is partly a sequel to Samantha Power’s A Problem from Hell: America and the Age of Genocide.  Power chronicles “America’s toleration of unspeakable atrocities” such as the Holocaust, and suggests that diplomatic and military intervention is the moral response to genocide.  Fighting for Darfur assesses Power’s argument that “it is in the realm of [U.S.] domestic politics that the battle to stop genocide is lost.”  Hamilton concludes that mass domestic engagement is not enough; concerned citizens must go beyond the familiar and the simple in order to understand the complexity of different crises.  As Sam Bell, a leader in the Save Darfur Coalition whose story helps tie together Hamilton’s book, says in the closing pages, “I think one of the biggest missing pieces for the movement initially was context, understanding the context [of events in Sudan]” (191).

Bell’s words strongly evoke Mamdani’s view that the driving imperative of Save Darfur was “to act before seeking to understand” (3).  Saviors and Survivors sets out to contextualize Save Darfur, and Darfur itself, with regard to local and global politics.  For Mamdani, activists’ ignorance made Save Darfur party to dangerous misunderstandings of the Darfur conflict and turned young Americans into bearers of misguided notions that punitive justice, in the form of military intervention and regime change, would solve Sudan’s problems.  Save Darfur, Mamdani argues, was “the humanitarian face of the War on Terror” (6): it did not enact Power’s vision of a morally engaged public, but rather assuaged activists’ guilt over the Iraq War while reinforcing the militarist logic behind the invasion of Iraq.  Mamdani criticizes Save Darfur more harshly than Hamilton does.  But the authors agree that the organization moved out of step with the realities on the ground in Sudan because it allowed zeal to trump knowledge.

The question of contextual knowledge reaches its greatest intensity with the murky and highly politicized issue of whether genocide occurred in Darfur.  Here, Hamilton and Mamdani disagree, though not entirely.  Hamilton writes that the Sudanese government’s counterinsurgency against Darfur rebels escalated in 2002-2003 into genocide against an entire population.  But Hamilton removes Darfur from a monolithic paradigm of genocide and questions the analogy of Darfur to Rwanda that helped spark the Save Darfur campaign: this analogy “did not end up serving Darfuris well when its lessons were carried over into the policy realm because of the very different contexts…in which these two manmade tragedies unfolded” (191).  Mamdani does not see the Darfur conflict as genocide but rather as civil war.  He pushes the point about Rwanda further: “Rwanda was the site of genocide.  Darfur is not.  It is, rather, the site where the language of genocide has been turned into an instrument” (8).  The authors make different claims about genocide, but they both see dangers in accusations of genocide that de-contextualize distinct conflicts.

Part of the political context of Darfur has been America’s violence overseas, an issue that haunts Hamilton’s story even though she focuses on activism associated with Darfur.  One does not have to accept Mamdani’s argument that Save Darfur saw Sudan through the lens of the War on Terror in order to understand how the Iraq War cast a shadow over Save Darfur’s efforts.  As Hamilton details, the international political fallout from Iraq constrained US policy choices regarding intervention in Sudan.  Some US activists acknowledged the relationship between the two conflicts – bumper stickers reading “Out of Iraq and into Darfur” were common at one time – but “the aftermath of Iraq,” Hamilton concludes, made activists’ assumptions that the US could “lead the call” for a strong UN peacekeeping force in Darfur untenable (176).  Mamdani sees the relationship between Darfur and Iraq differently: he writes that Save Darfur directed the attention of young Americans – a “potentially rebellious constituency” – away from the violence America was inflicting on Iraqis, “thereby marginalizing…those who continued to mobilize around Iraq” (60).  These considerations lead back to the politicization of the word genocide.  The war in Iraq was not, by most accounts, genocide.  But if genocide becomes a political label that Washington applies selectively, then accusations of genocide can help silence discussions about other forms of mass violence in which America is complicit.

Given ongoing American interventions abroad, what is the lesson of Save Darfur?  Hamilton sees Save Darfur as offering a negative result, a grim revelation that America’s global influence was not sufficient to halt atrocities overseas.  As an alternative to citizen campaigns focused on individual conflicts, she suggests reframing US foreign policy away from “national security” and toward “human security” (205).  Emphasizing global human equality, she hopes, would improve America’s moral standing and involve America more equitably in an emerging global interdependence.  Mamdani, meanwhile, believers that outsiders can help resolve conflicts, but only certain kinds of outsiders – he favors the African Union’s promotion of “survivors’ justice” and reform on the model of post-apartheid South Africa, rather than the United Nations’ (and Save Darfur’s) call for “victors’ justice” on the model of Nuremberg (299).

Hamilton, like Mamdani, suggests that the lesson of Save Darfur for Americans today is that we must scrutinize ourselves in the mirror longer, and more critically, before we presume to know what is right to do in other people’s countries.  Fighting for Darfur, with its careful analysis of Save Darfur’s motivations and activities and its inclusion of the reflections of key movement insiders, is a valuable contribution to this effort.  The debate Hamilton has joined, and furthered, should and will continue.

Alex Thurston is a PhD student in Religion at Northwestern University, and runs Sahel Blog (http://sahelblog.wordpress.com), which focuses on religion and politics in West and East Africa.