Take a holiday in Somaliland: journey to the state that isn’t – By Magnus Taylor 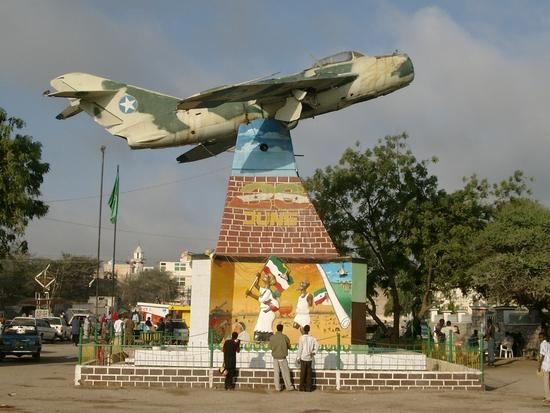 The Hargeisa MIG - shot down during the civil war, and a symbol of Somaliland's defiance.

Michela Wrong once wrote that you can tell a lot about an African country by the way they issue, or refuse you a visa. This remains true, but as African leaders see the benefits of liberalisation (in a variety of different guises), heralding a stream of hot money flowing in to the continent, there are many other measures of “˜doing business’ that are equally revealing. Commerce in Africa now seems inextricably linked with the mobile phone, so seeing how easy it is to get yourself up and running with a SIM card can be a good measure of a place.

In Addis Ababa I had to take a photocopy of my passport and 2 other headshots to a long queue in a small office, and several days later the stupid thing still didn’t work. I didn’t go back. In Hargeisa, capital of Somaliland, I arrived at my hotel, enquired about the SIM, whereupon the receptionist flicked a new one across the counter, expertly inserted it into my phone, and immediately topped me up with $5 worth of credit via text message. It all took 2 minutes.

Whilst Ethiopia is no economic laggard – as evidenced by the increasingly terrible traffic in the capital and ugly edge-of-town industrial expansion – it is the freewheeling capitalism in the Horn of Africa’s non-state state that really grabs the attention. Somali society has traditionally been strongly oriented towards trade and despite decades of chronic insecurity in the South, these networks remain. The Somali diaspora is well-known internationally, particularly since the civil war forced many of them out into prominent communities in Europe, North America and the Middle East. Somalia is now the second biggest importer of goods from Dubai, with wooden dhows risking pirates whilst plying trade routes across the Arabian Sea to dock at Berbera, Bosaso or Mogadishu down the Somali coast.

Positioned on the upper haunch of the Somali dog-leg the Republic of Somaliland looks initially unpromising. It is mainly dry and rocky, there are few paved roads, and the population is small and generally dispersed. Only in the capital city do you really see the potential of the place. Downtown Hargeisa is booming, and the centre of the boom is Dahabshiil – the country, and region’s major money transfer company. I met up with the CEO Abdirashid Duale who’d just flown in from Dubai. He took me to the centre of operations where I observed 2 remittance transfers being made, both over $300, one from London and the other Melbourne. Deeper in to the offices the more serious money is moved around. Stacks of dollar bills, generally preferred to the rather weak Somaliland shilling, are processed for local businessmen and international NGOs – both the United Nations Development Programme and World Food Programme have outfits in Hargeisa, and Dahabshiil is the preferred means of making financial transfers. The company’s success, whilst extremely impressive, tells you something about the limitations of the Somaliland economy – it is substantially based around bringing in wealth created externally.

Whilst the economy may be on the up, Somaliland still feels extremely isolated. An employee of a big international NGO who I met in the lobby of my hotel, The Mansoor, looked at me with astonishment when I said I’d come to Hargeisa for fun. “The biggest danger here,” he said “is dying of boredom.” This might have been typical ex-pat world weariness, but it underlined the fact that Somaliland has successfully insulated itself from the more newsworthy goings on in Southern Somalia. I’m told there are probably Al-Shabaab sleeper cells in Hargeisa, but the militant islamist group hasn’t attempted an attack since 2008 when it bombed the presidential palace, the Ethiopian consulate and UNDP offices. Security at the Ethiopian consulate is still tight, with mobile phones confiscated at the front desk. This causes a blazing row between my guide, who considered himself above such precautions, and the rather jumpy soldier at the gate.

I’m interested to know what actual problems are attached to international non-recognition as a state. The answer I get most regularly is associated with the processes of doing business – the lack of any international banks (hence the success of Dahabshiil), the difficulty of obtaining insurance – I’m pretty sure my own travel insurance would have been invalid if I’d needed it there. I didn’t bother to ask. But there seemed very little likelihood of anything actually going missing in the country. The Somaliland population seemed almost pathologically honest – money is stored in great blocks on the street and transported in sacks.

A more concrete example is provided by Africa Confidential, which recently reported that the Hong Kong oil company PetroTrans is likely to pull out of investing in the port of Berbera, having been unable to obtain insurance for the Liquified Natural Gas plant it was to build. The plant was to link up gas fields in Ethiopia’s Ogaden region with export facilities on the coast, and will now see Somaliland lose out to its tiny, but strategically important neighbour Djibouti.

When I drove it, the road east out of Addis Ababa towards the coast is busy with trucks, but the traffic thins out when you pass the turn off North towards Djibouti, and the Southern fork heads towards Dire Dawa, and beyond that the capital of the Somali region, Jijiga. The road is good however, but there isn’t much using it, and we skim along it at a steady 100km per hour passing bright green fields of khat, which look like tea plantations, and provide a mild stimulant when chewed that makes the heat of the afternoon bearable for populations from Northern Kenya to Yemen. Good travelling conditions continue right up to the Ethiopian border, but then stop abruptly for the 90km onwards to Hargeisa which is a dirt track through the Western haud region. This is Somaliland’s most fertile land, excellent for agriculture and pastoral grazing, but bad for unmade roads, which become thick with mud after heavy rain. Ethiopia’s continued poor relations with Eritrea make port facilities in neighbouring countries of crucial importance. So it feels like Somaliland is missing out.

In Hargeisa the main streets are buzzing, shops sell goods imported mainly from the Middle East and money changers sit behind massive blocks of Shillings (6,500 to the dollar.) But leave the capital and you begin to see the place’s real challenges. How do you grow an economy in a small, isolated patch of semi-desert? The livestock trade, sheep and goats exported to Saudi Arabia (particularly during the hajj) is a big deal. This forms a nice historical continuity, as the Protectorate of British Somaliland was invented in order to safeguard the export of meat to the strategically more important military base across the water at Aden. Berbera is the main export hub, but whilst the port may be doing a roaring trade (described far better than I can by the BBC’s Mary Harper in this audio piece), the town is unprepossessing and frighteningly hot.

I swam in the luke-warm Indian ocean and kicked a football around with some Somali boys and their father who have come down to the coast for a brief beach holiday. Fully-clothed Somali women wade into the gently breaking surf, their colourful dresses becoming soaked as the men splash around in shorts. Somaliland is still quite a conservative society, and whilst I couldn’t hope to penetrate below the surface during my short trip, a friend casually mentioned that Hargeisa was “much more fun” before the civil war. He suggested that when the great exodus took place in the face of bombardment from Siyad Barre’s  Air Force in the late 1980s, the  people turned to their religion. Many left the country altogether, never to return.

An entrepreneurial hotel owner has built the Berbera Mansoor with beach houses facing out to sea, but it looks pretty empty to me and not a patch on the Hargeisa version where the lobby is full of youthful NGO types on laptops and Somali men watching Premier League football or Al Jazeera. I saw no other casual visitors, and in truth, my motivation for a Somaliland mini-break wasn’t with relaxation central to my plans. Genuine tourist activities are scarce, although the cave paintings at Las Geel should be a UNESCO World Heritage Site, but instead are down an unmade side road and suffer from the corrosive droppings of the swifts that nest in cracks in the cave walls.

I wonder whether Somaliland’s successes have been made possible by the fact that it has stayed, substantially, off the radar. Richard Dowden predicts that if it was ever formally granted independence then it would most likely precipitate a new war with the South. However, whilst many Southern Somalis still believe in the principle of a united, or a Greater Somalia, it seems unlikely that the South would be in a genuine position to resist. Internationally recognised independence seems something of a totemic desire for Somalilanders – everyone I spoke to in Hargeisa passionately believed in it. A trio of trainee anaesthetists told me that they were desperate to continue their studies outside of Somaliland so that they could come back as doctors and help build the country, but their qualifications were not recognised internationally. They all came from reasonably wealthy Somali families who could afford to send them abroad, but nowhere would take them. Such misfortune was immediately attributed to non-recognition, but I thought that it might have more to do with the quality of the institution – existing on a shoe-string budget, with few qualified staff – rather than recognition per se.

Back in London I attend a briefing with the Somaliland Foreign Minister Dr Mohamed Omar – a bespectacled, determined man fiercely proud of “our extraordinary achievement” in building Somaliland up from the rubble of the civil war. Foreign governments are clearly starting to take Somaliland seriously as a political, if not a national, entity. Liaison offices for countries, including the UK and Turkey, are springing up in the capital and President Silanyo attended the London Conference on Somalia in his own right as head of “˜state.’ But there are worries – the security situation remains uncertain, and whilst Mogadishu may have gained from the expulsion of Al-Shabaab, there is a danger that the movement may splinter, and concentrate its operations on easier targets like Hargeisa, which unlike Mogadishu, is not defended by thousands of African Union troops.

Somaliland’s foreign policy is about “much more than just international recognition” says Dr Omar, and I tend to agree. Recognition is merely a necessary development in order to ensure people take the country seriously. Visiting the place might lull you into a false sense of security that everything is calm, but this is still a small player in a bad neighbourhood. Somalilanders cast their eyes South with nervousness, whilst desperately trying to persuade investors that everything is fine.