Somalia: peace in Mogadishu is fragile but holding – By Mary Harper 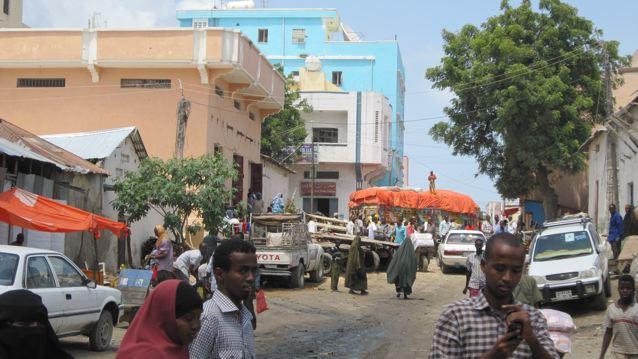 Bakara market in Mogadishu is booming after the Islamist group Al Shabaab left the city a year ago.

Last month, as I walked through Bakara market – the main commercial district of Mogadishu – it was difficult to believe that just one year ago, it had been a stronghold of the Islamist group, Al Shabaab, and the scene of frequent fire fights and mortar attacks.

In August 2011, the militia largely withdrew from Bakara and the rest of the city. It has since been driven out of other key areas of Somalia, but still controls significant parts of the country, and carries out frequent suicide and other attacks in the capital.

Bakara market was positively booming. In some streets, I could not move for the crowds of shoppers. In others, donkey carts, cars, minibuses and lorries piled absurdly high with produce, jammed the roads, horns blaring constantly.

As a rather obvious foreigner and therefore a potential target, the plan was to keep me on the move, whether on foot or in the car. This proved difficult in Bakara. Once, when we were completely stuck in a traffic jam, one of my bodyguards fired his gun out of the window of our vehicle. He told me it was the only way of getting the traffic to move. Fortunately, he aimed upwards into the sky.

Bakara market is a riot of colour, sound and smells. There are freshly painted buildings, in beautiful pastel shades of pink, blue, yellow and green. Others are grey concrete, clad in scaffolding, as Somalis rush to repair them from the rubble of war. New tin roofs glint in the sunlight.

The huge market is cleverly divided into different zones, each area selling particular items. We started off on “˜Pharmacy Street’, where the shop fronts were decorated with paintings of medicine bottles, syringes and packets of pills. One even showed a box of Viagra, the drug used to enhance male sexual performance.

“˜Suitcase Street’ and “˜Shoe Street’ were next to each other, a sign perhaps that the traditionally nomadic Somalis are always on the move, packing up their bags and wearing out their shoes. We moved through an area selling the brightly coloured gauzy cloth used to make women’s dresses. Now that Al Shabaab has largely left Mogadishu, women are no longer forced to wear dark heavy robes, and to completely cover their faces.

The area selling locally-grown fruit and vegetables, freshly baked bread and slabs of red meat was particularly busy. It was Ramadan, and people wanted to make sure they had enough supplies for iftar, the often elaborate evening meal served to break the fast. I noticed some of the bags of rice and other grains on sale were printed with the words “˜World Food Programme – Not for Sale’.

The offices lining the streets were also doing good business, selling airline tickets, and offering printing, photocopying and other services. The biggest, most glamorous buildings were home to telecommunication giants, remittance companies and newly-opened banks.

A local official told me that millions of dollars of business are done every day in Bakara market. It was easy to believe him.

The frantic buying and selling was matched by a feeling of almost hysterical tension, of nervous hyperactivity. Bakara market, like much of the rest of Mogadishu, does not feel entirely safe. The fear has not gone from people’s lives. Tempers fly easily, eyes dart quickly. I even saw a donkey careering wildly around and around a roundabout, as if it was running away from something terrifying, with no idea where to go.

On the way to meet the police commander of Bakara, deep in the heart of the market, we walked past a young boy carrying big yellow plastic bags. He was being manhandled roughly by the police and he was crying. When I asked why the police were harassing him, I was told the contents of his bags were suspicious, and that he was a potential member of Al Shabaab.

My guide told me members of Al Shabaab remain in the market, occasionally carrying out grenade attacks and suicide bombings. “You can tell who they are by the look in their eyes and the fact that they are so skinny”, he said. He later pointed out what he said was one of them, sitting listlessly on a flimsy plastic stool with a glazed, angry look in his eye.

The police commander’s office was in what he said was a former Al Shabaab headquarters. The bright blue walls were scrawled with graffiti, which in Arabic script spelled out the full name of the movement, Harakat al-Shabaab al-Mujahideen.

The commander told me that after Al Shabaab withdrew from Mogadishu, he found houses full of suicide belts, explosive devices and disturbing documents. What upset him most, he said, was a school used to keep the remains of people executed by Al Shabaab. He told me some of them had been beheaded. The commander said few people killed by Al Shabaab received a proper burial, with many thrown onto the ground and covered lightly with sand.

As he described how the biggest problem he faced in Bakara was no longer Al Shabaab, but fights over property and money, loud shooting erupted outside the window. The commander immediately got on the phone, and reached under his desk for a large automatic weapon. This was not the random gunfire I heard fairly frequently in Mogadishu, which was mostly just shots being fired in the air to signal a presence. This was a proper gunfight. The commander told me not to worry as it was “just small arms fire” and was “probably a fight about money”.

But the fact that people in Mogadishu are so quick to use weapons to settle arguments, or as was the case with my bodyguard, to move traffic along, is a sign of just how fragile the situation is. When I asked people about the possibility of disarmament, I was almost always greeted with a resounding “˜no’. People said they did not trust the army, the police or the African Union peacekeepers, and that it was nowhere near time to give up their guns.

An even bigger problem is likely to be persuading Somalis to trust the politicians to lead them out of the twenty years of hell into what could be a very bright and profitable future. Many of Somalia’s leaders have done well out of the country’s flourishing war economy. Until they decide there is more to gain from peace than war, it is probable that some parts of the country will continue to be affected by violence and instability for some time to come.

Mary Harper is Africa Editor at the BBC World Service and author of “˜Getting Somalia Wrong? Faith, War and Hope in a Shattered State’, Zed Books, 2012.