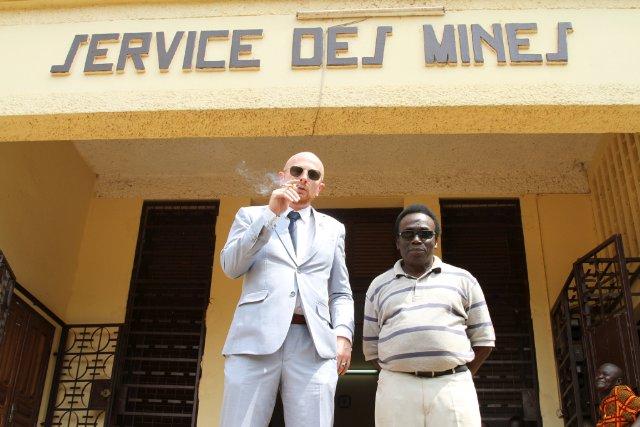 Mads Brí¼gger (left) takes no prisoners as imagined capitalist Brugger Cortzen in his close-to-the-bone investigation of corruption and dodgy-dealing in West Africa.

Two years ago during my first month living in Liberia, my colleague Lamii took me to the annual Press Union retreat in the city of Buchanan. It was a chance for journalists from across the country to spend a weekend bonding and discussing the state of their profession. Many people were scheduled to speak: journalists, foreign dignitaries and local politicians in ascending order of importance. The last to go on, the keynote speaker, was arguably Liberia’s most powerful man: Varney Sherman.

It was my first lesson in the unique art of public speaking in Liberia. How could a man as important as Sherman address lowly journalists without also lowering himself?

Not with an opening joke.

Sherman began with an insult and continued for the next hour to slur and denigrate Liberian journalists as illiterate, lying, corrupt individuals with no respect for the country or the people who ran it: people like him and the President, Ellen Johnson Sirleaf. He was, he reminded us, the lawyer representing every multinational working in the country, the President’s personal attorney, the head of the ruling party, and a Harvard Law School graduate who charges $500 US and hour just to get him on the phone. Liberian journalists by comparison are lucky to make two dollars a day. He doesn’t have to be here, he kept reminding us. We are nothing.

After the speech, a couple of brave souls asked deferent questions and were quickly shot down. Then Sherman and his entourage brushed past the battalion of heavily armed Nepalese peacekeepers and took off in a shiny SUV, literally leaving us in a cloud of dust. The Liberian journalists seemed pleased. It was a significant victory, I gathered, just having him there.

The hairs on my arm stood up last week when I heard Sherman’s familiar Americo-Liberian drawl, the Liberian equivalent of an aristocratic accent, in the middle of Danish documentarian Mads Brí¼gger’s new film, The Ambassador. This time it wasn’t scolding, but sycophantic.

In the film, Brí¼gger works his way through a shadowy network of European diplomatic passport brokers eventually ending up in Sherman’s Monrovia office with a secret audio recorder. Pretending to be a wealthy Danish businessman, Brí¼gger asks Sherman to make him the official Liberian consul to the Central African Republic. A title, Brí¼gger imagines, that will allow his character, a swaggering adventurer in jodhpurs, to run a blood-diamond smuggling operation under the protection of diplomatic immunity.

“A thirty thousand dollar campaign contribution,” Sherman says sweetly and the President will appoint you herself.

Lamii, my Liberian colleague who first took me to see Sherman speak, tells me that The Ambassador is a hot commodity right now among the “intellectual classes” of Monrovia, Liberia’s capital. It is being passed around on memory sticks and cellphones. He’s seen it, as have many people like him””Lamii is a trained lawyer working in development””but the majority of Liberians have not.

“I think he did a relatively good piece of work exposing our corrupt politicians,” Lamii tells me in an email. “The government’s response is angry. They’re claiming that they’re going to put the producer on trial for breaking Liberian laws. Ironically they’re not really interested in throwing the book at the people in their ranks who actually took the payments, especially as such people are within their reach. But I think the president is only angry because it paints her government in a bad light internationally.”

Indeed, the Liberian government, which counts on its international reputation to attract investment, is eager for revenge calling the film “not only immoral but also criminal and offensive to the government and people of Liberia.” Nobel laureate President Johnson Sirleaf has told Liberia’s largest newspaper FrontPage Africa that she is “exploring extradition proceedings to bring the Danish national to Liberia to face justice.”

My friend Wade Williams, an editor at FrontPage echoes Lamii’s sentiment saying that many Liberians “feel it is a shame that President Sirleaf cannot call a probe but decides to take issue with the journalist.” Sherman, she tells me, has denied that he dealt with Brí¼gger as head of the ruling party or took a bribe. An email exchange Sherman released earlier this year implies that the money exchanged was part of a processing fee that he tried to return after the deal fell through.

But Brí¼gger’s target was never really Sherman, nor Liberia. Most of the film follows Brí¼gger’s character in Europe and the CAR as he signs shady contracts, tours brutal diamond mines and instructs his sullen pygmy employees on the importance of economic self sufficiency.

The Ambassador purports to be an expose of white adventurers who use Africa as a means to enrich themselves, hurting and corrupting Africans in the process. And we do meet quite a few people who fit that description, like European and Asian diplomats living in the CAR who give Brí¼gger logistical advice on diamond smuggling. In the end the films attempts a short criticism of Francafrique, before his main source, a French mercenary acting as head of security to the President of the CAR, is assassinated, perhaps by the President himself.

In Brí¼gger’s first film, The Red Chapel, he founds a Danish-Korean Communist theatre troupe in order to stage a comedy production in Pyongyang for North Korean officials. By the end of the harrowing stunt it is easy to question the ethics of his methods, especially when he exposes regular people to risks they surely didn’t ask for.

In The Ambassador, the line between Brí¼gger the documentarian and Brugger Cortzen the capitalist isn’t clear. As the businessman, Brí¼gger uses his privilege to trample over less important people in order to attain more power. As a filmmaker he does essentially the same.

As for Sherman, his interaction with Brí¼gger has surely broadened his prejudices against journalists to include foreign ones as well. Judging by his statements in the Liberian press he’s pretty annoyed. But with no one in Liberia able to hold him to account, I’m predicting he will be just fine.

Aron Leaf is a freelance journalist and editor.