How Shabaab is losing the battle, but maybe winning the war – By Abdi Aynte 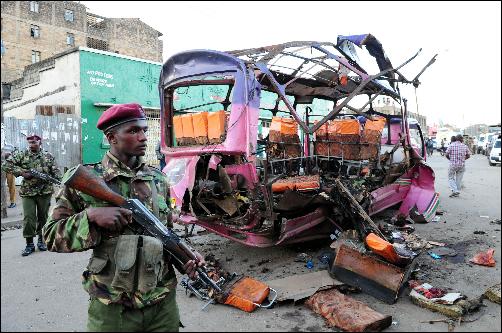 The aftermath of the Nairobi mutatu bombing attributed to Al-Shabaab.

The Somali militant group al-Shabaab is currently losing ferocious battles against Kenyan troops in Southern Somalia –  part of an African Union peacekeeping mission. However, they are winning a strategic war back in Kenya; this is the battle for hearts and minds.

On Sunday, a blast likely carried out by al-Shabaab sleeper cells in Nairobi killed seven Kenyans on a minibus. Soon after, a machete-wielding mob of angry Kenyans descended on the capital’s Eastleigh or “Little Mogadishu” neighborhood. They pillaged shops, burned cars and left dozens of people injured.

In Garissa, near the boarder with Somalia, the scenes were much uglier. After unknown assailants killed three Kenyan soldiers, the Kenyan Defense Force (KDF), using brute force, went on the rampage, setting the local market on fire. In doing so, they deprived the local community of their main source of living.

Members of the Kenyan parliament, who represent Garrisa constituencies, even allege that the KDF forces have raped some women and tortured many innocent people in the area following the pandemonium. Livid, and feeling profoundly insulted, they’re now calling for an urgent investigation, and even suggesting that international help is needed for their protection.

Ethnic Somalis, irrespective of which passport they carry, have become a target for armed thugs across Kenya. Fear, guilt by association and a sense of “˜otherness’ have now enveloped the millions of Somalis living in the country, all of which is good news for al-Shabaab.

This hysteria is playing right into the militant’s playbook. As the Kenyan columnist Macharia Gaitho has aptly observed, “lashing out indiscriminately at Somalis is as foolish as it is self-defeating. The mad bombers must be laughing themselves silly having succeeded in turning Kenyan against Kenyan.”

Having lost the conventional war, the al-Qaeda-linked fighters are now on a mission to engage in a different kind of battle – one that requires no guns but plenty of highly manipulative techniques.

The Kenyan government appears woefully unprepared and frighteningly fragile. Just four months away from a national election that could see the country finally shed the memory its 2007/2008 post election violence, it can’t afford to marginalize one of its largest minorities. Come March next year, the Somali vote could prove decisive. Unlike their war-weary cousins in Somalia, Somali-Kenyans are highly educated and invariably sophisticated. They won’t accept being treated as second-class citizens.

As a frequent visitor to Kenya, I often notice how the country is institutionally pre-occupied with an intense competition over who succeeds President Mwai Kibaki. Rival tribes are jostling for power, which would’ve been fine if the security apparatus had the capacity to untangle itself from politics.

The events of the last few days could prove to be a turning point for Kenya. While the country has been able to decimate al-Shabaab fighters in southern Somalia, its shocking failure to protect its own ethnic Somalis (and Somali refugees) constitutes a defeat in the strategic war on hearts and minds. Al-Shabaab has in the past exploited the Somali people when they have felt most victimized. Already, the Shabaab’s effective propaganda machine is hard at work, trying to turn a largely unsuspecting community into a hostile unit.

If Kenya fails to turn the tables against the Shabaab by fiercely protecting the Somali community from the mob justice that befell it, then it’s hard to see how Kenya can ultimately win this developing war within.

Abdi Aynte is a journalist researcher. He can be reached at: abdi.aynte@gmail.com