The Fall of Goma – By Michael Deibert 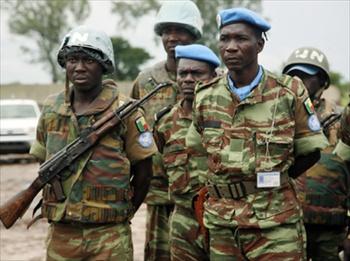 MONUSCO peacekeepers have been largely unable to prevent violence in the Eastern provinces of the DRC.

When the provincial capital of Goma in the eastern Democratic Republic of Congo fell to rebel forces yesterday, the rapidity of the rebel advance was shocking, but the fait accompli failure of both Congo’s armed forces and the country’s United Nations mission was not.

As 2012 dawned, the international community and the United Nations peacekeeping mission in Congo – known by its acronym, MONUSCO (formerly MONUC) – were hailing the peace and stability that a 2009 deal with the Congrí¨s National pour la Défense du Peuple (CNDP) rebel group had supposedly brought to the eastern part of this vast country.

Formed by renegade general Laurent Nkunda, the CNDP’s ostensible goal was the protection of Congo’s Tustsi ethnic group and the defeat of the Forces Démocratiques de Libération du Rwanda (FDLR), the main Hutu-led military opposition to the Tutsi-led government of President Paul Kagame in Rwanda. The FDLR, though a severely degraded force from what it once was, has its roots in Rwanda’s 1994 genocide when several hundred thousand Tutsis and Hutu moderates were slaughtered by extremist Hutu supremacist elements.

Succoured by Rwanda, Nkunda nevertheless proved himself to be a headstrong and unreliable negotiating partner with the regional powers and with the government of Congo’s president, Joseph Kabila, who Nkunda openly talked about toppling. Kabila’s father, Laurent Kabila, had seized power with Rwandan help in 1997 only to then go to war with his former patrons and die by an assassin’s bullet a little over three years later.

As a result of his recalcitrance, Nkunda was jettisoned and replaced at the negotiating table by another CNDP leader, Bosco Ntaganda.  He had been indicted by the International Criminal Court in The Hague in January 2006 on three counts of war crimes allegedly committed while he was helping to command another rebel group in Congo’s Ituri region, a time during which he earned the sobriquet “the Terminator.”

The deal struck between the Kabila government and Ntaganda’s CNDP in March 2009 saw the rebels become a registered political party and their forces integrated within the official armed forces, the Forces Armées de la République Démocratique du Congo (FARDC). Bosco Ntaganda became an important powerbroker in the province of North Kivu, the Rwanda and Uganda-border region of which Goma is the capital.

Far from a road to Damascus moment, the agreement was rather a modus vivendi by cunning, ruthless political operators.

Kabila, reelected in a highly controversial 2011 ballot, has fashioned a government that is in many ways a younger, more sophisticated version of his father’s. Relying on a narrow circle of trusted individuals and a network of international alliances, Kabila’s power is built on patronage rather than a political base. This model was dealt a serious blow when one of Kabila’s most trusted advisors, Augustin Katumba Mwanke, a man who often handled Kabila’s most delicate financial and political transactions, was killed in a plane crash this past February.

Across the border, Rwandan President Paul Kagame, for so long a darling of western donors and development workers, has for many years presided over a tight-lidded dictatorship where government critics meet either death (opposition politician Andre Kagwa Rwisereka, killed in Rwanda in July 2011), exile (former general Kayumba Nyamwasa, wounded in a shooting in South Africa in June 2010) or both (Inyenyeri News editor Charles Ingabire, shot dead by an unknown gunman in Kampala last December).

[Along with other neighbours who have seen fit to intervene in Congo over the years, Rwanda has been happy to help itself to large amounts of the country’s extensive mineral wealth, as documented in a 2001 United Nations report]

As a number of people (myself included) warned at the time, the peace deal as implemented was a marriage of convenience destined for a nasty divorce. Unfortunately, the international community itself gave an additional seal of approval when, against the advice of their own Office of Legal Affairs, UN forces backed Congo’s army as the latter launched Operation Kimia II (“Quiet” in Swahili) in March 2009 against the FDLR.

Despite the common knowledge that Ntaganda – a wanted accused war criminal – was acting as de facto deputy commander for Congolese forces during Kimia II, MONUC’s command hid behind transparently false Congolese government assurances that Ntaganda was not involved.

According to one investigation, between January and September 2009 more than 1,400 civilians were slain in the provinces of North and South Kivu, at least 701 by the FDLR and the rest by Congolese and Rwandan government-allied forces. Over the same time period in the same provinces, over 7,500 women and girls were raped and over 900,000 people forced to flee their homes.

Despite these excesses, the UN signed a Joint Operational Directive with Congo’s army as it launched yet another operation against the FDLR, this one dubbed Amani Leo (“Peace Today”), during January 2010. Immaculée Birhaheka of the Promotion et Appui Aux Initiatives Feminines (Promotion and Support for Women’s Initiatives) pleaded that “the name of the military operation has changed, but the situation remains the same: Women are still being killed, maimed, abused like animals.”

They would have been wise not to look to the UN for help. Though the UN peacekeeping mission in Congo is the largest in the world at nearly 17,000 military personnel, it is still cartoonishly small for a country the size of Western Europe.

Nor has the mission shown any great appetite for adhering to its mandate, which charges it with working “to ensure the protection of civilians, including humanitarian personnel, under imminent threat of physical violence.”

In May 2002, when dissident soldiers mutinied against their commanders in the central city of Kisangani, MONUC troops did almost nothing as those commanders (including Laurent Nkunda) oversaw the killing of at least 80 civilians and a ghastly bout of rape. Two years later, in the city of Bukavu, Nkunda was again present as a series of ethnically-based attacks in and around the city saw looting, raping and murder take place as MONUC did little to aid common citizens. In November 2008, CNDP forces led by Bosco Ntaganda killed at least 150 people in the town of Kiwanja despite the fact that 100 UN peacekeepers were stationed less than a mile away.

Once part of the official apparatus in North Kivu, as pressure grew (as it inevitably would) on Ntaganda to break the parallel chains of command within the FARDC-integrated CNDP units, and with chorus of calls demanding his arrest, the warlord finally decided that the pressure was too much.

By early April of this year, former CNDP members began to desert their posts in North Kivu and fighting broke out around the province. By May, the deserters had named their group the Mouvement du 23 mars, or M23, a reference to the date of the 2009 peace accords between the CNDP and the Kabila government. They operated, as they always had, with strong Rwandan backing.

In July, saying that the Obama administration had “decided it can no longer provide foreign military financing appropriated in the current fiscal year to Rwanda,” the United States announced – for the first time since 1994 – that it was suspending military aid to the Kagame regime, citing “evidence that Rwanda is implicated in the provision of support to Congolese rebel groups, including M23.” That same month, the Netherlands announced that it was suspending five million euros ($6.2 million) in aid to Rwanda, a decision it said was directly linked Kigali’s support of M23. The following day, the British government also announced the freezing of £16 million of aid.

[The recent decision of the UK’s international development secretary, Andrew Mitchell, to restore aid to Rwanda on his last day on the job resulted in a storm of controversy and a pledge by his successor that she would gather evidence in terms of Rwanda’s linkage with M23 before deciding on any new aid.]

But today, with almost-certain Rwandan (and Ugandan) backing and with, by all accounts, barely token opposition from UN forces stationed there, the M23 seized Goma. And tonight, as the United Nations and the international community stand by, the people of Congo are once again at the mercy of those who have tormented them in the past.

The approach of the international community thus far, both in exercising its mandate to protect civilian lives in Congo and in holding the outside supporters of Congo’s rebel groups to task, has thus far proved woefully insufficient.

As word of Goma’s fall spread throughout Congo, reaction was immediate. Buildings belonging to Kabila’s political party – with many Congolese accusing the president of caving in to the Rwandans – were burned in the cities of Kisangani and Bunia, and UN buildings were pelted by stones in the latter town.

The fall of Goma may prove a defining moment, for both the Congolese government and for the gulf between the actions and the words of the international community in the Democratic Republic of Congo.

Michael Deibert is author of the forthcoming African Arguments book The Democratic Republic of Congo: Between Hope and Despair. He is a Visiting Fellow at the Centre for Peace and Reconciliation Studies at Coventry University.

Poor Numbers: how we are misled by ...

How Shabaab is losing the battle, but ...