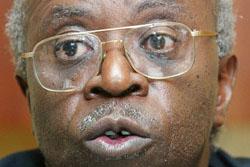 Faustin Twagiramungu returns to Rwanda with the hope of shaking up the political space.

Developments related to the conflict in the eastern DRC indicate a renewed wave of interest in a protracted crisis, which has already lasted for nearly 20 years. In recent weeks, former CNDP leader Bosco Ntanganda handed himself over to the ICC in The Hague, Mary Robinson was appointed the UN special envoy for the Great Lakes region, the Peace, Security and Cooperation Framework for the DRC (and region) was signed and the UN security council approved the creation of an “offensive” combat force with the intent to “neutralize and disarm” all negative armed forces in the DRC. All these elements, taken together, make it appear that serious action is now being undertaken to tackle the causes of conflict. However, two aspects are currently overlooked: the local requirements for peace in the DRC, and the main subject to be discussed here – the impact of future political power shifts in Kigali.

The international community should also not underestimate the impact of internal shifts in Rwanda on the situation in the Eastern part of Congo. The coming years, in the run up to the presidential elections in 2017, will be crucial for Rwanda’s future stability. In this regard, some interesting developments are already unfolding.

On the 27th of March 2013 Faustin Twagiramungu and Gérard Karangwa Semushi announced their return to Rwanda to register their respective political parties; Rwanda Dream Initiative and PDP-Imanzi. This will, theoretically, allow them to run for the 2017 presidential elections. Currently, the political space in Rwanda is very limited, how their return impacts the internal power balances within Kigali will be critical.

Back in 2011, I interviewed both aspiring candidates when I was conducting field research on the Rwandan political opposition in Brussels. I asked them about their political aspirations and on how they see the future of Rwanda.

Faustin Twagiramungu was the prime minister of Rwanda from 1994 till 1995 in the transitional government formed after the Rwandan genocide. Together with Seth Sendashonga, he became critical of his own government, feeling that he was being used as a puppet by the RPF. The pair attempted to challenge the supremacy of the PRF, but their actions were never wholly trusted. Soon after, they fled the country.

Sendashonga was, shortly after, murdered in Nairobi, the details of which remain a mystery. There is, however, a widespread belief that the Rwandan secret services where behind the attack. Twagiramungu arrived in Belgium, where he was confronted with a divided Rwandan diaspora, some afraid that he was still loyal to the RPF. In 2003, he went back to Rwanda to run for the presidential elections but lost to Paul Kagame. After his defeat he returned to Belgium. In the meantime, he worked to build a platform behind which he could develop his own political agenda. But, as he revealed to me, he does not believe in “remote control politics” – he knew he would need to go back to Rwanda to bring about change in the country.

Gérard Karangwa Semushi is a lesser known Rwandan politician who lives in the Netherlands, but who is often in Brussels to interact and coordinate with fellow Rwandans (he is the vice president of Pacte de défense du peuple [PDP-Imanzi]). The president of the party is Déo Mushayidi, currently in prison in Rwanda. Considering that another Rwandan opposition leader, Victoire Ingabire, was also imprisoned when she returned from the Netherlands to run for the presidential elections in 2010, it is a brave decision of Semushi to return to Rwanda.

Semushi arrived in the Netherlands in 2000 after he fell out with the RPF authorities in Rwanda. He was raised in Congo, his parents having fled from Rwanda in 1961 due to the anti-Tutsi upheavals in the country. He states that he always felt he was a Congolese, but the political climate in Congo was slowly changing. Semushi started to be perceived as a “˜foreign’ by those he felt were his fellow countrymen. The growing anti-Rwandan antagonism in Congo motivated him to join the RPF and a desire grew to return to the country of his parents.

After the genocide, Semushi worked for the Ministry of Finance in Kigali. Following that he worked in the private sector, but when the government wanted to change the structure of the revenue authority at short notice he criticized the plans. Perceiving that it was becoming impossible to express such views he decided to leave Rwanda in 2000. He told me that he still has the same aims as when he joined the RPF, “we replaced a dictatorship, with another dictatorship”.

Within the Netherlands Semushi was active within the Higher Inter Rwandan Dialogue, a mainly diaspora organisation, where open and frank discussions were encouraged on the future of Rwanda. Sumushi, however, professes aspirations to hold a dialogue within Rwanda instead of the diaspora, and to establish a roadmap for the country. Once a roadmap was established, Sumushi desired to go into Rwandan politics, but now realizes that a reversal of that order is the only possibility.

The Great Lakes region at large has a long history of diaspora politics, often the nascent political opposition stems from the diaspora and returns to the country to challenge incumbent regimes. The timing of the announcement from Twagiramungu and Semushi is well-planned. Recently, Rwanda has come under increasing international pressure regarding involvement within the eastern part of the DRC, and the recent transfer of Bosco Ntanga to the ICC has made the regime nervous regarding the extent to which he will reveal Rwanda’s involvement and support for the M23.

The international community has of late become came quite distracted from the internal political situation in Rwanda. The country was criticized after the most recent elections for the indictment of Ingabire and as a result donors were increasingly demanding for greater political space. However, since the elections in the DRC and the renewed crisis in the east, the donor community paid less attention to Rwanda’s internal politics.

The elections in 2017, which might seem far away, will be of tremendous historical value for Rwanda. Kagame has indicated on several occasions that he will not run for a third term, something that has been viewed with scepticism by observers. He declared in an interview that he “would have been a bad leader if there was nobody else ready in Rwanda to take over the presidency in 2017″.

With the return of two prominent Rwandan politicians to Rwanda, the internal process for the opening of the political space will soon start off. Thereby, the internal political climate and process in Rwanda will have an impact on transformations within the wider Great Lakes region, and especially in the eastern part of the Democratic Republic of Congo.

Esther Marijnen is a PhD researcher at the Institute for European Studies.