This is the third edition of our Africa Business Briefing, which is published monthly, with business and economics news on the world’s fastest changing continent. To find out more about corporate membership of the RAS click here.

Tax has been grabbing the headlines for the past year with capital flight from low income countries and allegations of corporate tax evasion coming under particular scrutiny. At the centre of the debate has been the role of “˜off-shore’ tax-havens (or, less provocatively, International Finance Centres) in facilitating such practices and the abuse of complex tax-efficiency practices such as transfer pricing.

The United Kingdom has used its one-year presidency of the G8 group of industrialised nations to highlight tax reform as one of its core themes. This was brought to the government’s attention by the advocacy of groups such as the Tax Justice Network. Determined investigative journalism has also revealed how behemoth multinational brands such as Cadbury, Google and Starbucks use corporate tax efficiency schemes to lower their tax bill.

Due to the complexity of the issues, and the fact that several of the tax practices highlighted, though at times iniquitous, are not technically illegal, I have decided to discuss some of the main practices in a morally agnostic tone below, followed by outlining what the main experts and critics of these practices say about them. My own feeling is that the multinational’s corporate arsenal of financial lawyers far exceeds the budgets of most African countries to untangle the complex web of corporate tax law. The law should thus be simplified and amended if change is to be meaningful.

Nicholas Shaxson has pointed out in his book Treasure Islands that offshore centres are not necessarily “˜off-shore’ or located on a dazzling island paradise as is popularly imagined – some of the largest “˜offshore’ centres can be found in major finance hubs such as London, Zurich and New York. You may also be surprised to know that the list includes Liberia, Botswana, and Ghana and Think Africa Press reports here that Kenya may become Africa’s flagship offshore centre.

Offshore centres normally refer to a jurisdiction, which has tax legislation that offers fiscal advantages for non-resident companies choosing to incorporate and transfer capital there. A 1997 IMF working paper by Ahmed Zoromé says businesses in offshore centres are primarily oriented towards non-residents; and normally have a less demanding regulatory environment with minimal disclosure requirements, and low or zero-taxation schemes. It is not illegal for corporations or individuals to take advantage of legal rules through tax-efficiency schemes or estate planning, but where a low regulatory environment and the opacity of offshore transactions involves capital flight, money laundering or tax evasion, it becomes problematic.

According to HMRC, “transfer pricing is the legislation concerning itself with the price charged in transactions between connected parties, as in such circumstances, the price charged may not necessarily be that which would have been charged if the parties had not been connected”. Tax Justice Network translates this into plain English: transfer pricing takes place when two related companies establish a price for a transaction between themselves – for example when US Coca Cola buys something from its French subsidiary.

Transfer pricing is not intrinsically illegal, but Tax Justice Network considers it to be illegal and abusive when companies artificially distort the price during a trade to minimise the overall tax bill. This can easily be done within the same corporate group, for example, by selling goods cheaply to a subsidiary in another jurisdiction – the low profits from the cheap sale therefore results in a lower tax bill. When the good is sold on at a higher price later in the supply chain, the profits are normally distributed to one of the group’s entities in an offshore centre, where little or zero tax becomes payable.

Development economist Paul Collier has demanded urgent action on tax. Collier says the Google and Starbucks cases have shown the countries of the G8 are “now themselves beset by the corporate opacity that Africa has faced for decades. By putting our own house in order, we will at last truly be doing something beneficial for the global poor.” Richard Dowden, Director of the RAS, has also written here on the urgency of the G8 to make this issue at the top of its agenda.

David Cameron surprised many of his critics in his championing of tax reform. Some businesses even asked the PM to tone down the rhetoric (reported by The Guardian here). Cameron, however, returned from the G8 meeting at Lough Erne promising swift action. African Union Chairperson Nkosazana Dlamini Zuma, however, felt that discussion on tax should not have been tagged on at the end of the summit, which was largely dominated by the crisis in Syria. A recent book by Nick Shaxson and John Christensen warns that a further danger is the over-financialisation of tax haven economies, can compromise the politics of those countries in a similar way that the “˜resource curse’ does for commodity rich states.

Ronen Palan says a new dependency theory is emerging which suggests that the net flow of capital from the developing to the developed world does not see it transferred or invested there, but rather the “financial resources from developing countries joins a large pool of capital registered in offshore locations” – this has continued “unabated” for over three decades. Palan says the combined transfer of financial assets from low and middle income countries to offshore accounts is estimated at approximately US$10trn, representing nearly 10 times Africa’s GDP. The outcome for poor countries from illicit flows through capital flight, banking secrecy and the abuse of a globalised business environment will further compound and exacerbate poor governance, a large “˜black’ economy, a lack of capital for infrastructural projects, and an over-reliance on aid money that generates deleterious political-economic dynamics, says Palan. But he warns that developed countries will also lose out through growing income inequality and the weakening of the universal tax base.

South Africa’s economy has been a cause of concern, with the Rand at a four year low. At the time of writing, the currency sat at 15.81 to the Pound and 10.23 to the US Dollar. The V-Lab chart below shows the Rand’s movement in the past 36 months. South Africa’s high interest rate makes the Rand a favourite currency in the carry trade, and it has been prone to speculative attacks in the past, but these new headwinds point to some concerns around the current account deficit and other fundamentals. 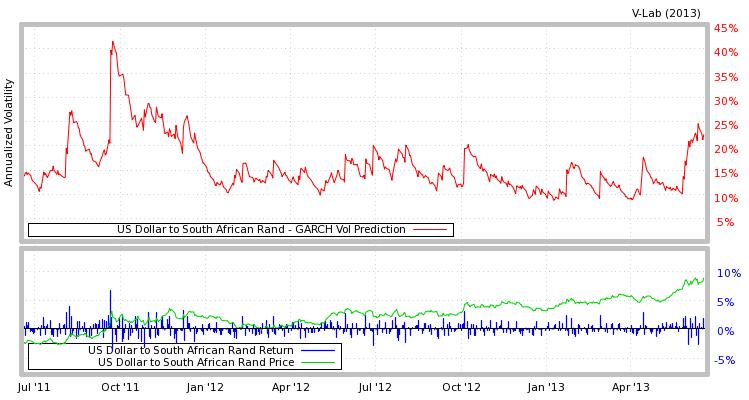 Analysts have attributed the rand’s most recent drop to a flight from gold by investors. The South African Reserve Bank has offered a long-term explanation for the rand’s depreciation over the past 12 months as being due to “apprehension about a range of factors including South Africa’s comparatively large current-account deficit, loss of international competitiveness, electricity-supply constraints, labour unrest, the possibility of weaker global demand for commodities, and concerns about further sovereign debt downgrades”. The outcome for South Africans will be higher than expected inflation.

Economic growth in South Africa has also deteriorated, with the lack of coherence around economic policy, and investors’ negative sentiments about Jacob Zuma’s abysmal speeches commonly being hauled out as the main factors. This lends more cadence to those analysts betting that Nigeria is soon to overtake South Africa as the continent’s economic powerhouse. The Economist reports here that South Africa can no longer muddle through, as its economic woes point to a deeper malaise related to inequality and joblessness.

THE SEASON OF ECONOMIC OUTLOOKS

It has been the season of economic outlooks for Sub-Saharan Africa. Hot off heels off the World Bank’s Africa’s Pulse, which I discussed in the previous business briefing, has been the OECD report, the Africa Progress Panel outlook, the IMF outlook, and the AFDB’s outlook. Comment on these would be welcome, which of these are most useful to our readers?

Adam Green reports in This is Africa that Tullow has won its $400m Capital Gains Tax (CGT) dispute with Heritage Oil in Uganda. The case arose when the Ugandan government made a demand for CGT from Tullow following the sale of around $1.5bn of Heritage’s assets to Tullow in 2010. Tullow has long denied any wrongdoing in the matter, but Heritage says it will appeal the ruling.

Bloomberg and Business Day Financial Mail (BDFM) yesterday announced that they are collaborating in local and international business television programming on a newly-branded local channel, Business Day TV, as Biz Community reports here. BDFM has recently undergone a series of significant management changes, with its holding company, AVUSA, being purchased by a unit of Mvelaphanda Group, and renamed the Times Media Group.

About 200 illegal Chinese miners were arrested, and expelled from Ghana earlier this month. China has been keen to downplay the impact of the event on its relations with the country, as it does not want to threaten its expansion plans on the continent. Ghana too, has been keen to limit the fallout and the impact on Sino-Ghanain relations. President Mahama said in London last week that the arrests were due to some laws that only allow small scale mining to be undertaken by Ghanaian citizens, and not the result of negative sentiment towards the Chinese.

ZAMBIA TO DOUBLE ITS POWER OUTPUT