‘La Lucha’ – Goma’s own brand of Indignados – By Kris Berwouts 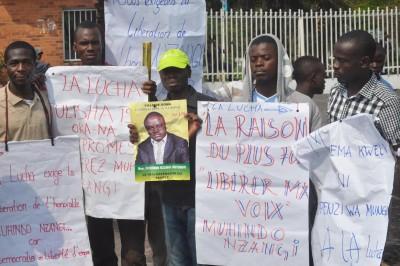 The Indignados of Eastern Congo protest against the imprisonment of local MP Nzangi Butondo.

I can’t remember exactly when I first heard about them, but suddenly they were there. Not as a new organisation with a clear leadership, goals or statutes, but rather as a permanent buzz. You knew they were somewhere out there, even if you did not see them. Suddenly they came together at one place, made a lot of noise for a while and then disappeared just as quickly.

Friends asked me if I knew more about them. Not really. I had heard something about a sit-in. I heard that the governor of North Kivu had called them “tomorrow’s terrorists”. Someone had spent time in prison. “˜La Lucha’ had clearly become something, but what exactly? I could not capture it from where I live, 7,500 km away from Goma. Fortunately, I had some time to spend answering some of these questions during my last visit to North Kivu in December 2013.

I first spoke with Micheline. She was there from the beginning and was one of the initiators of “˜La Lucha’.

“It started almost two years ago. I felt frustrated. We saw a lot of money circulating in the Congo but but it was as if things were turning around in circles. You heard speeches and analyses about the 2011 elections, they were exactly what we heard back in 2006. And no doubt we will get more of the same in 2016. We didn’t feel much hope for real change. Apparently, the problems in our country were insoluble. But that was something we couldn’t accept. Why did everything go wrong in this country over the last decades? Nevertheless, there were people of good will all over the place. Something had to be done.

“We came together with a few friends. The first meeting was in March 2012. There were six of us, all young people. We all had a long itinerary behind us of commitment to all sorts of civil society organisations.  Some had even created their own associations. But it didn’t feel like we were getting anywhere. We thought it was time to act. There were enough groups for discussion and analysis, but no one ever seemed to be willing to do something. So we decided to focus on action.

“On May 1st 2012 we organised our first action – on Labour Day. But we immediately renamed it “˜Unemployment Day’. That seemed much more appropriate for today’s living conditions in Congo. All of us emptied our pockets for some dough to buy  cloth and markers to make banners. The action was successful  and the media talked a lot about us, even though we did not have a name yet.

“We were very happy with the result and immediately started to plan a new action for Independence Day on June 30th. We decided to spread messages about the lack of drinking water and security. We wanted the government to resign: you have failed. In different places in Goma we distributed pamphlets.

“That was an action model they weren’t used to. I was arrested by the cops and had to spend some time in jail. Two friends stayed with me. This is not a country where you can leave a girl in the hands of the security forces.

“Things get tough sometimes. In our sit-in of February 2013 for instance. There we were again, claiming access to drinking water for everybody. This time, we also demanded that the rehabilitation works on the  main road here in town would be completed. They had started them earlier that year, but the work had been interrupted for no reason at all. Some of us were severely beaten during that action, but they resumed the works on the road anyway.”

Not an organization but a movement

“It was not until January 2013 that we chose a name. We were having a drink after a meeting and toasted “˜A la lucha!’ – “˜To the struggle’ in Spanish. The phrase sounded good. We kept it as a name. Since you can’t give a Spanish name for a Congolese organization, we decided to use ‘Lucha’ as an acronym for “Lutte pour le Changement,” the struggle for change.

“But, in fact, we are not an organization. We don’t have any ambition to become one. Even less are we an NGO. NGOs do not fight for change, they fight for money. In a way, civil society became a caste of Mandarins that are part of the establishment. We do not feel connected to these people .

“No organization, no structure, no hierarchy. We don’t need statutes  nor a board of administrators. We don’t try to get officially registered. Our actions cost money but we are not looking for donors. We try to mobilize the necessary funds by scratching the last francs from our pockets. Even if it has  already happened that we have had to cancel an action because we lacked a hundred dollars…

“We want to remain a movement. Meanwhile, about eight hundred people have participated in one way or another in one of our actions, all of them younger than 35. The only structure that we know is the G10, a strategic unit with ten of our most experienced people. We do a lot to stimulate internal debate. What kind of democracy do we want? How can we achieve it? You know how severely the quality of education decreased here over the last decades. The level of analysis is very low, also in our own ranks. Capacity building is a major challenge for us.

“We are writing a “˜Manifesto for the new Congo.’ It is also almost ready. The Governor here has tried to tell people that we are allies of M23, but nobody believed that. The kind of analysis we make is difficult to put in one camp or another. None of us is a member of a political party.”

Others join us: Fred (an economics student) and Serge (a young doctor).

“We organised several sit-ins in front of Monusco’s headquarters in early 2013. This basically happened each time UN bigwigs Mary Robinson or Herve Ladsous were in town. We thought that Monusco was not protecting the people. We are the generation that demands the peace that it has never known. We have campaigned against the arrival of a neutral power. How can you be neutral here? We demanded an adjustment of the mandate of Monusco and we are pleased that it materialized. It made a lot of difference.

“The first target of our actions is the provincial parliament here in Goma. We elected those people, they are accountable to us. We find that they don’t put enough pressure on the provincial government to make access to water, electricity and jobs a right for everybody. These are priorities for the people.

“You know, everything here is now cooked in an NGO sauce. Even the provincial government pours everything into logical frameworks, with indicators to reflect results and impact etc. It all looks great and professional but it’s hard for me to see the public interest behind the pep talk. I can’t help having the impression that all the flashy tools hide a lack of vision.

And then of course there is the Nzangi case. On August 11th 2013, national MP Nzangi Butondo was arrested. A few days later, he was sentenced to three years for “˜undermining national security’.

“Nzangi was convicted because he said what he thought on the radio. During the parliamentary holidays he had visited Rutshuru and Niyaragongo, which were still occupied by M23 at that time. In an interview on the local free radio (Kivu One), he talked about the suffering and the frustration of the population there. He said  that the supreme commander of the army (Kabila ) and MONUSCO had to undertake urgent military action against M23: they could stop M23 if they really wanted to. Shortly afterwards he was behind bars. We were seriously shocked by the way he was arrested, jailed and condemned. If a representative of the people is being treated like this despite his immunity, what will protect us – ordinary citizens defending human rights and freedom of expression?

“Nzangi is our MP and is very popular with the youth here. Since 2006 he was a Member of Parliament at the provincial level in North Kivu, since 2011 with a national mandate. The fact that his party is part of the majority never stopped him being critical. As a provincial MP he submitted a motion of no-confidence against the governor, and more recently he criticized  a national minister from his own party because of the man’s poor performance. For Nzangi, public interest is more important than party discipline.

“His arrest shows how bad things are “‹”‹here when it comes to freedom of expression. There is a lot of paranoia and the head of state is a  taboo subject. Once more we campaigned in the streets, but the cops violently dispersed us. Five of us spent a night in jail. Local media were forbidden to publish pictures of our action

“The last few weeks have been very busy here. In preparation for Kabila’s tour to the east, various ministers came to Goma. We took every opportunity to discuss Nzangi’s case. The official structures of civil society did not react: “˜We cannot take a position in this, it is a political issue. This is outside our mandate …’ To be honest, it often happens that civil society doesn’t take a standpoint as long as they do not know which way a case is going … ”

Micheline: “We brought our message about Nzangi and the rest of our demands even to Kabila himself. There was quite a crowd in the streets that day. But the people who cheered him were to a large extent the same guys who cheered M23 when they entered Goma a year earlier, even if they didn’t mean it. They will be there again to cheer Kamerhe when he comes to the east, one of these days. You know how things go here: with a little money or some cold drinks you can mobilise a lot of people.

“So we stood there at the side of the road with our banners and placards. We demanded Nzangi’s release of course, but we also referred to the unfulfilled promises about electricity, water and infrastructure. One of us got near to the president and asked: “˜Your Excellency, did you see our message?’ “˜I did,’ he replied. He later confirmed that in public.

“There are quite a few Congolese and foreign NGOs sending all kinds of recommendations and smart  solutions to our problems around on the internet. But that day, we stood there alone with our critical slogans, between the flatterers, the doormats and the acolytes.

To conclude, I wanted to know what they thought of Kabila’s stunt when he came by road from Kisangani to Bukavu. A spectacular attempt to win back the hearts and minds of the people in Kivu. Did that create a new situation?

“We were not impressed . The whole trip was a high profile show, but fundamentally nothing changed. He didn’t go into dialogue with the population. This is not the first time such a thing has happened, we are used to it by now. Of course it gives his fans and supporters something to talk about, but the common man has become too suspicious to draw energy or courage from it. We consider it a non-event .”