Choosing to be a Dinka: selecting ethnicity remains an elite privilege 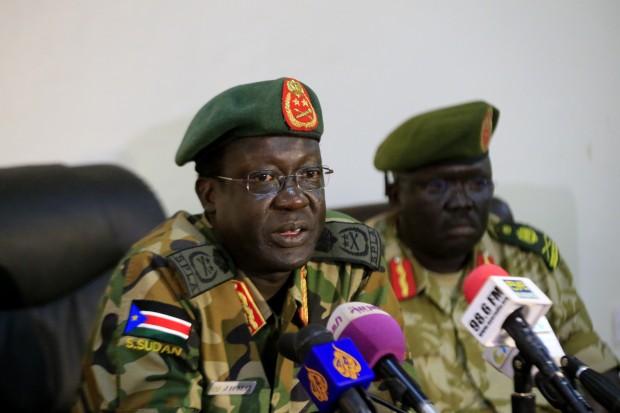 Chief of Staff of South Sudan’s army, General James Hoth Mai, is often held up as an example of someone who had refused to take sides on ethnic grounds between the Dinka and Nuer .

“Yin acÉ”l?” means “˜What is your name?’ in Dinka.  They say that in Juba in December 2013 people were asked this question.  If you could not answer, then you were shot.

There is a pervading narrative now that hundreds of Nuer were targeted in Juba by a Dinka dominated government.  Ethnicity determines whether you were the victim or the aggressor – highlighting ethnicity’s relationship to violence in South Sudan.  Ethnicity, in this case, was determined by language.  Others were assumed to be Nuer based on their area of residence.

Violence first erupted in Juba on the 15th December 2013 inside the presidential guard.  It quickly engulfed the city.  Within ten days, the conflict had spread across the eastern side of South Sudan with large battles occurring in Bor, Malakal and Bentiu.  Many soldiers defected to join the ranks of the opposition, challenging government authority in their locality and violently seizing control.  The fear of targeted Nuer persecution prompted many Nuer soldiers, commanders and people in the home communities to mobilize militarily against the government.  This formed the heart of the opposition and allowed the conflict to spread across the country in just a few days.

The conflict quickly adopted an ethnic appearance – a violent Nuer opposition to a Dinka dominated government.  In South Sudan few doubt the political and military saliency of ethnicity.  Fighting occurred on a larger scale in areas where Nuer and Dinka reside together, such as in urban centres and in SPLA barracks.

Seeking instant identification in Juba, language was used to distinguish Nuer from Dinka.  Yet, language itself provided no clear distinction.

For example, whilst they are considered Dinka, the Atuot of northeastern Lakes State speak a language of their own that more closely resembles Nuer. This is the home community of Telar Deng (a close presidential advisor), and the Atuot were not the target of government.  Yet, their language nearly allowed them to be mistaken for the other group.

Many privileges distinguish the elite in South Sudan.  One such thing is that their political-military alliance has also become part of ethnic identification for the elite.  When violence erupted in December 2013, both the government and opposition were eager to highlight that the conflict was not ethnic.  To do this they listed examples of the range of ethnic groups represented by the elite in their group.   Yet, a more common local explanation in South Sudan is not to recognize this multiplicity of ethnicities but to describe the changed ethnicity of the person who picks an alliance that it not consistent with the majority of his ethnic group.  A person “˜becomes’ a Dinka if he supports the Dinka president.

The Economist reported that James Hoth Mai (SPLA) is an example of someone who had refused to take sides on ethnic grounds between the Dinka and Nuer.  Yet, for many in South Sudan, James Hoth’s ongoing presence in the  SPLA is equivalent to government support.  This makes him a Dinka.

This is not the first example of the reconstruction of elite ethnicity in South Sudan in the context of the political dynamics of the SPLA.  Much ethnic construction has taken place over time drawing on symbols associated with ethnicity to reconstruct identity.  Ethnicity is often associated with language, culture and lineage.  The assumption that these characteristics are relatively inflexible creates notions of the static, long-term nature of ethnic identity and loyalty based on ideas of ethnicity.

During John Garang’s leadership of the SPLA he sought to create long-term, static loyalties to himself and his leadership through construction of identities that drew on ethnic ideas.  Garang reconstructed the ethnicity of the Garangists (people close to Garang) as Dinka not just through promotion but through drawing on symbols associated with ethnicity.  One task was to try to unify the Dinka including those from Jonglei and Bahr el Ghazal.  Yet, beyond that, he also wanted to incorporate into a more Dinka-aligned identity those who he trusted and promoted.

People promoted into the leadership of the SPLA by Garang, and who became dependent on his patronage for their success, were known as Garangists.  Many Garangists and other soldiers in the SPLA learnt the Dinka language.  This promoted identity with Garang but was also a practical decision for many soldiers to allow them to understand communications and avoid marginalization.  Learning the language allowed them to assimilate into the Dinka identity and benefit from any preferential treatment.

In addition, Garang sought to include many of these Garangists in his family through marriage and when opportunities for marriage were exhausted in his own family, he used the female relatives of close, trusted army commanders.  This drew on traditional social obligations amongst the Dinka and other South Sudanese communities that would tie the children of these marriages and, therefore, the family as a whole to relationship with Garang.

James Hoth’s association with the Dinka identity has taken place over time.  Born as a Jikany Nuer from Ulang, he joined Garang’s SPLA in the earlier years at the time of his graduation from the University of Malakal in 1983.  He was trained in both Ethiopia and Cuba, and became one of the key Garangists.  Hoth is also married to a Dinka Ngok from the Abyei region, a Dinka group long associated with Garang.  In the 1990s, when many Nuers defected, he remained loyal to Garang and his SPLA.  This was perceived by many as Hoth’s denial of his Nuer identity in favour of a Garangist or Dinka identity.  It is even said that Hoth turned down the Vice Presidency in 2013 as he did not believe he represented the Nuer community and would not be accepted by them as their representative.

Since 2005, increasing Nuer soldiers, including many formal rebel groups, have been absorbed by Kiir into the SPLA.  For example, the Juba Declaration in 2006 incorporated the large South Sudan Defense Force under the leadership of Paulino Matip into Kiir’s SPLA.  However, Kiir did not seek to craft a longer-term loyalty drawing on ethnic narrative during this integration.  In a new time of prosperity with the control of much oil wealth, maybe he was confident that financial incentives would be enough to glue the elite together.  Yet, with the turning off of the oil and the eruption of violence in December 2013, these loyalties seem less secure.  Garang’s introduction of the reimagining of ethnicities appears to be a more stable strategy of control.

With shifting political alliances, people also selectively highlight lineages to reconstruct their identity.  For example Riek Gai is usually described as a Nuer and has become President Kiir’s leading Nuer figure.  Yet, now, many Nuer are highlighting his Dinka origins.  Riek Gai is from a Dinka family that, generations ago, assimilated into the Jikany Nuer.  While assimilation into the Nuer usually prompts a permanent description as Nuer, his current alliance with a Dinka president prompts people to highlight his Dinka lineage and identity.

Yet, while these known personalities appear to have the space to select their ethnicity, most in South Sudan have no such option.  In Juba, Bentiu, Bor and Malakal since December 2013, many were killed because of the language they could not speak.  With assumptions of association between ethnicity and territory, many were killed because of the area they lived in.  Villages were burnt to the ground because they were Nuer or Dinka.  Government forces killed Nuer chiefs who had been active in serving the government and had historically questioned the Nuer opposition.

Yet, despite their political alliance, their ethnicity did not change.  They were Nuer and assumed to be in opposition.  They had no option to change sides and were perceived as a legitimate target for violence.  For the anonymous majority, there is no ability to select ethnicity.  It is even difficult to select political alliance.  The last two months have proved to people that military forces decide their identity.  Therefore, people fear and fight along deepening ethnic boundaries.

The author lives and works in South Sudan.

Incompetent, under-resourced and uninformed – the international ...