Waiting for the Blue Helmets: More gloom from CAR as crisis passes 18 months – By Magnus Taylor 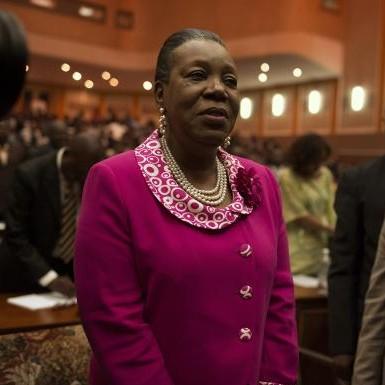 President Catherine Samba-Panza’s transitional administration has been largely unable to halt violence in the CAR.

The crisis in the CAR has metamorphosed from a lightening storm of rebellions, coups and emergency military deployment into a low rumbling groan of desperation from a country whose government and institutions have all but collapsed. Its people now await a new UN peacekeeping mission scheduled to arrive in September 2014.

For the UK, which has no diplomatic representation in the CAR – historically seeing it as being within the French sphere – large international aid organisations and NGOs such a CAFOD, which organised an event in parliament yesterday with the APPG on the Great Lakes, are an important point of contact.

At this event, Sandy Moss, Deputy Head of FCO Central Africa, strove to explain UK policy, whilst Sarah Covington from IHS (a strategic risk advisory) spoke on the current situation and possible future scenarios for the country.

The estimable Bishop Nestor of Bossangoa also provided a “˜front-line’ account of the situation in the country. According to CAFOD, 41,000 people have taken refuge in the bishop’s diocesan compound in Bossangoa and are being provided for by the church.

The situation in the CAR currently seems to be stabilising a little after a period of very rapid change from Dec – March 2014 which included the resignation of President Michel Djotodia, election of Catherine Samba-Panza and escalation of anti-Muslim violence.

According to Covington, since March there has been some coalescing of small militia groups to form larger entities with some ideological direction. Such groups are operating in a more premeditated fashion and are likely to try to exert some sort of territorial control. However, it remains unlikely that the country will be partitioned.

In April, Chad withdrew its armed contingent (numbering 850) from the CAR.  It has subsequently closed its northern border with the country. Both these actions signaled the end of Chadian-led attempts to move people around, or out of the country – particularly the Muslim population, which the Chadians had been quite effective at managing.

Elections are scheduled to take place in early 2015 to facilitate the transfer of power from Samba-Panza’s transitional government to a democratically elected administration. The current failure of the CAR to hold elections has impinged on programmes to re-constitute and re-arm its national army. International donors will not attempt a rearmament programme until after the elections. However, owing to the current fragile security state of the country it is highly unlikely that these will be held when scheduled. Lengthy delays seem inevitable.

Sandy Moss stated that the UK has contributed largely through technical advice and support of the AU military contingent in the country and via the work of the Department for International Development (DfID).

Additionally, the UK has played a significant role in giving political and diplomatic support so that the international community maintains a strong focus on the CAR. He added, however, that whilst the CAR was an important focus at present, the international community should make sure that its work there does not detract from what is being done in other countries such as Somalia and eastern DRC.

Opinion within the room was somewhat split over the role of the French in this crisis. Whilst one floor speaker suggested that with their strong diplomatic and military strength in the country the French should have “˜seen it coming’, both Moss and Covington pointed out that the French had committed significant resources both to keeping M’Poko airport in Bangui open – vital for on-going humanitarian efforts – and for the wider actions of Operation Sangaris (the French military deployment in December 2013).

It was commented that in comparable conflict situations, solutions are greatly dependent on regional actors all “˜pulling in the same direction’. In the CAR this has clearly not been the case, most clearly illustrated by the actions and subsequent withdrawal of Chad. However, whilst regional dynamics are important, the real problem in the country has been a lack of long-term governance.

As Moss says, the priorities in CAR are clear: to halt violence and restore some “˜governance functions’; not necessarily through government though as other institutions such as the churches have greater institutional capacity.

African Arguments is keen to promote good writing and analysis on the CAR. Please get in touch if you would like to make a submission: mt74[at]soas.ac.uk