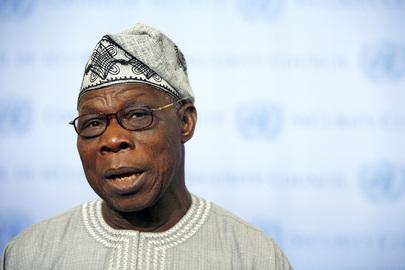 Former Nigerian President Olusegun Obasanjo, who spoke at the launch of his book, ‘My Watch,’ in London.

“I am not just an armchair critic. I have been through it” said former President of Nigeria Olusegun Obasanjo  in London last night. Obasanjo was Nigerian Head of State from 1976 – 79 and 1999 – 2007 and was promoting his new book, My Watch which has been banned in Nigeria.

Obasanjo’s enduring influence was illustrated earlier in the week when, at a launch event in Nairobi, he made headlines by appearing to endorse opposition All Progressives Congress presidential candidate and former military ruler General Muhammadu Buhari in his bid to unseat incumbent Goodluck Jonathan, the leader of the People’s Democratic Party (PDP),  in polls originally scheduled for this weekend.  Obasanjo was one of the founders of the PDP.

The former president was more guarded about his own voting intentions this time over. He said: “When the time comes for me to vote, I will consider the track record of all the candidates that are contesting and I will assess and based on my assessment for who I believe have the best track record to perform the job of the Nigerian president, then he will have my vote.”

Hardly a ringing endorsement to ‘Vote Buhari’ – more a grandfatherly lesson in civic education. He did however defend the former ruler’s academic credentials, recently impugned by his opponent due to an unfortunate difficulty in locating his school leaving certificate.

According to Obasanjo, the fact the Buhari went through military staff college means that he attained the equivalent of a Masters degree anyway. Said the President: “Instead of campaigning on real issues we have degenerated to campaigning on trivialities.”

OBJ also refused to comment substantively on the recent postponement of the election, ducking the question somewhat by saying that “I was in Munich at the time”. But in an interview for the Financial Times earlier in the week he mused that “The signs are not auspicious…I don’t know whether a script is being played”.

Obasanjo may not be an armchair critic, but the regularity and vehemence of his attacks on his presidential successors, Yar’Adua and Jonathan, suggest a desire to distance himself from the men whom he played a crucial role maneuvering into power. This followed the blocking of his own attempt to achieve an unconstitutional third term in 2007.

On this occasion he described the Yara’Dua presidency as “the looting of Nigeria”, whilst Jonathan’s tenure got the less specific, but not less damning “a very bad situation”. In the book he describes Jonathan’s tenure as being characterised by: “ineptitude, ineffectiveness, inefficiency, carelessness, callousness, insensitivity, cluelessness and selfishness”

Many Nigerians understandably have questions over how Obasanjo, who generally steered the ship of Nigeria with consummate skill, could allow such incompetence, inefficiency and criminality to once again tarnish the highest office in the land.  When questioned on whether it might have been better to handover to his Vice President Atiku Abubakar, Obasanjo impatiently snapped back that “with what I know about Atiku, if I’d put Atiku forward and groomed him as my successor, God would not have forgiven me.” A reasonable rejoinder might be: “Why did you make him Vice President then?”

When faced with a question from RAS Director Richard Dowden on his former Financial Crimes (corruption) Commissioner Nuhu Ribadu, who opined (in communications with the US Ambassador to Nigeria) that graft was worse under OBJ than his successor, Sani Abacha, Obasanjo, barely believably, said that he hadn’t seen this particular correspondence, despite the fact that it came to light in 2011 and made headlines in Nigeria at the time.

Despite moments of thinly-veiled irritation at any attacks on his own character or performance, Obasanjo is surprising optimistic about the future of Nigeria, which he says is “very rosy”. Not without justification, OBJ believes that Nigeria has all the human capital it needs to be a wealthy and successful country and, even in the midst of the oil price collapse, “if we can stop leakage, even at $50 per barrel we can manage the economy.”

If Obasanjo had a message for Nigerians it was that they should not simply settle for poor leadership because that is what they are used to:

“Nigeria (has) a population of 180million and you wouldn’t have anybody other than one person or two persons that can run the affairs of Nigeria? What the hell are we talking about? For me there are millions who can run the affairs of Nigeria that are not even coming out. So why should you die on behalf of one who is probably performing as a mediocre.”