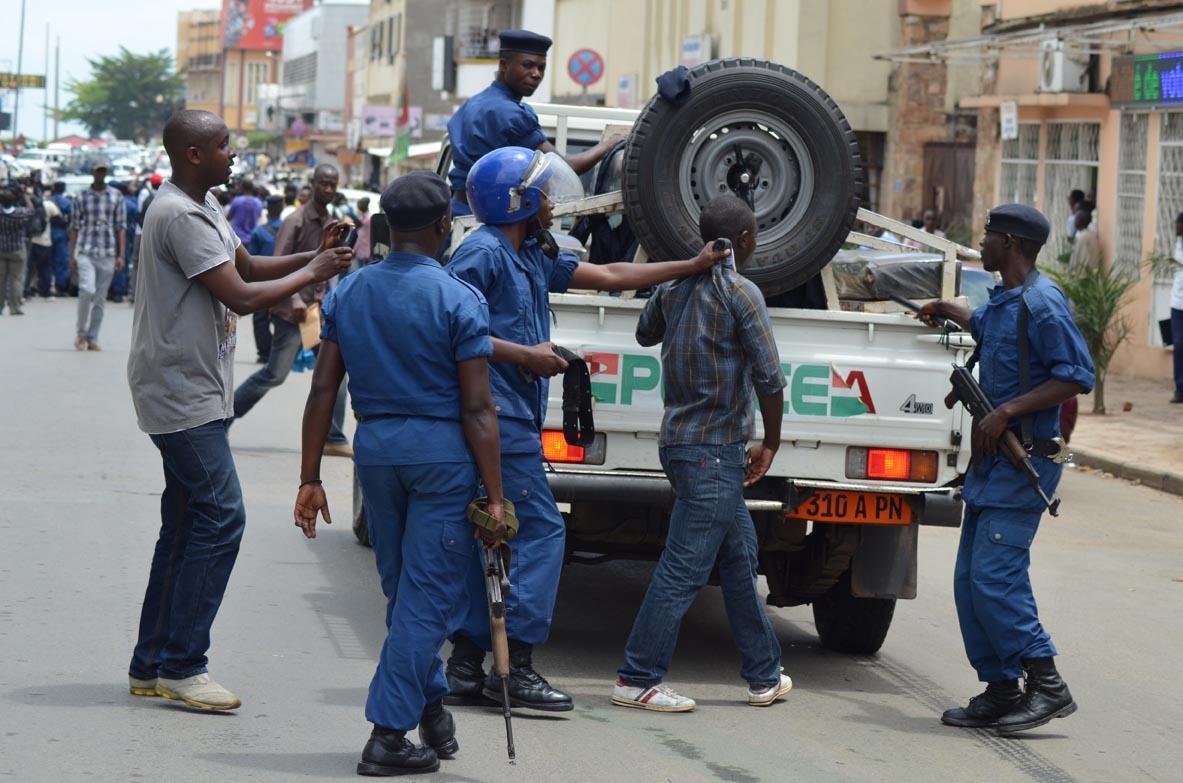 Police arrest a protester in Burundi

Burundi’s parliamentary elections took place on June 29th (despite efforts to delay them) and were boycotted by most opposition parties following claims of fraud, irregularities and violence during the election process. The European Union, African Union, East African Community and United Nations Secretary General have asked that the elections be postponed until the opposition and the government can agree on how to ensure a transparent and inclusive process.

Protesters against the third term of the president were advised to stay indoors – advice which most of them followed. Two days before the legislative elections two people were killed in overnight attacks. Witnesses in the Jabe neighborhood of Bujumbura reported intense gunfire in an apparent police crackdown on areas seen as hosting anti-third term protesters.

More than two months after demonstrations started, insecurity reigns in many parts of the country. When the non-violent protests began, nobody envisioned that they would be met with such harsh repression, leading to the death and detention of many protesters. Civil society organizations and opposition parties are paying a high price for their revolt.

The Association for the Protection of Human Rights and Incarcerated Persons (APRODH) says that at least 70 people have been killed since late April in protests over Nkurunziza’s bid to remain in power. This means that on average, a new person has been killed every day since the demonstrations started. The victims are not only on the side of the protesters. Eleven police officers were wounded in a string of overnight grenade attacks on police stations across the capital. But most of those who have been killed are from the protesters’ side.

“It is a strategy to target influential mobilizers to break off the movement against the third term of the president Nkurunziza. Demonstrations will end and [those already in] power will win the elections,” says Gérard Birantamije, a lecturer at the Université de Lac Tanganyika in Bujumbura. He believes that the use of state violence towards protesters shows that the government is afraid of the opposition and that the protesters are their main enemy.

Rather than engaging in dialogue with the opposition, civil society and the international community, the government of Burundi has adopted an attitude that has created fear and insecurity.  The government of Burundi refused to participate in the round table when the United Nations led mediations to reduce tensions and help Burundians settle their differences peacefully.

It is reported that blacked-out cars from the Security Intelligence Agency are circulating during the night to take suspected protestors away for imprisonment and torture, or even to kill them. People living in the neighbourhoods that have seen the heaviest protests have taken to organising night patrols and erecting barricades to prevent police vehicles from entering their areas at night.

Despite their efforts, night-time shootings have claimed many lives. For example, at Ngarara in Bujumbura on 12th June, two boys were shot dead by people in police uniform, shooting from a police vehicle.  Meanwhile at Nyakabiga one protester was killed on June 10th by what appeared to be police.

Opposition leader Zedi Feruzi, the president of the Union for Peace and Development (UPD), was killed on the street on May 23rd. Witnesses to the murder say the gunmen were clad in uniforms similar to those worn by the presidential guard.

Reports of other killings by security intelligence agents and members of the Imbonerakure – the youth movement of the ruling CNDD-FDD – are rampant, but hard to verify. What is clear however is that nobody is being held responsible for the death and disappearance of the protesters.

Rumours of the existence of a death-list have circulated in Bujumbura for weeks. It is said that on this list are the names of political figures and civil society activists, as well as the organizers of the protest movement against the President’s third term. Most of these people have gone into hiding.

Agathon Rwasa, the former chief of the National Forces for Liberation (FNL) and the main opponent of the ruling party, complains that on 27th June 2015 two of his party members were arrested for political reasons.  As opposition party members, they were considered to be protesters against the president’s intention to run for a third term.

Anyone who participates or supports the protests against the president’s intention to seek a third term is in danger. This is exemplified by the fact that even the renowned Burundian humanitarian Marguerite Barankitse, also known as the “˜mother of the nation’, was forced to flee. Over a hundred thousand civilians have chosen to leave the country in recent weeks. Some of them were stopped at the border between Burundi and Rwanda and forced to stay.

Life is extra precarious for those in the media profession. Armel Uwikunze, a journalist at the IWACU press group, which publishes the main independent newspaper in Burundi, lives under constant threat. He was warned by a member of the ruling party (who was paid for denouncing any person who doesn’t support the president) that he can be killed at any time.

Earlier this week a grenade was thrown at the house of Diane Nininahazwe, a correspondent for Voice of America, a day after she received an anonymous death threat. She said the threatening texts came from a blocked number and she does not know who was behind the attack.

The position of opposition leaders and organizers of the movement against the third term of the president remains the same. They call their followers to boycott presidential elections scheduled for 15 July. Agathon Rwasa, the FNL leader, says that the election results will not be recognized either by the opposition or the international community. “˜”˜For us there were no parliamentary elections on 29 June” says Pacifique Nininahazwe, a civil society group leader who is opposed to the president.