The economist celebrated for putting inequality on the mainstream agenda visited the world’s most unequal country. 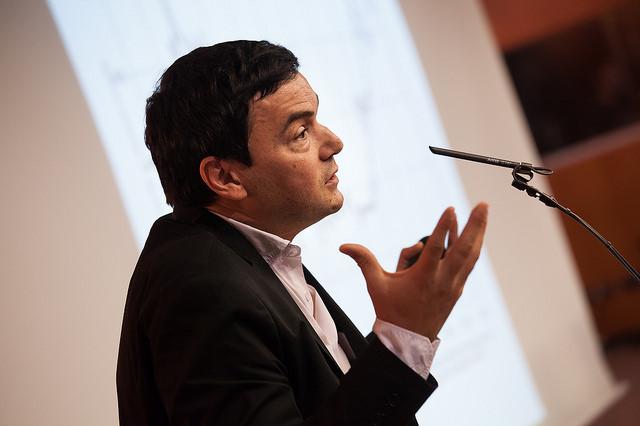 French socialist and economist Thomas Piketty was in Johannesburg last week to deliver the 13th Annual Nelson Mandela Lecture. While it’s now a huge cliché to refer to him as the “˜rockstar economist’, there is no denying Piketty’s arrival created a flurry of hype among savants and dilettantes alike – united in the fact that few of them had actually read his magnum opus Capital, pretty much like the other famous Kapital*.

Piketty was received in Africa as if the Pope or MJ were in town. Attending the lecture at the University of Johannesburg’s Soweto campus required facing an epic traffic jam in the blistering heat, fending off maniacal minibus taxi drivers and queues around the block. Piketty’s Capital in the Twenty-First Century topped the New York Times Bestseller list for nonfiction and is Harvard University Press’ bestselling imprint ever at around 2 million copies. Not bad for a 700-page tome on economics.

But is the hype justified? And why has no-one noted the irony of a book on the topic of inequality priced at $15?

The popularity of Piketty’s work on inequality is partly due to its timely coincidence in the wake of the Occupy campaign and anti-austerity movements. But on this occasion, it may have been the straightforward poignancy of the world’s expert on inequality giving a talk in the most unequal country in the world that drew the crowds. South Africa’s Gini co-efficient, a measure of income inequality, is at an embarrassingly high 0.7.

Piketty, an experienced traveller who arrived a day late in South Africa due to not having a blank space in his passport, seemed nearly moved to tears by it all. “Firstly, excuse my English, which sounds a lot like French”, he said. “But to be here at the Nelson Mandela Foundation is so very special – the fall of apartheid and the fall of the Berlin Wall defined my politics as I came of age.”

A native of Paris, the precocious Piketty completed his doctorate on wealth and redistribution at the age of 22 and later went on to advise one of the bright stars of the French gauche caviar scene, Ségolí¨ne Royal, during her campaign for the presidency. It was recently announced that he will also be advising the newly-elected UK Labour leader Jeremy Corbyn.

The central thesis of Capital may be summed up as r >g , which means that returns to capital exceeds economic growth. Unless intervened upon, he asserts, this leads to worsening inequality.

Orthodox economics will point out that some inequality is necessary to create incentives and competition, and Piketty does not shy away from this. But the problem arises when inequality becomes sticky and systemic, as it has in South Africa.

In fact, Capital begins with a recounting of South Africa’s own Marikana tragedy of 2012 when over 30 protesting miners were shot dead by police in the worst state violence of the country’s democratic era. “This episode reminds us that the question of what share of output should go to wages and what share to profit – in other words, how should the income from production be divided between labour and capital? – has always been at the heart of distributional conflict,” writes Piketty.

South Africa is a textbook case highlighting the dangerous belief in GDP growth as an indicator of progress. It also presents valuable lessons for the rest of Africa, where recent strides in economic development have not usually been accompanied by inclusive growth and meaningful advances in human development.

The case of South Africa is further tragic because political liberation since 1994 has not been accompanied by economic liberation, and racialised inequality has by some measures become more pronounced. As the Nelson Mandela Foundation notes, “intergenerational inequality is growing in the post-apartheid era, putting the dream of freedom and prosperity out of reach for many South Africans”.

Asked why he thought this was the case, Piketty told African Arguments, “the rise in neoliberal economic policy and the trend towards financial deregulation more or less coincided with the fall in apartheid”.

It is a well-known narrative of South Africa’s recent economic history that Nelson Mandela had to make several compromises with the ANC’s social democrat agenda to keep South Africa’s international investors happy. This, in part, led to the over-financialisation of the South African economy and is now a hallmark of Mandela’s economic legacy.

South Africa’s relative inequality and jobless growth somewhat supports the r >g thesis. Exacerbating this is the amplification effect whereby some economists believe that inequality also impedes growth. This is seemingly borne out in the fact that economic growth in South Africa has slowed down to less than 2% of GDP per annum from highs of around 5% in the early-2000s when the country seemed to be profiting from “˜the Mandela dividend’.

As if this were not enough, inequality can also contribute dramatically to the unravelling of social cohesion and an increase in social violence and violent labour relations. Socio-economic inequality was cited by rating agency Moody’s as a key driver in its rationale for South Africa’s credit downgrade shortly after Marikana. The ratings downgrade has slowed down foreign direct investment in the productive economy and has also slowed down growth.

The violence witnessed at Marikana and South Africa’s rate of 49 murders per day clearly shows growing inequality’s effects on political stability and democracy. Piketty said that he did not have a “very good answer” as to why South Africa is so much more violent than its neighbouring Namibia and Botswana which exhibit similarly high levels of inequality, but that he did “know that people get violent when they become very frustrated and if something is not done this will only worsen”.

However, Piketty did have some direct suggestions for the big beasts of land reform, a national minimum wage, illicit financial flows to tax havens, and black economic empowerment. He also did not shy away from suggesting a low-rate wealth tax on South Africa’s 1-5% people who own around 65% of the country’s wealth and of whom 80 % are white, making racialised inequality stubbornly structural.

Piketty asserts the wealth tax he proposes meanwhile would also promote transparency in the reporting of estates. He believes this is essential because data on the assets of the wealthy in South Africa is currently so poor. And while South Africa’s business leaders may not be in favour of his stance on taxation, his views are finding sympathy from the ANC economic transformation committee.

Sometimes it takes an outsider to point out the elephants sitting in plain sight: “Generally speaking, I would say…equality in formal rights are not sufficient to reach real equality…I would argue that we now need to think harder about how to secure effective rights, including the right to work for a decent wage, the right to good quality education, the right to have access to property, and finally, and maybe most importantly, the right to real economic and political democracy including sharing of economic power in companies and participatory governance in the public and private sector”, he said.

Dr Desné Masie is a geopolitical economist with particular interests in financialisation and African Affairs. *She has only read selected chapters of Marx’s Das Kapital and Piketty’s Capital.