From the enthralling story of a man on the run in Cí´te d’Ivoire to a remarkable documentary about making music in a Sudanese war zone, here are five African films you won’t want to miss. 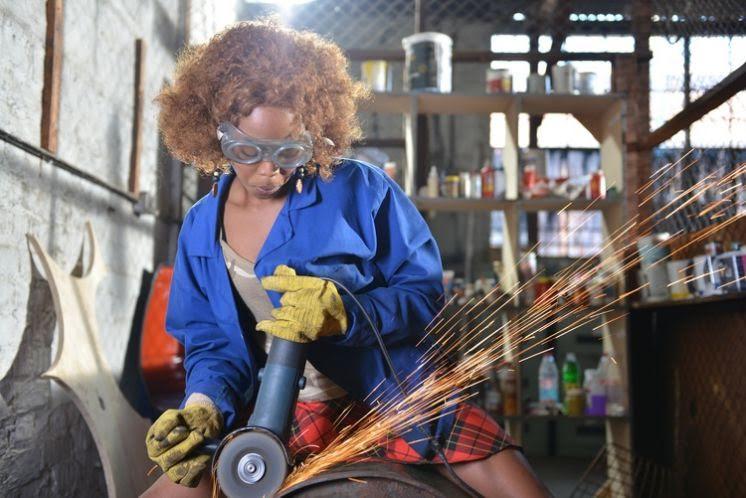 Ayanda, directed by Sara Blecher, is a colourful tale about a female mechanic in South Africa.

Later this month, the annual Film Africa Festival in London will feature around 65 of the best contemporary African films. African Arguments picked out five of the most original, exciting and interesting features and documentaries set to screen.

French-Ivorian filmmaker Philippe Lací´te masters the art of the personal-political drama in this epic centred on the flawed hero called Run, who, Forrest Gump-like, finds himself at the centre of a series of key political events in Cí´te d’Ivoire. The film begins at the end with Run shooting the Prime Minister, and we unravel the story from there.

Run, so called because he runs away from each key event in his life, is told by his mentor that he is destined to be a rain-maker. However, along the way he meets Gladys, a professional eater, and joins the Patriotic Youth, a militia-cum-gang which promotes the idea of ivoirité, a nationalistic ideal which has contributed to violence around past elections.

Run is an enthrallingly original take on the politics of identity through the eyes of a maverick opportunist who grows into a sense of morality and disgust at the turn things are taking in his country. The different angle taken on the issue of xenophobia in Cí´te d’Ivoire earned the film a selection in the Cannes “˜Un Certain Regard’ category.

Hope may seem an ironic title for a film about the desperation and violence facing migrants voyaging north from West Africa. But hope of a better life in Europe âˆ’ “where mosquitoes drink Coca-Cola [and] donkeys speak”, as one character jokes âˆ’ is just about the only thing that can survive such a brutal journey in which all else is vulnerable.

The film, the first fiction feature by French director Boris Lojkine, centres on the relationship between two migrants âˆ’ Léonard, a Cameroonian man, and Hope, a Nigerian woman âˆ’ as they head north. The two pair up when Léonard is the only one in a group traversing the Sahara to take pity on Hope after she is raped by soldiers. The relationship goes through phases of pragmatism and even exploitation when the couple have to survive in a makeshift migrant ghetto in Algeria in which self-appointed “chairmen” and their posses rule the roost.

As reports of African migrants and refugees dying en route to northern shores continue to pour in, Hope paints a realistic, devastating and moving portrait of the brutal journeys migrants face in trying to reach North Africa, not to mention the next hazardous leg onto Europe.

Beats of the Antonov (Sudan)

This powerful documentary gets its name from the Russian Antonov planes the government uses to bomb the Blue Nile and Nuba Mountains in the ongoing civil war. However, for many of those under attack, the primary battle being waged by Khartoum is not one of military gain but of culture. President al-Bashir is trying to impose an Arabic-Islamic identity onto Sudan’s richness and diversity, they say, and as such, the main weapons at refugees’ disposal are not guns, but the maintenance of their traditions.

In this remarkable and colourful documentary by Sudanese director Hajooj Kuka, we are embedded amongst some of these Sudanese refugees fighting for their identity and dignity in the southern periphery of the country. In refugee camps, we witness local musicians jamming flamboyantly using instruments they’ve strung together using pipes, buckets and discarded materials. And we listen to girls and women who’ve composed choruses with haunting lyrics such as “they burdened you with the ammunition” and “this boot is too big for you”.

Kuka spent time in camps over two years to gather the footage for Beats of the Antonov. Watching the film allows the viewer to feel like they’ve had the privilege of living amongst the courageous and ever hopeful Sudanese refugees in the wilderness of southern Sudan for a short time too.

This feature film by Ethiopian-Israeli director Bazi Gete opens with a long scene in which a stubborn, wiry old goat is dragged in fits and starts to what we presume is its slaughter. This uncomfortable and protracted episode stands as a metaphor for what’s to follow in a complex and honest portrayal of an old man and his traditions rubbing up against new ones.

The film centres on an Ethiopian Jewish family in Israel and follows a couple of weeks in the life of 74-year-old Meseganio Tadela, the family patriarch, who moved to Israel 28 years ago.  After his wife dies and he sells his home, Tadela visits his children and their families who welcome him in, though beneath the respectful pleasantries simmer differences of values and expectations.

With patience and sensitivity, Red Leaves explores questions of family and generational change that are no doubt familiar to diaspora all across the world, though towards the end when the Israeli police make an appearance, the film also examines issues specific to Israel’s often fractious relationship with its Ethiopian population.

Ayanda explores gender in the vibrant melting pot of the new South Africa as well as universal themes of loss, remembrance and determination. The eponymous protagonist takes charge of her late father’s garage and strives to bring it back from the edge of financial disaster by upcycling vintage automobiles. Ayanda’s resolve is tested but she resists, using her creativity to build a successful business. A strong female role model, Ayanda is beautifully acted by Fulu Mugohvani, famous in South Africa for her roles in soap operas.

Set in Yeoville, a thriving and diverse neighbourhood in Johannesburg, the film reflects intelligently on the multiple origins of South Africans today. Filmed in snappy vignettes and framed as interviews by Ayanda’s Nigerian photographer friend, the film’s  sequences take us around the whole continent through people’s travels on their way to South Africa.

Strong female characters are few and far between in South African mainstream TV and cinema, as director Sara Blecher told African Arguments. Ayanda is therefore rare as a complex and flawed yet inspiring and believable female protagonist. Mature, thoughtful and joyous, Ayanda offers a unique insight into today’s South Africa, a society in which the role of race is frequently examined but gender is often overlooked.

James Wan is the editor of African Arguments. He tweets at @jamesjwan and blogs at jamesjwan.com.