The opposition to President Nkurunziza counts both Tutsi and Hutu amongst its number. But the cross ethnic nature of the resistance is in danger of being undermined. 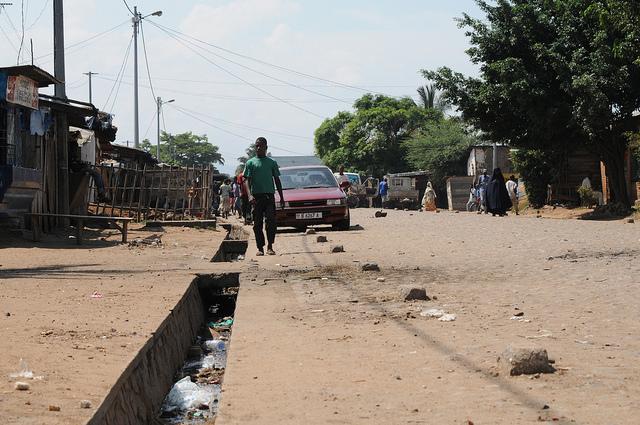 On the streets of Bujumbura, capital of Burundi. Credit: SuSanA Secretariat.

Since independence in 1962, Burundi has experienced no fewer than six flare-ups of conflict, which have been triggered by political disputes and turned into ethnic violence. The longest of these conflicts was the 1993-2005 civil war, which pitted a largely Tutsi government and army (Forces Armées du Burundi [FAB]) against largely Hutu rebel groups.

During this period, neighbourhoods in Bujumbura became almost entirely ethnically segregated due to targeted violence. This resulted in a Tutsi-dominated city with Hutu enclaves.

Extremist Tutsi youth organisations acted as a key driver of anti-Hutu violence, while claiming to be protecting Tutsis against genocide. Meanwhile, Hutu youth formed militant ‘self-defence’ organisations to protect their remaining neighbourhoods. The rebel force which went on to become today’s ruling CNDD-FDD party emerged from some of the latter groups.

After a long and bloody 12 years, the civil war finally came to an end. And the ensuing peace accords (most famously the 2000 Arusha Peace and Reconciliation Agreement) and new constitution strived to move the country beyond ethnic divisions.

For instance, the 2005 constitution enshrined power-sharing between the Tutsi (who make up 14-20% of the population) and Hutus (who make up 80-85%) in parliament and all levels of government. Furthermore, it called for the integration of both former soldiers and rebels, in equal numbers, into the new military. Post-war integration also led Bujumbura’s neighbourhoods to become ethnically mixed again, though most areas retained (at least perceived) ethnic majorities.

This peace process facilitated ten years of relative peace for Burundi, but in 2015, the country returned to crisis.

The origins of this current turmoil are rooted in President Nkuruznziza’s decision to run for a third term, which opponents say violates the constitution and Arusha Agreement. This move by the president – who is himself a Hutu (of mixed ancestry) and former rebel – brought large protests to the streets of the capital in April 2015. These demonstrations were notable for including both Tutsi and Hutu.

On 13 May, following a crackdown by police and factions of the Imbonerakure (the youth wing of the ruling CNDD-FDD), and amidst mounting protester casualties, army officers staged a coup. However, this attempted overthrow, which included both former FAB and former rebels, was quickly defeated by forces loyal to Nkurunziza.

In the aftermath of the failed coup, police and Imbonerakure cracked down on continuing protests, including through targeted arrests and killings. This pushed many supporters of the coup, particularly from the military, to defect to nascent rebel groups.

The escalating violence also led to the formation of neighbourhood ‘self-defence’ groups in so-called ‘protester’ areas of the capital. These militias have carried out gun and grenade attacks against police and ruling party targets. Attacks against three military bases in Bujumbura on 11 December were attributed to both neighbourhood militant groups and soldiers who defected to the rebellion. Although both opposed to Nkurunziza, however, these groups do not necessarily co-ordinate their operations and have in fact been antagonistic towards each other at times.

Despite the cross-ethnic nature of the opposition, leading government figures in the aftermath of the attempted coup in May immediately presented resistance to Nkurunziza’s third term as a ‘Tutsi cause’ with most protests in ‘Tutsi areas’ of Bujumbura. This was in spite of the fact security forces found themselves grappling with both Hutu and Tutsi protesters.

CNDD-FDD leaders have also claimed (and are supported to an extent by a leaked UN report) that the opposition and rebellion is backed by Rwanda, led by Tutsi President Paul Kagame who in November accused the Burundian government of “massacring” its people.

By this strategy of invoking ethnicity, the CNDD-FDD leadership – now in alliance with independent MPs led by Agathon Rwasa (formerly leader of the Hutu FNL rebel group) – seems to be attempting to polarise the conflict along ethnic lines and thus rally the Hutu majority to Nkurunziza’s cause.

Furthermore, according to the UN High Commissioner for Human Rights, Zeid Ra’ad Al Hussein, the 11 December attacks on Bujumbura military bases were followed by reprisal killings in majority Tutsi neighbourhoods in which police are alleged to have systemically targeted Tutsi youth for execution while mostly sparing Hutus.

Over a hundred people were likely killed in this attack, many of whom were subsequently buried in mass graves by security forces. Witnesses during this and other operations alleged that police and Imbonerakure asked residents “Where is Kagame to save you?”  and accused Hutus who remained in ‘protester’ neighbourhoods of sympathising with anti-government rebels.

Fear has gripped those who remain in these neighbourhoods, with many inhabitants painting over their house numbers in the hope of avoiding targeted reprisals.

These reprisal killings and attempts to ethnically homogenise Bujumbura’s neighbourhoods – with ‘protester’ neighbourhoods containing only Tutsis and ‘loyalist’ neighbourhoods receiving their Hutu outflow – represent the greatest threat to the currently cross-ethnic nature of Burundi’s opposition.

This ethnic homogenising would leave only Tutsi recruits available to youth self-defence militant groups and the umbrella organisation attempting to unite them, the Resistance for the Rule of Law (RED-Tabara). RED-Tabara is suspected of being behind recent grenade and mortar attacks against police, Imbonerakure, and government targets in the capital.

For its own purposes, Nkurunziza’s government is likely to make use of Burundi’s aforementioned history of extremist Tutsi youth organisations to portray RED-Tabara as a Tutsi, anti-Hutu organisation. This may be helped by RED-Tabara’s alleged links to the predominantly Tutsi MSD party, which the government has historically made (largely unsubstantiated) accusations against of being linked to Tutsi extremists.

Moreover, armed groups such as RED-Tabara may in fact be at risk of radicalisation; MSD youth already reportedly distribute pamphlets claiming that a genocide of Tutsis is underway, playing into old fears of Hutu youth and extremist narratives.

Meanwhile, many Hutu youth who follow Agathon Rwasa have also left the opposition since he joined Nkurunziza’s government after the July elections. This, coupled with Burundi’s history of Tutsi youth violence and the homogenising of opposition militant recruits, will likely add credibility to the government’s portrayal of RED-Tabara and other armed opposition groups as Tutsi organisations.

This perception of armed opposition groups could drive the radicalisation of predominantly Hutu militia and youth groups. The Imbonerakure is already divided into several largely autonomous factions, and the youth groups associated with the (predominantly Hutu) FNL party – many of whom previously took part in the protests – are divided over Nkurunziza’s third term and Rwasa’s alliance with him. The widespread belief that their youth and neighbourhoods are being targeted by Tutsi militants is likely to re-activate these Hutu groups back into their original role as local ‘self-defence’ forces.

The outlook for future violence

The ethnic polarisation of Burundi’s conflict (away from the current cross-ethnic opposition) and increase of violence driven by extremist youth militants on both sides could increase the scope of ethnically-targeted killings such as the alleged reprisal attacks on 11 December.

This situation might have echoes of Rwanda’s 1994 genocide, but there are key differences that make similar mass killings less likely. For instance, the government has not engaged in a sustained country-wide campaign of hate speech targeting Tutsis, nor are the Imbonerakure sufficiently unified throughout the country to carry out such atrocities at short notice.

However, fighting between increasingly mono-ethnic and autonomous youth militant groups could push Burundi back in the direction of its own history of ethnic violence. During the previous civil war, around 300,000 people were killed across 12 years, with many of them being civilians targeted for their ethnicity.

Ultimately though, it seems that the question of whether Burundi’s present conflict remains political or whether it becomes ethnically-driven will be answered on the streets of Bujumbura – streets that increasingly house only either Hutus or Tutsis.

Jordan Anderson is the lead Burundi and African Great Lakes analyst for IHS Country Risk and IHS Jane’s, focusing on political and security risks in the region.