“Just let us fight, and the war will end” – a review of Justine Brabant’s new book on the eastern Congo

Over plates of bugali and cups of hot tea, Brabant met with countless militants across the Kivu regions and asked them questions as straightforward as: Why do you fight? 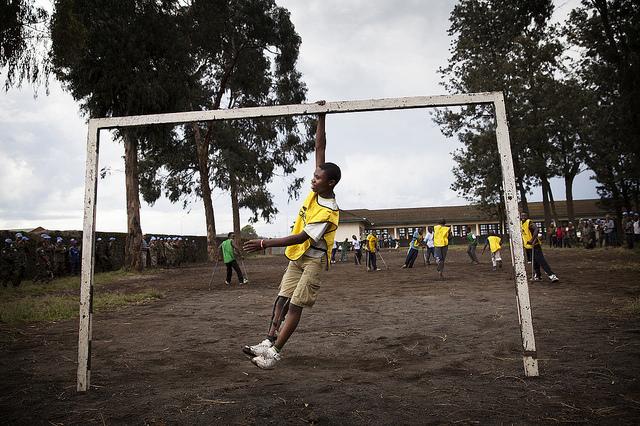 Take Nicholas Kristof’s unfortunate attempt to dubiously extrapolate the number of victims in the eastern Congo from another dubious extrapolation, for instance, or the assertion by Jeffrey Herbst (an otherwise diligent scholar) that “There is no Congo”. It is testament to Justine Brabant then that she takes on this tricky challenge but with very different results.

In Qu’on nous laisse combattre, et la guerre finira (“Just let us fight, and the war will end”), the French researcher and journalist meets with those who “have too long lived with war”, the protagonists of a politico-military landscape in the regions of North and South Kivu, and listens to their spectacular stories. Seasoned militia leaders such as the late Zabuloni Rubaruba, Janvier Karairi, Albert Kahasha, Donat Kengwa, and Amuri Yakutumba are just a few of the eastern Congo’s historic figures she encounters on her journeys between the mountainous hauts plateaux of Uvira, the impenetrable forests of Shabunda, and the lush green hills of Masisi.

In line with the books subtitle – Avec les combattants du Kivu (“With the combatants of the Kivus”) – Brabant tries to make sense of the multiple contradictions which frame today’s armed conflicts. Squeezed into over-freighted first-generation land rovers with villagers and traders, escorted through rainy season swamps by Sherpa-like combatants, or sharing a narrow seat on the region’s countless moto-taxis, Brabant’s journey takes her across myriad regular and irregular checkpoints to some of the eastern Congo’s most remote towns and villages.

Once the people she meets with come to terms with the surprise of “that young white female visitor” turning up on their doorstep, discussions emerge around shared plates of bugali (the Kivutien staple dish), Primus beers, and plastic cups of hot tea.

How did your movement come about? Why do you fight, and whom? What is the reason for your combat? How is life as a rebel? Much of the book is about questions as intimate and obvious as these, but most of the time it is precisely these basic questions visitors to the Congo fail to answer.

Not so Brabant. Her discussions lead her to understand both the very technical aspects of life in the maquis – such as how to maintain discipline in a rebel movement or how to obtain communication and other equipment – as well as the ideological and historical underpinnings of the region’s armed mobilisations.

On the latter in particular, Brabant offers a set of insights that are as fascinating as they are sometimes confounding. We hear why someone like Fujo Zabuloni, a militia leader who has been blowing hot and cold over whether or not to integrate into the regular army, is yet to definitively leave the bush. With the Raia Mutomboki, a scattered bouquet of nationalist local militias that emerged in the fight against remnants of invading Rwandan rebels, Brabant ends up musing over the (in-)competence of NGOs and UN agencies. And while talking to other cadres, Brabant hears confessions of militants’ aspirations to get a job with those same international organisations. Eastern Congo, as I have had the chance to experience myself, is crammed with countless seemingly contradictory stories such as these.

Written in beautiful though simple language, the book bridges the gap researchers often feel when researching and living in the Kivus. How can outsiders – especially those from Europe – describe the reality of such a place without succumbing to clichés or being condescending, glorifying, or judgmental? Brabant succeeds by giving a voice both to those we tend to see as villains and those we consider victims. She thoughtfully deconstructs some of the “dominant tales”, as Séverine Autesserre put it, about the Congo, be they myths around the “world capital of rape” or that of “conflict minerals”.

In the shadow of big headlines, Qu’on nous laisse combattre, et la guerre finira has the depth of an excellent ethnography, the engaging writing style of reportage, and the rigour of academic fieldwork. It joins a range of rare great works on the Congo such as Jason Stearns’ Dancing in the Glory of Monsters and David van Reybrouck’s Congo. Une histoire.

[Qu’on nous laisse combattre, et la guerre finira is available in French and is out on the 10 March 2016.]

Christoph Vogel is a Researcher at the University of Zurich and a Senior Fellow at the Congo Research Group, New York University. Follow him on twitter at @ethuin.