Rwanda claims its withdrawal from an African Court declaration just as that court was about to begin Victoire Ingabire’s hearing was pure coincidence. 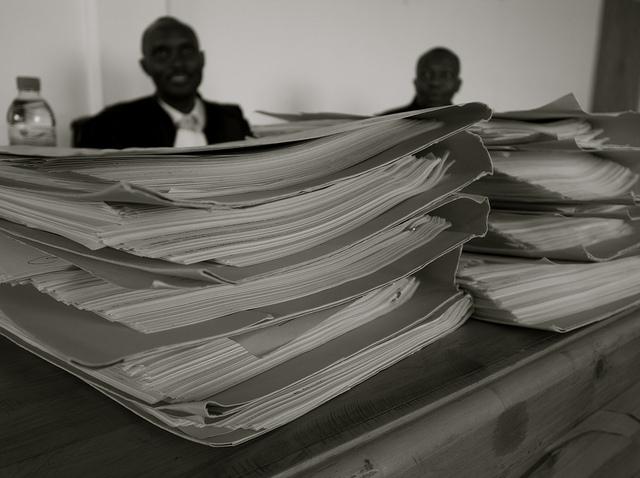 At the trial of Victoire Ingabire in 2011. Credit: Graham Holliday.

During an African Union (AU) summit in early February, it was decided that Foreign Ministers would prepare a roadmap for the continent’s withdrawal from the International Criminal Court (ICC).

The reason for this move, according to a growing group of African leaders, is that the ICC is “anti-African”, “humiliating” and a threat to sovereignty. This argument refers to the fact that most of those indicted or being investigated by the Court are African, though given that the victims of the abuses focussed on by the ICC are also mostly African, from a people’s perspective, the ICC could be seen as distinctly “pro-African”.

Nevertheless, plans were put in place for the AU to abandon the ICC – even though only individual states can withdraw, not the Union as an organisation – and to set up an alternative African court, one that is expected to offer immunity to the continent’s Big Men.

In these decisions, one of the most prominent voices was President Paul Kagame, even though Rwanda is not party to the Rome Statute in the first place. Kagame has criticised the ICC for being “selective” and discriminating against the continent.

However, recent events suggest that the president is not just worried about the international court, but African courts as well. Or rather, it seems that the thing Kagame is really concerned about is not international justice or African justice, but independent justice.

Victoire Ingabire, one of Rwanda’s few opposition leaders, is currently languishing in jail, serving a 15-year prison term for “conspiracy against the country through terrorism and war” and “genocide denial”. These charges are widely believed to be politically-motivated and the judicial process that convicted Ingabire was deeply politicised and marred by executive interference, including by Kagame himself.

In light of her sentencing then, Ingabire filed an application with the African Court on Human and Peoples’ Rights (ACHPR), seeking several orders and remedies. The case was eventually set for a hearing on 4 March 2016.

As this date approached, Ingabire’s legal team were clearly obstructed. In February, her lawyer was searched and his legal papers read by police. He was refused access to his client to prepare the case, and the prison management drastically reduced her visiting regime. Ingabire’s Dutch co-counsel was also declined a visa, thus preventing her from preparing the case with her client. Rwanda had also previously sent a 24-page response to Ingabire’s application asking the court to declare it “vexatious, frivolous and without merit” and dismiss it.

Finally, on 29 February, just days before the trial was due to start in Arusha, Rwanda decided to opt out of the declaration it made in 2013 that allowed individuals to institute proceedings in application of article 34(6) of the Protocol on the Establishment of an African Court on Human and Peoples’ Rights. At more or less the same time, Benin was joining the seven African countries that signed up to the declaration.

As the case was initiated before Rwanda opted out, it remains to be seen whether the country’s withdrawal will prevent the court from examining Ingabire’s application or not.

As the African Court on Human and Peoples’ Rights is as African as the baobab tree, what these events suggest is that Rwanda’s problem is not with any sense of anti-African bias or external interference into the continent’s affairs. Rather, what it fears is independent justice and the possibility that the African court might act impartially, unlike Rwanda’s domestic courts, and expose the political nature of Ingabire’s conviction.

In its justification for withdrawing from the court, the Rwandan government has attempted to suggest the move has nothing to do with Ingabire. It claimed instead that “the decision to withdraw from the declaration was reached after a genocide convict and fugitive secured a right to be heard” in a separate case. Referring to a complaint brought by Stanley Safari, a former senator convicted of killing Tutsis during the 1994 genocide, Rwanda’s Justice Minister stated that the government “informed the Court last year that we would take serious exception if Safari was allowed a platform in the African court”.

However, Rwanda never suggested it would withdraw from the declaration. And even if it had, the timing of Rwanda’s decision to act on its concerns from “last year” and withdraw just as the controversial and potentially significant Ingabire case was due to begin would be one huge coincidence.

The reality is that to believe the official account would of course be naïve, and what this whole saga really reveals is how little confidence the Rwandan government has in the quality of its own justice system. This should make third countries think twice before granting extradition requests on the basis of assurances by the Rwandan government about judicial fairness and independence.

(Two major Rwandan officials were asked to comment on a draft of this paper, but they did not answer repeated requests.)

Filip Reyntjens is a Professor of Law and Politics, Institute of Development Policy and Management, University of Antwerp.