How black bin bags and common sense helped end an epidemic, and what we can learn from it

Rather than formal health systems, it was local common sense, allied to local ingenuity, that was crucial in ending Ebola. Is it time for a bottom-up citizen science? 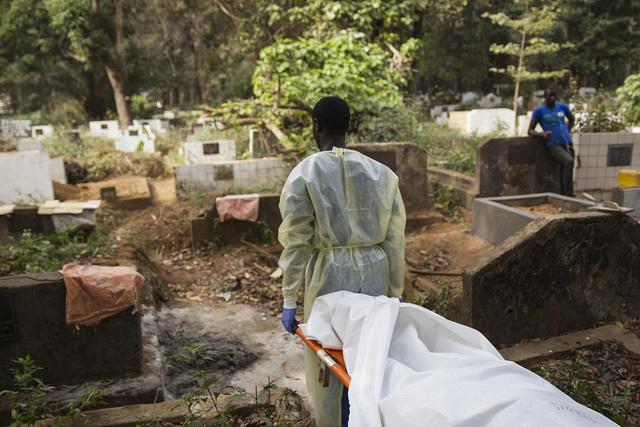 Burials were a particular point of danger in the transmission of the Ebola virus. Credit: UN Photo/Martine Perret.

In an essay famous among anthropologists, Clifford Geertz once tried to tie the notion of ‘common sense’ to culture.  By insisting common sense was culturally-embedded, Geertz appeared to rule out the possibility of empirically grounded local knowledge capable of rapid shifts as circumstances change.  In short, there was no place in Geertz’s framework for the notion of citizen science.

This hypothesis was put to the test by the recent Ebola epidemic in West Africa.  The disease was unprecedented.  It was unknown in the region until December 2013.  It figured in no local cultural repertoires and posed a challenge to local understandings about the correct manner of handling death and burial.

And yet the Ebola epidemic was overcome in a matter of months, and a large part was played by a local response based on observation and common sense.  Communities learnt how to assess the risks posed by the disease independently of prior cultural assumptions, and local empiricism allowed cultural rules to be reviewed, suspended or changed as epidemiological facts emerged.

In the aftermath of the Ebola outbreak, the international community is rushing to rebuild formal medical systems. These systems were weak before the epidemic struck, and it will be important to strengthen them against the multiple other killer diseases neglected during the Ebola epidemic.

However, we should be clear that these formal systems were beside the point as far as Ebola prevention was concerned.  What actually ended the epidemic was the introduction and acceptance of new and safer ways of handling the sick and dead.  Local common sense, allied to local ingenuity, contributed much to this success.

One example of this is Fatu Kekula, a Liberian trainee nurse, who was unable to find a facility to receive sick members of her family, and so opted to care for them at home, improvising protection for herself with black plastic bin liners.

This is one of the best-known stories (thanks to a CNN broadcast) but is just the tip of the iceberg.  And as detailed fieldwork progresses, much more information is coming to light about the extent of local adaptive responses.

In an isolated village on the edge of the Gola forest in Sierra Leone, for instance, a young woman outlined the biosafety hazards when conveying an Ebola patient to hospital by hammock.  The standard procedure when a case of Ebola was suspected was to phone a help line and wait for an ambulance and trained crew, clad in protective clothing, to transport the individual to a treatment facility.  But here, there was no phone coverage and no road for the ambulance. As in many villages in remote rural regions, the only means of patient transport was the village hammock and a crew of young volunteer bearers.

International responders devised many biosafety protocols for handling suspected cases, but never one for hammocks. Yet our discussant envisaged all too clearly that a swinging hammock and a vomiting patient would be a recipe for further infection, and that the carriers would need to improvise some protection. Plastic raincoats were one of the suggested options.

Given that Ebola is only spread by contact with body fluids, burials were another particular point of danger, since culture dictates quite elaborate procedures for preparing the body for its last journey. But communities came to accept – albeit  not without much sadness and complaint – that a no-touching rule had to be applied to end infection chains.

Either bodies had to be handled by specially-trained and equipped burial teams, or equivalent practices had to be adopted and applied by local volunteers when it took days for official teams to arrive.  Again, the evidence now being collected is rich in stories about improvised safe body handling techniques developed with the assistance of the ubiquitous strong black plastic bag.

There is an important question underlying this evidence: How did community members start to think like epidemiologists?

After all, at the outset, the rumour mongers were rampant.  Almost every official pronouncement about Ebola was contested by some local know-it-all, and worse, in places with mobile phone coverage, by some know-it-all with a Twitter account.

However, matters changed when Ebola struck a community. Ebola is a social disease, and patterns of infection soon become empirically clear to community members rich in social knowledge.

Corpse washing or visiting the sick are duties indicative of a proper degree of social concern, and are closely monitored for breaches. People take note if a duty is shirked, and this flagged the perverse tendency of the disease to attack those most diligent in carrying out their duties to the sick and dead.

Direct empirical inferences were soon drawn about the role of visiting the sick or corpse washing in sparking further illnesses, thus preparing the way for an acceptance of the need for the rapid (if temporary) suspension of certain high-risk burial practices.

The experience of Ebola in Upper West Africa shows that culture, empiricism and common sense are not joined at the hip as Geertz hypothesised. Citizen science is alive and well in all three Ebola-affected countries. And if only a fraction of the international aid  directed at rebuilding health systems were to be redirected towards support for citizen science, that might be a fitting memorial to those who died in the epidemic.

Precise targets for this support can be debated. One possibility is to make Ebola a central case in a revitalised problem-solving approach to the teaching of school science.

Another might be to invest in the longer term in reinforcing the local social capital formed as part of the Ebola response. Quarantine and Ebola burial tasks forces – staffed by community volunteers – might become the bottom tier of national and international systems for infectious disease monitoring and response.  This would require an imaginative programme of training and support, sustained over many decades.

Other suggestions are also welcome, and perhaps one area where a broader vision needs urgently to be developed in Africa is in science policy.  Citizen science is almost invisible in terms of recognition or support.

The experience of the Ebola epidemic requires this regrettable situation to be changed.  The message about science as the intellectual guarantor for evidence-based policy should be built from the bottom to the top as an aspect of true democratic transition.

Paul Richards is the author of the upcoming book Ebola: How a People’s Science Helped End an Epidemic (African Arguments, Zed Books). He is an adjunct professor at Njala University, Sierra Leone.