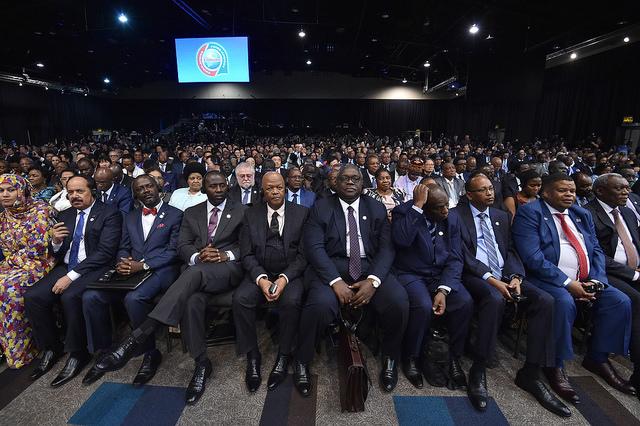 Delegates at the 2015 Forum on China-Africa Cooperation (FOCAC) summit in Johannesburg. Credit: GCIS.

Beyond the often astronomical figures thrown around when China’s engagement in Africa is described, actual data detailing the financial flows can be quite elusive.

This is the problem a new database attempts to address. Launched a couple of months ago by the China-Africa Research Initiative (CARI) at Johns Hopkins School of Advanced International Studies, the project tracks Chinese loans to African governments and state-owned enterprises (SOEs).

Started in 2007 and compiled by a team of 27, the database details a total of $86.9 billion of Chinese loans from 2000 to 2014. Unlike with some similar databases, CARI’s researchers carefully verified these loans on the ground where possible, directly communicated with relevant stakeholders and cross-checked the data in multiple languages.

Here are five initial lessons that emerge from the endeavour. (Note that the database itself is still being uploaded, so these findings are based on information from the project launch and CARI’s latest policy brief from the data.)

Media perceptions of Africa-China relations tend to emphasise supposedly enormous sums of money going from China to Africa – take for instance reports that $1 trillion in Chinese financing was destined for Africa by 2025 – but the reality appears far more modest.

According to the database, China loaned $86.9 billion to African governments and SOEs from 2000 to 2014. That’s still a massive amount, of course, but not even one-tenth of $1 trillion.

The CARI research also suggests that China on average gives out around $6.2 billion in loans a year. Again this is a significant sum, but it’s worth bearing in mind that the PEPFAR, the US programme to combat HIV/AIDS, has been funded to the tune of over $6.5 billion every year since 2009.

Although the average value of Chinese loans to Africa from 2000-14 may be just $6.2 billion/year, this number has been growing in recent years.

In 2008, China loaned around $7 billion to Africa. This fell to around $6 billion in 2009 and 2010 amidst the global financial crisis. But since then, the number has risen quickly to $17 billion in 2013. Whether this striking trend continues as China’s economy slows down remains to be seen.

3) China’s not just into resources

While China is sometimes portrayed as only being interested in Africa’s natural riches, the data paints a more complex picture. 28% of Chinese financing goes to transport; 20% to energy; and 8% communication.

Transport, energy, and communications are all forms of infrastructure that could partly be tied up with the extraction and transportation of resources of course, but there is much more Africa can offer beyond commodities that interests Beijing. China is involved in African oil, but support in the United Nations, markets for Chinese goods, diplomatic backing, and returns on investments are all hugely valuable to China too.

It is also worth remembering that when it comes to resources, China is far from the only country in the world with an appetite for what lies below Africa’s surface.

4) Beijing’s not bankrolling governments, even its close friends

China is fond of using phrases such as “all-weather friend” and “south-south cooperation”, but when it comes to parting with its money, sloganeering only goes so far. Beijing is happy to loan money to countries so long as there is a fair return on investment, but it does not splash its cash just to please its friends.

For example, despite Nigeria’s economic woes, China did not simply throw cash at President Buhari when he visited, and China does not have credit lying around waiting for projects despite what Nigeria’s Foreign Minister Geoffrey Onyeama might think.

CARI’s database serves as a reminder that China does not function as an ATM for African governments, and that these loans must be repaid. Furthermore, friendship with China does not guarantee a huge line of credit.

5) Loans are not the same as development finance or aid

When China’s engagement in Africa is talked about in the international media, “aid”, “loans”, “investment”, and “development finance” are often mixed up or used interchangeably. That means that whenever China offers any money to an African country, it is typically interpreted as a combination of aid and development assistance. But as Deborah Brautigam has explained, China and the OECD’s definition of overseas development assistance diverge in crucial ways.

The CARI database avoids these conceptual confusions by just focusing on loans without trying to define these as either aid or not. It tracks both concessional and commercial lines of credit extended by government, policy, and commercial banks and their corresponding suppliers/contractors. The project shows that using clearly defined categories such as loans can be a much more meaningful and unambiguous approach to understanding the impacts of Chinese money in African countries than many previous methods.

Lina Benabdallah is a Ph.D. candidate in the department of Political Science and Center for African studies at the University of Florida. Her research looks into the dynamics of vocational training and power diffusion in China-Africa relations.

Yiting Wang works to greening China’s overseas investment and trade policies and practices at WWF China. She has conducted field research and published on rural energy transition and carbon finance in East Africa and India.