Despite President Kiir and Vice-President Machar’s call for calm, hundreds have been killed and thousands displaced in Juba over the past few days. 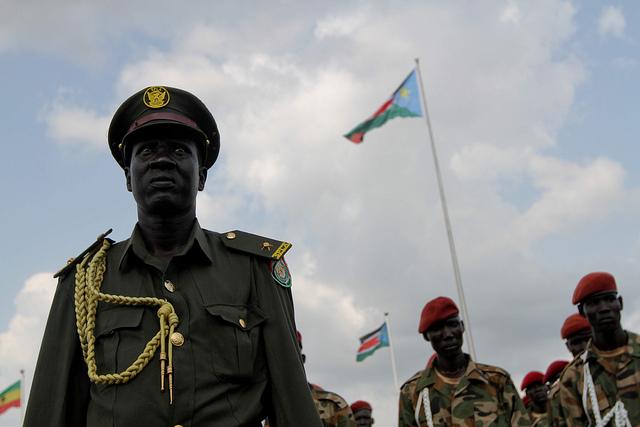 As heavy fighting has erupted in the capital Juba over the past few days, leading to hundreds of deaths and the suggestion that South Sudan is “back to war”, the question on everyone’s lips has been: who is behind the violence?

This question is all the more curious given that President Salva Kiir and First Vice-President Riek Machar − the leaders of the main rival factions in the recent civil war − were together for a press conference when one of the episodes of gunfire occurred and both seemed incapable of explaining what was happening.

One figure who was notably not there, however, was the ruling SPLA’s Chief of General Staff and former governor of Northern Bahr El Ghazal, Paul Malong − a figure that many see as the true power behind the Salva Kiir’s presidential throne.

I have written about Paul Malong and Salva Kiir’s relationship in other publications, and I have come to the unsurprising conclusion, as many South Sudanese have, that Malong is the one that holds the real power.

Malong established his authority over Northern Bahr El Ghazal and the SPLA during the civil war that spanned from 1983 to 2005. In this period, Malong dominated the local war economy and used its proceeds to cement strategic allegiances. He did this through the practice of large-scale polygamy and by godfathering his supporters’ marriages.

One of those supporters was Salva Kiir, whom Malong provided financial support after Kiir fell out with then SPLA leader John Garang in 2004. One bit of anecdotal evidence that points to the supremacy Malong developed over Kiir is that he recently offered to pay for the bride wealth for Kiir’ new wife, a role traditionally taken up by a groom’s father and his close and extended kin.

In 2005, after Garang’s death, Kiir took over as Vice-President of Sudan. And in 2008, Malong was appointed state governor of his home area of Northern Bahr El Ghazal.

In the following few years, as episodes of fighting with Sudanese forces continued, Malong managed to convince Kiir of the need to create a militia that would be loyal to them both. He took advantage of the economic disarray in his home region and began recruiting and training men into this new fighting force. Some members originated from Kiir’s home state of Warrap, but the majority were from Malong’s Northern Bahr El Ghazal. Malong was trying to position himself as the first leader from Northern Bahr El Ghazal with national stature.

The militia went by the name of Mathiang Anyoor (meaning ‘brown caterpillar’ in Dinka), but was also known as Dot ku Beny or Gel-Beny (meaning ‘rescue the President’). It was financed with the help of Ambrose Riing Thiik, the chairman of the Jieng (Dinka) Council of Elders (JCE).

In December 2013, war broke out in now-independent South Sudan. It began as a political battle between President Kiir, an ethnic Dinka, and Vice-President Machar, an ethnic Nuer, but much of the violence soon became codified along these ethnic lines, despite the fact that military alliances did not always follow strict lines.

As the fighting broke out, Malong, with the help of the Mathiang Anyoor, organised the massacre of thousands of ethnic Nuer in Juba. Soon after, he was soon promoted to Chief of General Staff of the SPLA, and he came to dominate the entire SPLA system of corruption. He invested embezzled money in various companies and used the resources strategically to sustain military allegiances, both within and outside the SPLA.

Since then, Malong has continued to recruit young men in what has become known as the “new” Mathiang Anyoor. And both “new” and “old” Mathiang Anyoor have been used to reinforce the SPLA in Upper Nile, Unity and Jonglei states.

But Malong’s influence goes even further. The Dinka commando units that have wrought havoc on Western and Central Equatorians since October 2015 − despite the signing of a peace agreement between Kiir and Machar in August 2015 − also reportedly answer to Malong. Many claim that Malong personally ordered helicopter gunships into Western Equatoria, and it is understood that the power he commands has led to rifts with Minister of Defence, Kuol Manyang.

Meanwhile, it was also reportedly Malong who made the decision to move Thayip Gatluak Tai Tai, one of the Bul Nuer militia’s ruthless commanders, to Wau in December 2015. Tai Tai had recently overseen a scorched earth strategy in Unity state whereby at least 600,000 civilians were uprooted, and after he was relocated, Wau became the site of extreme violence and the displacement of a further 120,000 civilians.

Over the past few days, violence has also reached Eastern Equatoria, which means that since the signing of the peace agreement in August 2015, three more states have been engulfed in the war.

In contrast to Malong, the influence of South Sudan’s official main leaders appears to be weak.

The recent fighting in Juba and Kiir’s apparent ignorance of what was happening reveals his lack of control over the SPLA. And it is increasingly clear that the president has lost a great deal of credibility and power amidst rumours of alcoholism and health issues.

If Kiir is a lame duck, the same might be said − albeit to a lesser extent − of Riek Machar. The first vice-president never seemed to control his troops and never had as much military gravitas as his peers in the so-called SPLM-In-Opposition (IO). Furthermore, he has made the grave mistake of dismissing IO’s most experienced generals in the past year.

With fighting returning to South Sudan despite an internationally-brokered peace agreement less than a year ago, the international community must also take some responsibility.

For instance, why did Juba’s demilitarisation take the form of a 25km radius around the city, essentially allowing the SPLA to encircle the capital while blocking possible escape routes for IO? And why was a stronger stance not taken regarding the fact that SPLA soldiers had clearly removed their uniforms but remained inside Juba and that the National Security body had grown exponentially over the past few months?

Indeed, the recent violence in Juba has shown how easy it is for the SPLA to breach security arrangements. And the heavy fighting on 10 July suggests that the situation might be even worse than when civil war began in December 2013. Fighting has engulfed different parts of the city such as Jebel Kujur/Rock City, Tongping, and Gudele. RPGs have been fired. Civilian houses have been shelled. Government helicopter gunships circle Juba’s skies. And UN premises have been hit.

The Juba bridge is also now closed off and Machar’s IO troops will not back down since they know there is no way out, especially with Malong’s commando units able to attack them easily from their bases in Central Equatoria. IO and SPLA forces are fighting right outside UN premises and reports are emerging that Nuer generals, who had remained allied to the SPLA but are now being targeted by SPLA soldiers, are asking for shelter inside the UN compound. Meanwhile, UN peacekeepers are also trying to defend their bases.

Will these two groups end up fighting side-by-side to defend a Protection of Civilians site that is overwhelmingly shielding Nuer civilians? If so, it would be rather uncharacteristic of the UN Mission in South Sudan (UNMISS), which has repeatedly failed to fulfil its mandate of protecting civilians, most shockingly in Unity state, Western Equatoria, and more recently in Wau. In February 2016 meanwhile, UN peacekeepers simply looked on as SPLA troops attacked the Malakal Protection of Civilians compound and burnt down half the site. That episode suggests that the SPLA may not feel compelled to stop at the UNMISS gates in Juba, where over 30,000 civilians are sheltering, and could easily overrun it.

Whoever wins Juba will inflict reprisals on civilians, and reports are emerging that both sides have already started doing so. Hundreds have reportedly been killed and if things continue, the death toll this time around might be even higher than in December 2013. Again, the question is: who will protect the civilians in Juba?

Many believe that Malong is the one behind the last few days’ events and point to the fact that on 8 July, SPLA troops around J1, the presidential palace, were reinforced from both the area surrounding Juba and from Luri, a cattle camp where Mathiang Anyoor recruits stayed before the 2013 Juba massacre.

Malong did make a statement on 9 July saying the situation in Juba was under control, but this was done through an intermediary and it is not clear where the man himself is. Some suspect he is in Uganda, others in Yei, and yet others say he is in Juba itself. At any rate, it is difficult to imagine the SPLA could have decimated Machar’s bodyguards on 8 July without the top orders coming from its Chief of General Staff. Kiir has called for an inquiry into the past two days’ violence, but if previous investigations are anything to go by, the perpetrators are likely to get away.

There are rumours that Malong intends to wreak havoc and maybe even take control of Juba. He may also split from Kiir, but either way he will retain control over his Dinka militias, who are spread all over the Equatorias, as well as over some of the Bul Nuer fighters, who are based in Unity and have close ties with Khartoum. Malong will also continue cultivating his popularity with Dinka communities who do not want to relinquish their desire for their own state, especially after Kiir opened Pandora’s box with his unilateral decree in October 2015 to replace South Sudan’s ten states with 28.

If Malong does intend to take Juba but fails to do so in the coming days, he may open up a new front, most likely from Northern Bahr El Ghazal. If such a war were to begin, Kiir might break with Malong and be forced to mend fences with Machar’s IO as well as with the Shilluk, Fertit, Balanda, Zande, Moru and other victimised ethnic groups. However, one cannot rule out the possibility that Kiir permits to Malong’s control of the SPLA but then sacrifices him if he has to yield to international pressure.

Another factor to keep an eye on is the role of Uganda, which intervened in support of the SPLA in 2013. There are suggestions that the so-called rebel White Army in Jonglei intends to march down on Juba to protect the Nuer and reinforce IO troops, but if Uganda’s air force becomes involved again and drops bombs on them before they reach Juba, the IO might be massacred. Most importantly, the Nuer who survived the 2013 Juba killings, might very well be too.

Much remains uncertain, but the future of South Sudan looks grim, and it is not just Juba. Other state capitals such as Malakal in Upper Nile and Bentiu in Unity state have seen troops movements and are incredibly tense.

Just five years after independence, and less than one year after a peace agreement was signed, a phase of a third South Sudanese civil war seems to have begun.

Clémence Pinaud is an Assistant Professor at Indiana University’s Department of International Studies. Her research focuses on the SPLA’s military history, predation strategies and marital practices.