Ethiopia’s unprecedented nationwide Oromo protests: who, what, why?

There are reports of dozens of deaths and thousands of arrests as protesters took to the streets today in unprecedented numbers and with unprecedented demands. 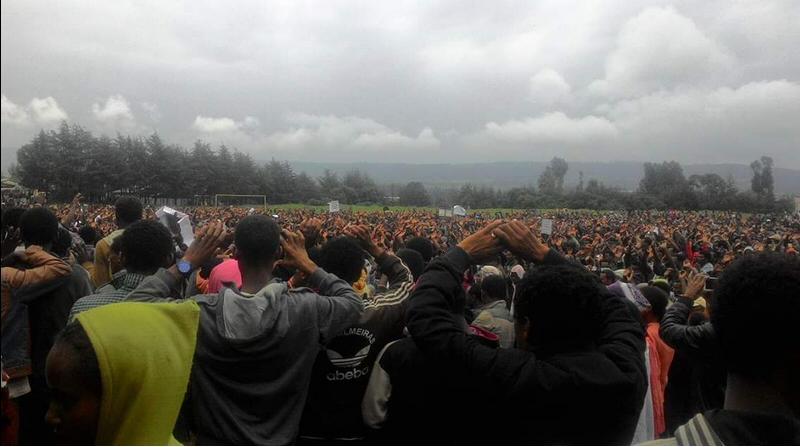 Large numbers gather in Holota as part of the Oromo protests. Credit: abenezer_a.

Ethiopia’s largest ethnic group, the Oromo, have staged nationwide rallies today to protest their continued marginalisation and persecution by the government. These are a culmination of ongoing protests by the Oromo people since November 2015 and mark by far the most significant political development in the country since the death of the country’s long-time authoritarian leader, Meles Zenawi, in 2012.

At least hundreds of thousands of protestors reportedly took to the streets in more than 200 towns and cities across Oromia, Ethiopia’s largest regional state, to demonstrate against widespread and systematic persecution. According to local media reports, over 50 individuals have been killed and thousands arrested as police and security forces opened fire on peaceful protestors. These details are likely to change as more information comes in, though the government has severely restricted the Internet and social media making communication difficult.

Protesters remain defiant despite facing military force that has been killing them with impunity.#OromoProtests pic.twitter.com/gWsXqCm3V3

What are now widely referred to as the #Oromoprotests began in November 2015 when the government introduced the Addis Ababa City Integrated Master Plan, effectively expanding the territorial limits of capital Addis Ababa into neighboring Oromo towns and villages. Oromo political leaders and activists argued that the plan, as designed, would displace millions of Oromo farmers from their ancestral lands and would threaten to eventually cleanse Oromo culture and identity from the area.

The protests were triggered by the announcement of the Master Plan and menacing land-grab policies that have already displaced more than 150, 000 Oromo farmers from the area, but they were also manifestations of a much deeper crisis of massive ethnic-based inequalities and discontentment that have been boiling underground, waiting to erupt.

Since the protests have begun, the government has arrested and jailed many of its vital and outspoken activists and organisers. A recent report by the Human Rights Watch puts the death toll from the first seven months of the protest at over 400 while the figure tallied by activists is significantly higher.

The Oromo are the largest ethnic group both in Ethiopia and East Africa, consisting of more than a third of Ethiopia’s 100 million people. However, the group has been marginalised and discriminated against by subsequent Ethiopian governments. Oromo culture and identity have been stigmatised and pushed into the periphery of country’s national life, while Oromo history has been filtered out of public memory.

Since assuming state power in 1991, the Tigray Peoples Liberation Front (TPLF) has sought to exploit historic disagreements between the Oromos and Amharas, the second largest ethnic group, to sustain the hegemony of ethnic Tigrayan elites. The TPLF framed longstanding Oromo demands for equality and justice as the greatest threat to Ethiopia’s unity and regional stability, and it used historic antagonisms between Oromo and Amhara as a political instrument to legitimise, justify, and consolidate its political and economic hegemony. The “Oromo question” became the quintessential Ethiopian problem.

Within this frame, Oromos are presented as narrow-minded, extremist, and exclusionary, while the Amharas are presented as chauvinist and violent. By producing crisis between the two groups, the current TPLF-led system presented itself both locally and internationally as the only moderate centrist force that can secure Ethiopia’s sovereignty and territorial integrity from the secessionist threat of the Oromos and the perceived far-right extremism of the Amharas.

The Oromo question and the War on Terror

In the decade since 9/11, Ethiopia refashioned itself as an anchor of stability in an increasingly restless region and began to build a reputation as a regional policing and intelligence powerhouse. As part of this West-facing strategy, it announced its 2006 invasion of Somalia as a war against terrorism, conning the US into sponsoring its proxy war with Eritrea. As the crisis in Somalia deepened, Ethiopia cemented its reputation further, emerging as America’s most reliable partner in the Horn of Africa.

This is not a partnership based on shared values of freedom, liberty, and commitment to democracy, but one based purely on security considerations. Ethiopia served as America’s local ally, and America, in turn, provided enormous financial, technical and diplomatic support. This brought in much-needed resources for the government to build the political and security infrastructure that has as its main aim the policing, control, and surveillance of internal dissent and opposition.

As the US began to define its foreign and human rights policy through the lens of fighting terror − entering a period of post-truth and post-moral politics in which sacrificing people in distant places in return for security became fair game − this emerged as the paradigmatic threat upon which the West’s fears and anxieties were projected. This made its ally Ethiopia completely impervious to criticism, even as the government used its grotesque anti-terrorism law to crush dissent, decimate the opposition, muzzle the media, and shrink civic space to extinction – all the while holding periodic elections.

Ethnic domination forms the hidden underside of the terrorism-politics nexus in the country. And its anti-terrorism law has provided the government with the most powerful political device to criminalise, police, and prosecute independent expressions and articulations of the Oromo question. Through the magic of this law, even the most basic of demands for human rights or expressions of opposition to government policy can be twisted into an existential threat.

Ethiopia’s persistent turn to its anti-terrorism law to purge critical opposition, activists, journalists, and community leaders is an unqualified disgrace to Ethiopia and its partners on the Global War on Terror.

The #Oromoprotests are a clear response to these and other forms of historic discrimination, and today’s nationwide protests mark a clear break from previous forms of protests in terms of its coordination and mobilisation. In a letter addressed to the government, protestors expressed their rejection of “the regime” and specifically asked the government to stop the violence against the Oromo, to free Oromo and other political prisoners, and to end military rule in Oromia and allow genuine self-rule, among others.

The government’s violent response to peaceful demands has led protestors to demand more radical and systemic change. The #Oromoprotests are no longer a single-issue movement. This is unchartered territory for the country and how the government reacts could go a long way to determining its fate. But today’s protest makes it clear that there can be no more business as usual for Ethiopia’s ruling elites.

Awol Allo is a Fellow in Human Rights at the Centre for the Study of Human Rights, London School of Economics.