From prosecuting Jammeh, to lifting the economy, to working out the relationship with Senegal, President Adama Barrow has a lot to think about. 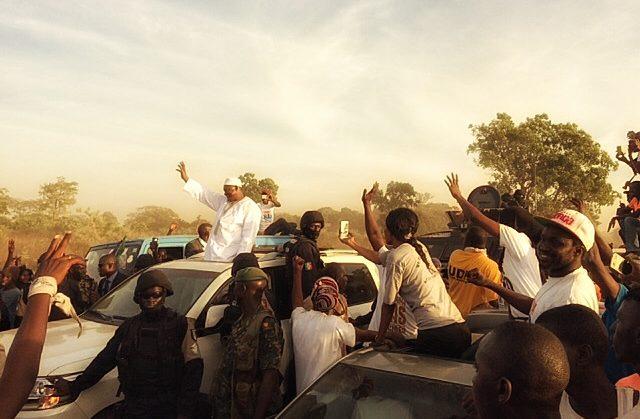 On 26 January, the Gambia’s new president Adama Barrow, returned to the country amidst widespread celebrations.

It had taken a long and tense process involving mediation from several regional presidents and a brief military intervention to convince his predecessor Yahya Jammeh to step down. But after 23 years in office and nearly two months since he lost the December elections, the former president finally boarded a plane for Equatorial Guinea.

There is much to analyse in all that led to this point. For example, why did Jammeh change his mind about accepting the election results in December? Was the ECOWAS intervention strictly legal? What can we learn from the success of the opposition and activists in the diaspora in bringing about change?

But for the moment, it is perhaps more pressing to look ahead to the big questions that the Gambia’s first new government since 1994 will be facing as it takes form.

1) Will Jammeh and his allies be prosecuted?

Once a cabinet is formed, the first order of business for the new government will be to figure out how much to dismantle the Jammeh order and what, if any, transitional justice measures will be adopted.

This also depends on what happens in the next few weeks. There are scattered reports of violence (warning: graphic photo) between Jolas, the minority ethnic group to which Jammeh belongs, and other ethnic groups. And if this goes beyond isolated incidents, the need for a transitional justice process is arguably heightened.

As of yet, the exact terms of the agreement by which Jammeh stepped down are also not known. This uncertainty has been compounded by conflicting reports on social media, fake Twitter accounts of the new president, and what appears to have been an earlier, rejected, draft of the agreement being posted on an African Union website.

Initial reports, however, suggest that the deal involves some guarantees that Jammeh will be able to keep his wealth and return to the Gambia after a period of time. It does not seem to involve immunity other than that which is already provided for former presidents in the Gambian constitution. Section 69(3) of the constitution states that there can be no civil action against a former president “in respect of any act done in his or her official capacity as President” and that there can be no criminal case against a former president unless the National Assembly has passed a motion with 2/3 support to this effect.

This is far from blanket immunity. A civil suit could be brought, for example, if the acts under consideration are not deemed to have been part of Jammeh’s official capacity as president.

For his part, President Barrow has signalled support for a Truth and Reconciliation Commission (TRC), but it is currently unclear what this would entail and if it would be paired with an amnesty process as was the case in South Africa. The New York Times reported that Barrow said that “he would wait for the commission’s recommendations before taking action,” suggesting something more along the lines of a commission of inquiry. It is also unclear what the jurisdiction would be – would it go as far back as 1994, the year Jammeh and his co-putschists seized power?

On an international level, there has been some discussion in the diaspora of an International Criminal Court (ICC) investigation, but the Court has not made any statements to that effect and it is unclear if Jammeh’s abuses, horrific as they were, would fall under its jurisdiction.

It is also possible that we will see some situation along the lines of the Hissene Habré, the ex-dictator of Chad who faced trial in Senegal. Finally, we cannot discount the possibility that some countries will exercise the principle of universal jurisdiction and bring charges against Jammeh or his associates. Indeed, on 26 January, news was circulating that Switzerland had done just that against Ousman Sonko, Jammeh’s notorious ex-Minister of the Interior.

2) How much political and legal reform will be taken?

Halifa Sallah, the coalition’s spokesperson, has signalled that there will be legal reforms prior to the next election. It is unclear what these reforms will entail, but it is likely that the rules governing the registration of parties will be made less onerous. It is also possible that the practice of having nominated National Assembly members – currently, the president appoints, or nominates, 5 of the 53 members – might end.

It is unclear if more sweeping changes will be carried out. There has, for example, been no extensive discussion of a new constitution. But it is reasonable to expect that several laws from the Jammeh era that sought to curtail the opposition will be repealed or amended. The 2013 amendment mandating a 15-year prison sentence for spreading false news or incitement of dissatisfaction, for instance, garnered widespread criticism. Relatedly, adoption of a robust Freedom of Information Act also appears to be a priority.

Whether Jammeh’s party, APRC, will continue to be a viable political force also remains to be seen. As of yet, there has been no significant discussion of banning it or prohibiting its senior members from entering politics. But it is difficult to see it remaining as powerful without Jammeh as its patron. It is likely that at least some APRC members will defect to other parties such as Barrow’s UDP or Sallah’s PDOIS, while others may simply retire from politics.

More generally, it is worth paying attention to whether the coalition that won the election will remain harmonious now it is no longer the opposition. What appears to be the inner circle around President Barrow is drawn from multiple parties, and it will be interesting to see if some are sidelined or return to the opposition.

3) Will the security services be overhauled?

The loyalty of the military was an open question until the very end of the Jammeh era, as well illustrated by the ever-shifting attitudes of Chief of Defence Forces Ousman Badjie. Even after Jammeh left the country, there was a tense standoff between Gambian soldiers and ECOWAS soldiers at the State House in Banjul. In response to this uncertainty, it appears ECOWAS forces will stay in the Gambia for some time, six months being the most frequently discussed period.

It is also safe to assume there will be an attempt to refashion the security services, including possibly disbanding those services most implicated with Jammeh-era human rights abuses. The National Intelligence Agency is high on this list as it was an invention whose sole purpose appears to have been oppression. It is also possible there will be attempts to lay off members of the security services that are suspected of having lingering loyalties to Jammeh.

Though nothing has been said to this effect, the Barrow government is likely to reassess the nature, scope and size of the small Gambian Armed Forces. It is unclear if the same will be true of the Gambian Police Force (GPF). While the GPF, most notably its Police Intervention Unit, has been accused of human rights abuses in the past, its problems are more along the lines of everyday corruption, lack of resources, and poor knowledge of regulations.

[Gambia: Why the army may be the key to getting Jammeh to step down]

4) How can the economy get back on track?

Jumpstarting a stagnant economy will be one of the priorities for the new government, a priority made all the more urgent by reports that Jammeh essentially bled the country dry before going into exile. These reports were subsequently denied, but even discounting this possibility of theft, the Gambia’s economy is in dire straits with no significant manufacturing or resources and official debt at over 100% of GDP.

The Gambia is reliant on international tourism, primarily from the UK, Netherlands, Germany, and Sweden. This provides close to 20% of its GDP and is a major source of foreign currency. During the crisis, tourism nosedived and tourists were evacuated. Tourism needs to re-start and increase in order for the already weak Gambian economy not to be damaged further.

In addition, due to the Jammeh government’s human rights abuses, the European Union cut development aid and the US government removed the Gambia from the trade deal AGOA (the benefits of which to the Gambia were unclear and future of which is uncertain under President Trump anyway). Presumably, the EU will resume of its aid to the Gambia, though the future of aid to Africa in general appears uncertain in an age of Brexit.

In the medium to long-term, it is hoped that the new government will make changes to attract economic growth and investment. A less erratic foreign policy would be part of this equation, as would greater transparency and strengthened commitment to the rule of law.

It also needs to be noted that Jammeh used his power to undercut competing business interests or support his allies’ economic goals. There are plenty of stories of the Jammeh government confiscating land for economic development only for this to profit himself and his allies.

A major backdrop to this is that the Gambia is one of the highest per capita sources of migrants heading to Europe. Several opposition figures, including Barrow, made stopping migration a central theme in their campaigns. Barrow has said that he wants to “overhaul” the economic system and create jobs to prevent further out migration, but the details are fuzzy.

5) How close should Senegal be?

By the time Jammeh’s reign was over, he was pretty isolated internationally. The incoming administration has already signalled that they will reverse several controversial decisions. One can thus expect the Gambia to return to the International Criminal Court and the Commonwealth. Presumably, the relations with European Union and the United States will thaw as well.

One relationship worth paying extra attention to is that with Senegal. Jammeh’s relationship with Gambia’s only neighbour was prickly, to put it mildly. He was long rumoured to be giving support to the rebels in Senegal’s southern Casamance region and engaged in an on-again-off-again trade war with Senegal. For example, in 2016, the Jammeh government unilaterally increased the fee payable by Senegalese truckers for crossing the Gambia by a factor of 100.

Of course, if it weren’t for Senegalese troops, it is unlikely Barrow would be in Banjul in the first place, and it seems the new government will be reliant on Senegal for its security for a while.

Anecdotal evidence suggests that at least some Senegalese think their country should take the opportunity to push for a revival of the Senegambian Confederation, which was established in the 1980s after another political crisis, but the incoming government of the Gambia has not signalled anything that would suggest that such a revival is on the agenda.

A longer version of this article was originally published on the Mats Utas blog.

Niklas Hultin is an assistant professor in the Global Affairs Program at George Mason University. He has done extensive research in the Gambia. Follow him on on Twitter at @nhultin.