Legal invisibility was the best thing to happen to me

I became an undocumented migrant at age six and it changed my life. 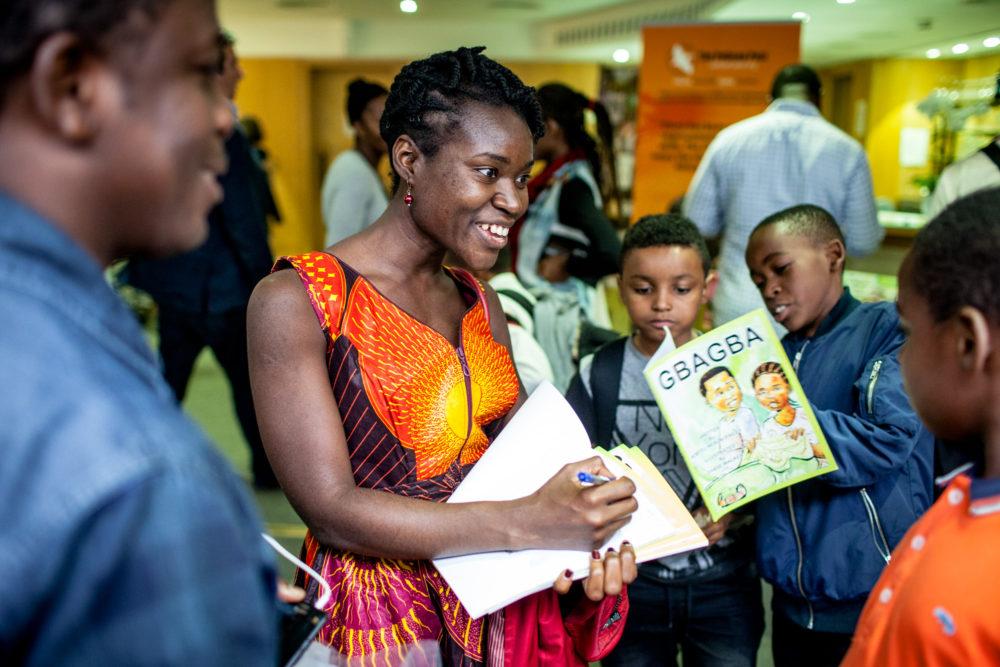 For the millions of undocumented migrants across the globe, life unfolds above ground, but below the radar.

When I was six years old, I plunged into a vortex of legal invisibility and remained trapped in its grip for nearly 15 years.

Born in Monrovia, Liberia’s capital, I travelled to the United States in 1988 on a visitor visa to join my mother and father, overstayed, and lived in undocumented limbo until I was 20.

This twist of fate may have been the best thing to happen to me.

In Toni Morrison’s haunting novel Beloved, the protagonist, Sethe, kills her two-year-old daughter rather than surrender her to a lifetime of bondage in American chattel slavery. Call it intuition, but by flouting US immigration laws, my parents eventually shielded me from 14 years of intermittent armed conflict.

As we celebrated my second Christmas Eve in the heart of Washington DC, a militia of counter-insurgents invaded Liberia from Côte d’Ivoire in 1989, spiralling the country into an abyss of death and destruction.

Had it not been for the brutal inconvenience of war – or the inconvenient brutality – I probably would have spent long sultry holidays in my country of birth. Sitting under a plum tree reading. Playing Knockfoot, Hopscotch and I Die until dusk with a bevy of cousins. Learning to speak Bassa and Kru fluently, with perfect intonation.

I was relatively oblivious to my peculiar status in the US because I came of age in the 1990s U Street corridor of DC, when chocolate city was actually chocolate.

Now a gentrified mass of whiteness, Adams Morgan back then was a bustling abode for first and second-generation brown and black immigrants from Central America, the Caribbean, West and East Africa.

While some of us had legitimate American identity documents, others did not.

Within my fortified elementary school compound, our legal statuses – or lack thereof – remained refreshingly divorced from the messy politics of immigration. Ours was a world filled with cultural dress days, Amharic, Spanish, Chinese and sign language classes, tastes of the town, excursions to stage plays and movies like Dreamgirls and Sarafina! Back then, the sharp lines between legality and illegality rarely factored into my pre-pubescent consciousness.

Yet, while I felt affirmed in my immigrant identity, as I grew older it became increasingly obvious that I was trapped. Back then legal invisibility felt like an albatross around the neck, choking me slowly. Cutting off circulation. Stifling my potential.

It was paralysis personified.

While I was physically present (visible) in the US, I remained absent (hidden) from the entitlements that legal visibility affords. The privileges and protections that most Americans take for granted – authorisation to work, go to school or access healthcare – were unreachable.

I attended private middle and high schools because they were better quality, yes, but also because the public ones asked too many questions about my legal status.

Most undocumented migrants struggle over whether to conceal or reveal too much of themselves. Both actions involve calculated risks. Often accused of being entirely too private, guarded or elusive, I never quite understood the compulsion to overshare.

When a trip to Italy with my high school choir came up, I conjured up an excuse for why I could not go.

While classmates padded their resumes with vacation jobs or traipsed off to Europe or South America on exotic summer holidays, I stayed at home sulking.

During my senior year of high school, an offer from New York University arrived in a coveted white and purple 8 x 11 envelope, and I finally felt vindicated.

But legal invisibility meant ineligibility for federal aid so I had to decline.

I remember walking home dejected, nostrils flaring, heaving with an indescribable pain in my chest. “Mom, I’m stuck”, I said, uncontrollable tears streaming down my face because yet another opportunity had eluded me.

What I discovered awaits the undocumented is not “heaven on earth” but rather an endless checklist of unfulfilled desires.

But there’s another realm of undocumented life that does not get captured in the mainstream. Legal invisibility renders some of us visible in other, more profound ways.

In Liberian cosmology, if your navel string (umbilical cord) is buried in a particular place, you maintain a metaphysical connection to it. Not having legal status in the US all those years made me fiercely Liberian, unabashedly African.

My parents and I created a universe of yearnings that could be met, filled with regular forays into Liberiandom. In our parallel world there were no visa restrictions, surveillance systems or rabid immigration officials.

There was only the possibility of being fully human, of thriving rather than simply surviving.

As a child I attended Liberian community association meetings with my suspenders-clad dad, where the pulse of politics was palpable.

My mother, younger sister Ella and I relished our summer trips to Staten Island, New York, travelling in a ferry while saluting the Statue of Liberty.

The projects of Park Hill – otherwise known as “little Liberia” – were like Monrovia suburbs transplanted in the US. We’d lounge on concrete sidewalks until the wee hours of the morning, roasting succulent meat skewers with a concoction of hot pepper sauce served on a soft bed of thinly chopped onions.

In young adulthood, I joined the Liberian Studies Association, learned how to cook Liberian cuisine – well, sort of – and perfected the lilting Liberian English that rolls off the tongue like an unstoppable locomotive.

I studied Africa intently, dissecting it under a microscope. I was fascinated as much by the Olduvai Gorge in Tanzania, the Pyramids of Giza in Egypt, the ancient manuscripts in Mali, Mosi-oa-Tunya in Zimbabwe, as I was by our pre-colonial, colonial and post-colonial cleavages.

Intensely bookish, I became hypersensitive about the world’s inequities, and obsessive over how my birthday – 12 April – changed the trajectory of Liberia’s history for better or worse.

As the war in Liberia raged on, extinguishing people and places in its path, my parents hosted family and friends fleeing the conflict all the while toiling to make me legally visible. My mother worked two jobs to cover exorbitant immigration fees, filled out countless forms in microscopic fine print, justifying my existence.

In 2000 when I was 18, I watched my mother raise her right hand and pledge allegiance to the so-called “free world”.

In the small room in downtown DC with official-looking, mahogany furniture, a six-foot US flag billowed in the background during the naturalisation proceedings.

As keynote speaker, the president of Howard University (where I was then a freshman undergraduate) regaled the newly minted US citizens with clichés about what a wonderful place America was.

However, my mother naturalised on that eventful day, not because of some deep, abiding love for America, but because she needed US citizenship to regularise my status. Her revocation of Liberian citizenship represented, for me, the pinnacle of parental sacrifice.

When I finally got a US residency card in 2002 – aged 20 – I genuflected in gratitude to my mother, yanked off the albatross and traded it in for something more wholesome: the freedom of movement that comes with legal visibility.

My childhood and adolescent experiences made me immobile, yet an inner restlessness has compelled me to keep it moving, literally, in adulthood.

In my 20s I lived in six countries covering three continents at different intervals, a kind of “instability” that my father chides even to this day.

During my third year at Howard, I studied abroad at the universities of Ghana and Cape Town for four and six months, respectively.

After undergrad, I spent a year freelance consulting and interning at the American University in Cairo, Egypt, followed by a 12-month stint as assistant editor of The Washington Informer in DC.

Europe enticed me further afield with a full scholarship to study African history and politics at Oxford. A few days after graduation, I hopped on a jumbo jet plane to my country of birth to write speeches for the first female president of Liberia – and Africa – on a one-year fellowship that transformed into four.

As I lectured part-time at two Liberian universities my love of scholarship blossomed into an obsession. So, I resigned from high-profile public service in my late 20s and relocated to London for a PhD at SOAS.

During a research trip to Haiti in 2014, I stumbled upon a store off the beaten path, pulled an astrology book from the shelf, flipped through its crisp pages for April 12 and discovered that I was destined to be a nomad in my 20s and 30s before settling into comfortable stasis in my 40s. So far, reality has eerily fulfilled this prophecy.

Rather than cowering in fear of being exposed and expelled, I now travel the world with an intense sense of purpose and defiance, trying to make what was once invisible, visible.

Undocumented migrants contribute enormously to the economies of the so-called Global North as cheap labour, yet they are spurned by those who benefit most from this informal system of exploitation. They literally clean up the shit that no one else wants to see or smell, in more ways than one.

Contrary to popular imagination, most migrants – undocumented and documented alike – are not leeches feeding off a system of finite resources reserved for non-migrants.

Like my parents, they work two, three, sometimes four jobs to get by while supporting entire households abroad. It is virtually impossible to exploit a system that does not even recognise you as human, much less visible.

Undocumented migrants have become the scapegoats of politicians as a cover up for their failures in responding to the needs of the documented.

Even the prefixes we use to describe those without legal status point to their presumed “abnormality”: extra-legal, irregular, illegal, unauthorised.

If we considered undocumented migrants not as invasive “swarms” of racialised, ethnicised “others”, but as human beings with the same fears, hopes and aspirations as the documented, more humane, evidence-based policies would surely materialise.

The past 20 years of migration research has proven that acute restrictions on movement such as border controls, fortified walls, executive bans, deportations and other severe measures actually produce more clandestine forms of migration putting migrants at risk. Criminalising migrants is clearly not the solution.

Instead, there is a need for general amnesties for the undocumented, fast-tracked regularisation programmes, family reunification schemes and free movement of persons protocols.

With 15 eventful years of legal visibility under my belt, I can’t help reflecting on the moments that have most profoundly shaped the contours of my life.

It was certainly the bittersweet days of living under the radar that moulded me into a fully minted, itinerant Liberian with an American twang.

This enhanced rather than constrained my ability to aspire.

This article was originally published on Al Jazeera English.