“What is really important to [President Aziz] is to have direct and unconditional access to the constitution to modify it as he pleases.” 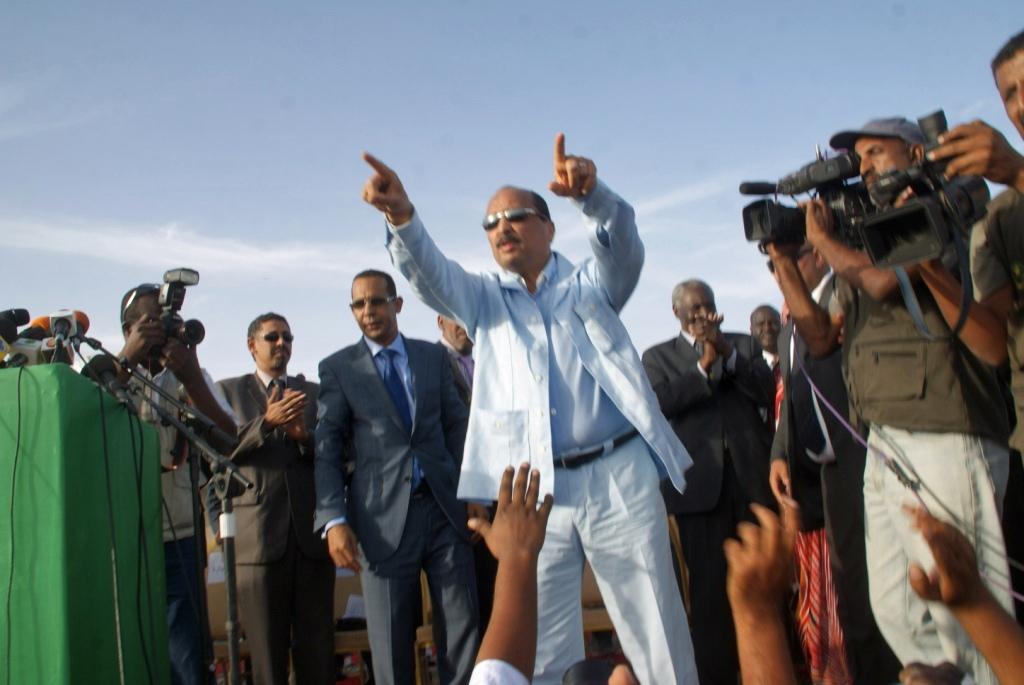 Many are concerned that President Mohamed Ould Abdel Aziz is trying to pave the way to run for a third term. Credit: Magharebia.

On 5 August, Mauritanians will vote in a constitutional referendum that could see power further centralised in the presidency. Opposition groups strongly oppose the proposed amendments, warning that they would remove crucial checks on power and pave the way for President Mohamed Ould Abdel Aziz to run for a third term in 2019.

If voted through, the constitution would be changed in a number of ways. The High Court of Justice, the Islamic High Council, and the Ombudsman of the Republic would be integrated into a single institution: the Supreme Council of the Fatwa.  The Senate would be replaced by new “regional councils”. And the flag and a few words in the national anthem would be altered.

The proposals were initially drafted last year and approved by the National Assembly. The changes then went to the Senate. Ahead of this vote, opposition parties called on the senators not to “sign their own death warrant”. When put to the vote, the lawmakers rejected the constitutional amendments.

In response, however, President Aziz cited Article 38 of the constitution which gives the president the right to, on “any matter of national importance, seize the people by referendum”.

The suggested changes to the flag and national anthem would be relatively superficial, but the other proposals have more ominous undertones.

Replacing the Senate with regional councils is likely part of the decentralisation programme pushed by the World Bank and others. Mauritania, a large and highly-centralised country, could reap some benefits from this drive. But observers raise serious concerns about the specific measures under consideration.

Raquel Ojeda-García, professor of Political Science and Administration at the University of Grenada, argues that regional councils would lack the legislative status and capacity to manage local affairs and implement policies. “If they don’t have political powers…and human, financial and material resources, it is not real decentralisation,” she says.

Moreover, Ojeda-García adds that dismantling the Senate would be “a very dangerous measure regarding democracy and representative institutions”. “Decentralisation or the reinforcement of the regionalisation process can’t be an excuse to abolish the Senate,” she says.

Indeed, abolishing the body in favour of pliant regional councils would remove a key check on the president’s power. This is similarly true of consolidating the judiciary into a single body. Closing off the range of avenues through which people can express and litigate their grievances, the less responsive the government has to be to its critics.

Days before President Aziz began campaigning for a “Yes” vote, the opposition announced it would boycott the referendum. Boycotts are a common opposition strategy in Mauritania and, in this case, the action has broad support from Islamist politicians to anti-slavery activists.

Soon after the move was announced, the High Authority for Press and Audiovisual Media (HAPA) ruled that only those campaigning “Yes” or “No” would have airtime on the television, effectively stifling the opposition’s voice.

Despite the lack of airtime on television, however, the opposition is still getting its message out. A march in the capital Nouakchott on 15 July, for example, drew thousands of anti-referendum protesters. At the demonstration, successive speakers from the National Forum for Unity and Democracy (FNDU) coalition articulated their disapproval of the referendum. They called the proposed changes “a coup against the Constitution” and accused President Aziz of “serious authoritarianism”.

As the referendum approaches, the situation has become increasingly tense in the capital. Opposition leaders have been harassed, and risk consultancies warn of the potential for “violent confrontations” between protestors and security forces. On 26 July, police used truncheons and tear gas on anti-referendum demonstrations.

Considering the suppression of the opposition and the boycott, it is highly likely that a majority of those who vote on 5 August will approve the changes to the constitution. If so, it will not be long before the Senate is abolished and three branches of judiciary are folded into one.

For many Mauritanians, however, the real anxiety around the upcoming referendum derives from the idea that this vote is just the start. They believe that after centralising his rule through the proposed amendments, President Aziz plans to make further changes.

According to Guéladio Diabira, Professor of Public Law at the University of Nouakchott, “what is really important to [President Aziz] is to have direct and unconditional access to the constitution to modify it as he pleases and without any limitations.”

One of the changes believed to be in the offing is to remove term limits to allow Aziz to run again in 2019.

Last year, the president explicitly denied any intention to run for a third term. Speaking in October, he told reporters: “This question has to come to an end. I am telling you the term limits will not be changed.”

But others in the government have been singing a different tune. At a recent campaign event, the Prime Minister declared to the President’s supporters: “You have the right to demand a third term and to demand the current president remain in charge of the country to complete the projects already underway.” Meanwhile, during a televised national debate, a senior official claimed that Aziz has not made a clear signal internally regarding a third term.

There is little doubt in the minds of many Mauritanians, however, that the president seeks to hold onto power beyond 2019. They point out that, since independence from France in 1960, Mauritania has yet to experience a democratic and peaceful transition of power.

Looking ahead, Diabira sees yet more referenda and more constitutional changes. He predicts that: “In 2019, [President Aziz] will have another referendum – if he does not have someone he can trust to replace him – in order to preserve his interests and allow him to return to power whenever he wants.”