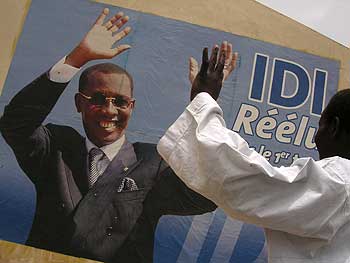 In February 2008, three rebel movements in a joint operation entered the Chadian capital, N’Djamena, and came very close to mounting a successful coup against the government of President Idriss Déby. Focusing on the three rebel leaders involved in the coup attempt, Mahamat Nouri, Timan Erdimi and Abdelwahid Aboud Mackaye, I have written a report for the Norwegian Peacebuiling Resource Centre (NOREF) describing and analysing what has happened to the main protagonists since 2008.

Rivalry over leadership of the rebel movement, particularly between Nouri, the then leader, and Erdimi, is widely believed to have been a major factor in the failure of the coup. In its immediate aftermath, all three rebel leaders continued to try to forge a variety of alliances and, with the support of the Sudanese government in Khartoum, launch further attacks on the Déby regime. In January 2009 Nouri’s power began to wane when, at the insistence of Sudan (who had lost faith in him), Erdimi was appointed leader of yet another new alliance. In May 2009, in the only serious coup attempt after February 2008, Erdimi’s forces suffered heavy losses at the hands of the Chadian army in the town of Am-Dam after they crossed the border from Sudan. Four months later, Erdimi and 12 other rebels were sentenced to death in absentia by a Chadian court for their role in the coup attempt.

The final nail in the coffin for the rebels came in January 2010 with the signing of a peace deal between President Déby and President Omar al-Bashir of Sudan, a condition of which was that Sudan should stop supporting the Chadian rebels and disarm them. Since then, many former rebels have returned to Chad, where large numbers have been granted amnesty, and Nouri and Erdimi have been forced into exile in Qatar. Aboud Mackaye remains in the Sudanese capital, Khartoum, as acting head of the remaining rebels but has little power. Some believe he is waiting for a suitably attractive offer from Déby to put an end to his opposition. However, with most rebel soldiers having defected or been expelled from Sudan, Déby has little interest in negotiating with him.

Based on interviews with (former) rebels and senior political opposition leaders in Chad and France, privileged access to US Embassy documents, and various blogs from the Chadian diaspora, I conclude that the military insurgency in Chad has lost most of its power and that there is little chance of a unified rebel movement attempting another coup. The only possible route to regime change in Chad at present would be if the presidential guard were to mutiny.

the full report ( 7 pages) can can be downloaded from :

Ketil Fred Hansen is is associate professor in development studies at Oslo University College. His research focuses on democracy and security in francophone
Africa.