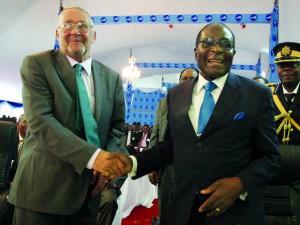 Zambia’s Vice President Guy Scot (L) congratulates Zimbabwe’s President Robert Mugabe on signing Common Market for Eastern and Southern Africa treaties (COMESA) during the 15th COMESA Summit in Lilongwe on October 14, 2011. The actual summit will look to take steps toward forming a 26-nation free trade bloc stretching from Cape Town to Cairo, by joining with the East African Community and the Southern African Development Community. The three blocs agreed to merge last year, and have given themselves three years from now to remove tariff on trade in goods. The new bloc would have a combined economy estimated at 875 billion USD (597 billion euros). AFP PHOTO / AMOS GUMULIRA