The Tuareg: between armed uprising and drought – Baz Lecocq and Nadia Belalimat 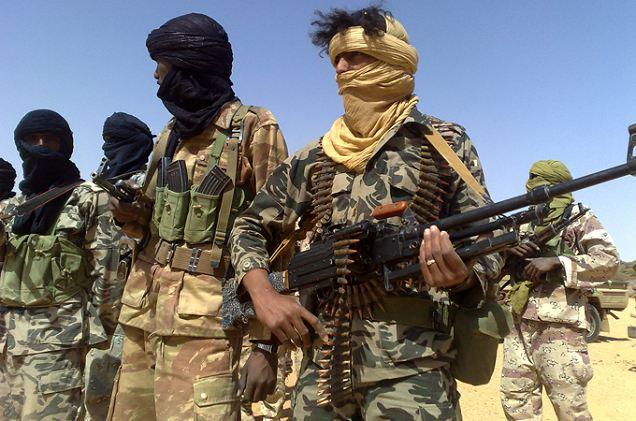 Tuareg rebels in Northern Mali - the military element of a nationalist response to the region's problems.

The recent Tuareg uprising in Mali under the banner of the MNLA has raised concerns over stability and safety in the region, with much attention focussed on the Libya and AQIM (Al Qaeda in the Islamic Maghreb) ‘connections’. The framing of the conflict in terms of international security and political (in)stability elsewhere obscures the causes, considerations and implications on a local level. Here we will try to discuss the conflict from a Tuareg perspective, estimating the impact of local, international and national concerns on the chances for peace or lasting conflict.

The Tuareg fighters are the masters of high-speed long-distance motorised guerrilla warfare, a tactic with which they have repeatedly defeated the Malian Armed Forces and which was subsequently adopted by AQIM. To regain the advantage, the U.S. employed aerial combat units against AQIM, while the Malian Army has invested in areal combat precisely to better deal with Tuareg insurgency. The possible introduction of ground-to-air missiles, brought into Mali by Tuareg fighters returning from the Libyan conflict, would mean a loss of the tactical advantage for both the U.S. and Malian armed forces. The return of Malian Tuareg fighters from Libya, and the concern over these missiles, explains the rapid militarization of northern Mali in the past months, which enhanced chances of renewed military conflict.

To properly understand the shifting dynamics of this conflict, it is necessary to understand the different positions taken by Tuareg factions in Northern Mali: the Tuareg and Arab fighters who were integrated into the Malian Armed Forces as the outcome of previous peace processes, as well as the fighters who returned from Libya in late 2011. Part of the last group has been voluntarily integrated in to the Malian army, while others have joined the MNLA. A number of high ranking Tuareg officers in the Malian army and their Tuareg rank and file however remain loyal Malian soldiers.

Regardless of its claims, the MNLA does not represent a politically united Tuareg people. While some Tuareg make use of Malian state support only for pragmatic purposes, others have always felt fully part of Mali. There are many Malian civil servants and politicians of Tuareg origin. But the recent sacking of prominent Tuareg politicians’ residences in Bamako, (mostly former government members), and their subsequent flight abroad, are further proof to most Tuareg that they are not seen as full Malian citizens.

The recent fighting in Northern Mali thus positions Tuareg forces of the MNLA against Tuareg and Arabs in the Malian Army. These positions reflect power relations internal to Northern Mali that must be taken into perspective. The current inter-community violence will complicate the conflict in ways the Malian Government will undoubtedly be able to exploit, just as it has done in the past. Since the outbreak of the latest round of conflict in 2006, the Malian government has changed its strategic alliances in the north toward a coalition of Tuareg and Arab tribes, making use of internal struggles for political dominance within Tuareg society. This will inevitably prolong the conflict and raise the death toll.

As for the presence of missiles in the region: while Tuareg rebels avoided urban combat in the past, the MNLA now targets cities in the north, in the hope that the Malian army will not deploy its attack helicopters and thus avoid civilian casualties. The fighting in Ménaka has proven this tactic partly successful, the bloody assault on Aguelhoc had disastrous effects. The consequences for MNLA support remain to be seen. The continued use of areal combat units by the Malian armed forces, with no news of these being taken down by the MNLA, sheds doubt on the actual presence of ground-to-air missiles in the area.

More important than military tactical explanations however are political ones. The MNLA, (National Movement for the Liberation of Azawad), is a nationalist movement. It is the most recent incarnation of the Tuareg wish for national independence, built on a centuries old awareness of Tuareg socio-political coherence as a people. This had first been formally expressed in demands for independence during decolonisation in the late 1950s, then again in violent rebellion in the 1960s. It was politically reformulated in the 1970s and 1980s, and reshaped into a new military uprising and political negotiation in the 1990s and 2000’s. Now it resurges in ever more clearly nationalist terms.

The media focus on AQIM and former Libyan military in the MNLA hides the far more important participation of a large group of young media savvy Tuareg, some of whom are educated in Libya or The Gulf states. These founded the National Movement of the Azawad (MNA) in late 2010, to address the various crises facing Northern Mali. The arrest of their leadership after the founding meeting in Timbuktu, the violent police repression of their demonstrations, and the lack of recognition of the movement from Bamako, has led them to connect with other elements to form the MNLA. Undoubtedly inspired by the independence of South Sudan last year, they use the language of international human rights and indigenous people’s rights to formulate the MNLA’s demands for national independence to be decided by referendum. Their participation means that Tuareg nationalist aspirations have firmly taken root in a new generation, proving the viability of the idea.

To those who believe in it, and the members of the MNLA do, national independence is the rational answer to the complex problems besetting the Tuareg. Some form of recognition of the national aspirations of the Tuareg needs to be made for peace negotiations to have a chance. Decades of intermittent fighting, renegotiations, reopening of hostilities and resultant insecurity have proved this already. However, the outcome of the proposed referendum will most likely show only minority support for independence as Northern Mali is a mosaic of cultures and populations with very different relations to the Malian state. A reformulation of the independence question to one of limited autonomy, in line with previous agreements between government and Tuareg separatists, might form the basis of a more realistic political debate.

AQIM is highly unpopular among the population of Northern Mali. Primarily it raises feelings of insecurity (if only through the presence of Malian and U.S. armed forces) and disapproval of their ideology is still widespread. AQIM has become the object of accusatory propaganda for all sides in the conflict without there being any way to know its real impact or connections in the operational theatre.

However, in the past years some Malian Tuareg and Arabs have joined AQIM. Recently, former rebel leader and official Malian diplomat Iyad ag Ghaly created the Ansar ud-Din: a salafist movement aiming at the institution of an independent and Islamic Azawad state. Ansar ud-Din attracted Tuareg previously integrated in AQIM. So far, Ansar ud-Din has been denied all support by other Tuareg political factions, including the MNLA, but there are likely to be links between AQIM and Ansar ud-Din. This movement presents a radically different vision of Tuareg nationalism and a new form of opposition to the Malian state. This will certainly complicate the internal political struggles that accompany all Tuareg rebellions so far and hamper the peace process. Moreover, while the MNLA claims the attack on Aguelhoc of January 24 as theirs, a number of eyewitness accounts indicate that the attack was coordinated and carried out mostly by Ansar ud-Din, possibly allied with former AQIM elements. Furthermore, the Mauritanian press agency ANI announced the death of two former AQIM leaders during the Aguelhoc attack. Confusion about the various actors in the conflict and their positions are enhanced by the strong media presence of the MNLA, while Ansar ud-Din, despite its presence in the field, remains silent.

Most important to this conflict, however, are the economic and ecological crises The North currently faces. The murder and kidnapping of foreigners by AQIM has resulted in the collapse of the tourist industry, and a near total retreat of international NGOs, drying up two important sources of legal income. The NGO retreat also meant a decrease in support infrastructure for relief aid serving to mitigate the effects of the drought which has affected the region since 2009. Although the famine early warning system indicates small improvements for northern Mali, there is no accurate data on the actual consequences, which might be worse than previously predicted.

In the past, the Tuareg nationalist movement gained its momentum and mass support from the famines of the 1970s and 1980s. The collapse of their pastoral way of life and mass starvation left many Tuareg with the idea that if they wanted to survive, they had to be politically independent. The current drought and shortages of food, pasture and the lack of effective national and international responses, will certainly strengthen nationalist sentiments among the population, enhancing support for the MNLA. At present the conflict has generated almost 120,000 refuges and internally displaced persons. The combined humanitarian consequences of the conflict and the drought lead us to fear the worst for a dry season that has already begun months earlier than normal, in a period of military conflict that risks degenerating into full-scale war.

Last year’s announcement by President Touré of the Special Programme for Peace, Security and Development in North Mali (PSPSDN) was met with scepticism. Most development programmes promised after the rebellion of the 1990s have either never materialized, or the funds have been allocated to, or embezzled by, a Tuareg elite or politicians elsewhere in the country. For the local economy, the sole positive side is that some of this money has been invested in international smuggling, but the trickle-down effects of these investments are small and slow to come, while they raise further international concerns about regional security. What assistance did arrive has mostly been employed in direct relief aid or programmes with high visibility in the local ‘traditional economy’ (cemented wells and the like), which prove little use in uplifting the pastoral economy when the next drought hits.

The money used in micro credits to start small shops is futile in its attempt to kick start the local economy and this is well-sensed by most inhabitants of the north who nevertheless take aid money but without much hope of lasting effects. The MNLA’s negative stance toward the president’s programme has not been helpful either. The argument that most of Mali is not very prosperous makes no sense from a Tuareg perspective. Why should they compare themselves to a country they do not feel part of? They prefer to look towards South Algeria, Libya Saudi Arabia and Qatar: prosperous desert countries. The continued failure to generate economic development musters further support for national independence. At the same time it remains questionable whether economic prosperity would make the Tuareg forget their desire for independence. However, unless the economic development of northern Mali is geared towards lasting viability, lasting peace will not be possible.

So far no peace talks have been announced, but it is of vital importance that they are brought about in the near future. These, in our opinion, should include all parties, but especially civil society in the North, while the MNA should be recognized as the political branch of the MNLA. The wounds of the inter-ethnic conflicts of the 1990s in Northern Mali are not yet healed. Manipulation of these wounds by any of the involved parties is not unlikely. This would inevitably lead to spirals of increasing violence in Northern Mali.