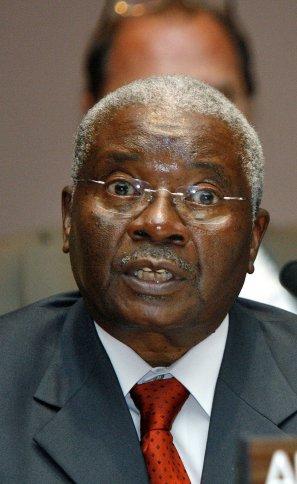 On 8th May2012 the President of Mozambique, Amando Guebuza, spoke at the latest Oppenheimer lecture in London. Mr Guebuza came to London at the invitation of the Oppenheimer group and used the visit to meet David Cameron and other British and Mozambican dignitaries.

Guebuza had two central messages; that global challenges require global solutions, and that security is essential for development.

It is ironic, that in this extended period of African economic growth (some of it double digit), achieving the millennium goals remains a real challenge. Even when/if they are reached, there will still be many who live in poverty. Conflict stops development in many of these flourishing economies. To highlight the extent of the problem, Guebuza stated that the UN spends more on security personnel in conflict areas than France spends on development.

The end of the Cold War brought a period of relative peace to Africa and it was hoped that this would lead to security in the South of the continent. The absence of two competing political ideologies and a better understanding of how to resolve political warfare, have both contributed to a decline in these state-level conflicts.

Mr Guebuza argued that now conflict comes not from state agents, but from non-state protagonists, terrorists being the most obvious example. For Guebuza, social/economic problems are the main cause of this new type of conflict.

Within Guebuza’s own country, in recent years, a constant flow of immigrants has caused social and economic unrest. Arms and drugs have permeated Mozambique’s boarders with the influx of foreign labor. No country can prevent this entirely and no country can solve these problems alone.

Mr Guebuza went on to emphasize the interdependence of nation states. Thus resolving these new types of conflict must be a collaborative process. Mozambique shares boarders with many of central Africa’s landlocked countries, offering them links to maritime trading networks and collecting essential revenue in return. However these coastlines are now under threat. They are hard to police and their protection cannot be the responsibility of a single nation state.

Somali piracy started as a non-newsworthy event but since 2010, the cost of maritime piracy has exceeded $150,000,000 and 10 incidences have now been recorded off the southern coast of West Africa. In November 2010, the highest ransom was paid to release the son of a Korean Oil trader; a staggering $9.5million. Diversion is not an option – a report by the African Development Bank suggested that it would cost $3.5billion to re-route trade vessels round the African cape. According to the UN, pirates gained $170million in 2011. The sea off the Mozambican coastline offers livelihoods for hundreds of thousands of Mozambicans and must be made safe for the country to develop.

Furthermore, discoveries of gas have recently been made off the Mozambican coast, offering huge potential revenues. Again, a lack of security down the East African coast could threaten further extraction and the benefits it would bring to Mozambique.

Mr Guebuza argued that a number of UN conventions and reports on the growing piracy problem have concluded that a larger military presence at sea is not the answer to solving the problem. Rather, greater security at the state level in Somalia will provide the stable conditions whereby piracy won’t be relied upon for Somalis to earn a living.

In the Mozambican context, Mr. Guebuza stated that the Mozambican Intelligence Agency is achieving results and its research is showing that security can’t be guaranteed unless social and economic stability is achieved. The lack of local opportunity is what leads to immigration and the illicit pursuit of wealth, as seen in Somalia. These must be resolved for security to be guaranteed.

Finally Mr. Guebuza stated that these challenges and threats cannot be faced in national isolation. Regional and national co-operation are essential for a peaceful and prosperous world.