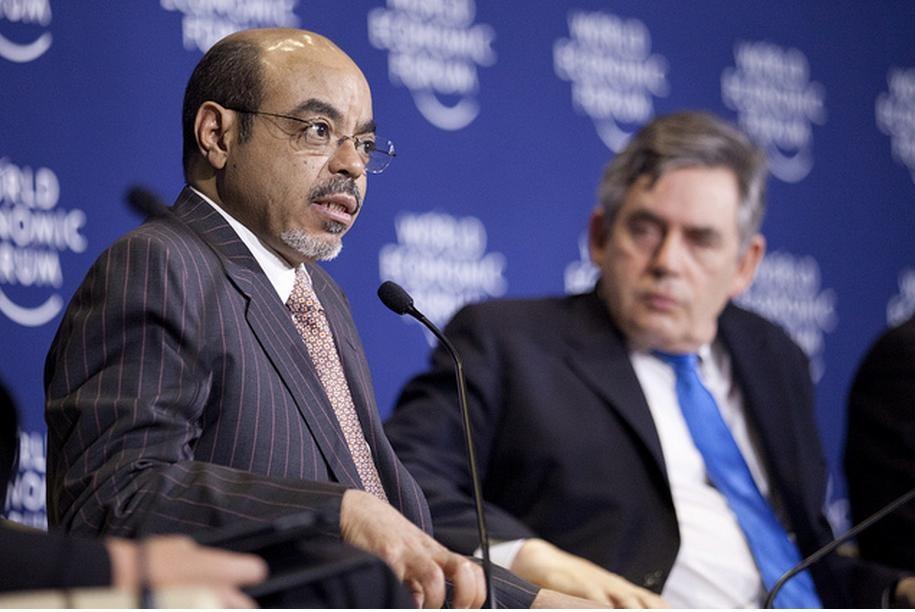 Putting the world to rights with Meles and Gordon.

The World Economic Forum is best known for its annual meeting at Davos in the Swiss Alps where, recently, focus has been on the poor state of the world economy – particularly that of Europe. So, the annual Africa version of the event (held last week in the swanky surroundings of the Sheraton, Addis Ababa) must make a welcome change, as the atmosphere was robustly positive. African economies are on the rise, none more so than Ethiopia’s which, if you believe the numbers, (and most informed sources do) grew at between 5 and 10 percent over the past half a decade.

Sitting astride this economic growth, and taking pride of place at this year’s WEF, was Ethiopian Prime Minister Meles Zenawi. In an event that boasted such political heavyweights as former British PM Gordon Brown, and private sector luminaries like the Ivorian boss of The Prudential, Tidjane Thiam, whose $600 billion worth of assets makes Ethiopia look like a minnow, I was surprised by how much Meles came out as the dominant figure.

A fiercely intelligent man, with a grasp of figures redolent of Brown (whom Meles referred to as “˜Prime Minister’ throughout) he seemed totally in his element. Perhaps it was the nature of the audience. He was never going to have to field too many tricky questions about Ethiopia’s political space, (un)free press or tight government control over telecommunications and banking in front of a room full of CEOs and fellow technocrats.

One senses that in certain crowds his statement that “there is no direct relationship between economic growth and democracy” would have got him in to trouble – important players were gnashing their teeth at this but Meles, kingpin of Western policy in the Horn of Africa, knows exactly how much he can loosen his Marxist instincts without upsetting his donors. To this end, the above was quickly followed by the rider that “democracy is a good thing in and of itself, irrespective of its impact on economic growth.” When it was asserted that Africa’s post Cold War democratisation was a reason for more recent economic success, Meles scathingly referred to this as “old stuff”.

One of the bigger topics of debate across many panels was how public and private sectors can most effectively work together for both economic growth and development. During a discussion on developing African infrastructure, Meles asserted that government would have to lead in the construction of roads, railways, power systems etc because private sector investment in these areas was “miniscule” – the risks are simply too high. Gordon Brown, ever the flexible social democrat, championed the public-private partnership as a means to raise capital for the kind of infrastructure projects that the private sector won’t do, and the public sector can’t afford.

There were, however, complaints from a number of voices over how public agencies crowd out a stream of private money otherwise poised to flow in to African economies. Although Donald Kaberuka (President of the African Development Bank) countered that any small private investment that had taken place in infrastructure was because public agencies had brought it in.

Whilst Meles asserted that the Ethiopian government would continue to be vigilant over the commercial “˜whizzkids’ who “come in and use instruments that we don’t understand,” Jubril Tinubu, CEO of the Nigerian firm, Oando – an energy servicers provider – countered that African governments shouldn’t be scared of such people, and instead must realise that the private sector is much bigger and can do things more quickly and cheaply than government. In Nigeria, at least, it is government that is the problem.

Amid the bullishness about economic growth there was caution from, amongst others, Kofi Annan, who stressed the importance of not confusing economic growth with economic transformation. Much work still needs to be done to make African growth inclusive, and the GINI coefficient must be viewed as a central indicator of effective economic policy.

Aside from Meles, several other big names played a significant role in the forum. South African Finance Minister Pravin Gordhan did his international reputation no harm with his measured style, always keeping the most disadvantaged people as the focus of discussion. During a panel on market integration, whilst other panellists were distracted by the bluster of continental currencies and the Trans African Highway, Ngozi Okonjo-Iweala, Nigeria’s Minister of Finance, displayed her characteristic good sense. She pointed out that organic integration, whether it be informal border trade, or the multinational African staff of South African universities, was already taking place outside of big, top-down projects.

Okonjo-Iweala is clearly a popular figure across the continent – this was shown by the near universal support her candidacy for President of the World Bank received from her African constituents. Like Gordhan, her instincts seem to be in support of the poor, whilst her keen economic brain seeks to facilitate the free movement of goods and people to unlock commercial potential. The World Bank’s loss is Nigeria’s gain.

So what was the prevailing feeling about this year’s WEF? Whilst Meles demonstrated his star quality (with a roguish tendency towards the autocratic and nationalistic) there were a number of other figures of real stature in attendance with claim to positions of continental leadership. Whilst it would be hard to identify a grand narrative, the technical discussion was frighteningly high, underlining the quality of African leadership now available in both the public and private sectors.

It’s difficult to think of a panel where a non-African speaker really stole the show, and the most high-profile Western politician in attendance, Gordon Brown, seems to be far better regarded in Africa than he is in the UK. Coming to the continent must be a relief, although it can only be a shock returning home, where it’s been 2 years since anyone referred to him as the PM. Maybe it tells us something about Meles, who can’t seem to fathom that a political heavyweight like Brown would ever allow himself to be removed from power.

We’re told the war is not with ordinary Tigrayans. Yet as thousands suffer and our compatriots remain silent, that’s how it feels. As a child growing up in the then ...
By continuing to browse this site, you agree to our use of cookies.