Terrorism in West Africa: The Anarchy That Hasn’t Come – By Charlie Warren 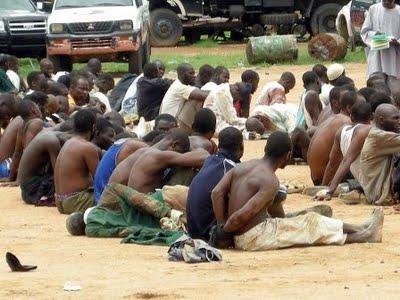 Suspected Boko Haram members after its original 'defeat' in 2009.

In 1994, journalist Robert Kaplan wrote a controversial Atlantic article, “The Coming Anarchy,” warning of West Africa’s ungoverned spaces, disease-ridden slums, weak borders, and impoverished masses. Kaplan declared: “we ignore this dying region at our own risk.” In 2004, Douglas Farah and Richard Shultz published a Washington Post op-ed that picked up the argument where Kaplan had left off. West Africa had become a terrorist sanctuary. Three years after the 9/11 attacks, the authors proclaimed, “weak and corrupt governments, vast, virtually stateless stretches awash in weapons, and impoverished, largely Muslim populations make the region an ideal sanctuary…The now-identifiable presence of al Qaeda in other countries shows that these once-marginal wars and regions matter. We ignore the warnings at our peril.”

History has not borne out this “coming anarchy” of terrorism, and West Africa is not rife with international extremism. Alas, the region is not beyond terrorism’s grasp either. This means several longstanding arguments about extremism in West Africa need to be carefully revisited.

Conventional wisdom separates transnational, Salafist-inspired terrorists from local, politically marginal insurgents. However, the available evidence in West Africa suggests one ought to view things differently. Even the most well connected Al-Qaeda affiliate in the Sahel and West Africa, Al Qaeda in the Maghreb (AQIM), has a variety of influences. AQIM’s predecessor, the Salaï¬st Group for Preaching and Combat, wanted to depose the Algerian government. The group officially aligned itself with Osama bin Laden in 2006 and changed its name to AQIM in 2007.

Boko Haram, a Nigerian insurrection founded by Mohammed Yusuf in 2002, has even more opaque influences. The group’s actual name provides one such example. Boko Haram is Hausa for “˜Western education is sinful,’ yet the group’s members seldom, if ever, use that term. Adherents instead prefer Jama’atu Ahlis Sunna Lidda’awati Wal-Jihad (“˜People Committed to the Propagation of the Prophet’s Teachings and Jihad’)””hardly a name conducive to the pithy labels preferred by governments or journalists alike. Northern Nigeria has also witnessed extremism in the recent past, so Boko Haram’s emergence is not groundbreaking either. During the early 1980s, millenarian uprisings led by Alhaji Muhammadu Marwa (also known as “˜Maitatsine’) left over four thousand people dead and included some similarities to Boko Haram’s rhetoric related to wealth, Western education, and the alleged graft of other northern Nigerian Muslims. Not unlike Boko Haram, Maitatsine’s revolts appealed to the young, disenfranchised northern Nigerians in cities like Kano, Kaduna, and Gombe. Thirty years after those uprisings, Boko Haram has played upon distinctly local concerns””including corruption, political isolation, and northern Nigeria’s relative poverty””with alarming success. While Boko Haram’s aims may be unique and ever evolving, its regional and religious contexts are not.

Since 2011, however, Boko Haram’s members have acquired some international practices: they recruit and deploy suicide bombers; they successfully bombed the UN headquarters in Abuja; they carry out other mass casualty attacks; and they are alleged to have met with, and perhaps trained under, AQIM.

Analysts have spent a great deal of time attempting to draw the line between “˜Boko Haram the local insurrection’ and “˜Boko Haram the global extremist group.’ Splinters of Boko Haram may have contacted other terrorist organizations in an effort to engage in training, but it’s difficult to connect individual actions with international ambitions. Worse still, it’s often a distraction. Boko Haram is better understood as a diffuse group ill suited to international terrorist labels, including the U.S. designation as an official Foreign Terrorist Organization. The false dichotomy surrounding Boko Haram not only narrows our definition of the violent extremist sect, but it also constrains our ability to find measured, evidence-based solutions.

At least four cross-border flows facilitate terrorism in the region. Weapons of varying types pervade West Africa, making the tools of violent extremism readily available. Semtex explosives can be purchased, and Nigerien authorities recently seized 1,420 pounds of the material and 445 detonators. As many as 15,000 of Muammar Gadhafi’s stock of man-portable air-defense systems (MANPADS) are unaccounted for; some speculate that AQIM possesses stockpiles. Although MANPADS have brought down at least eight passenger planes in Africa, small arms have led to far more casualties. Perhaps millions of Kalashnikovs flooded gun markets following the Cold War, and Boko Haram has become yet another group to use them during its hundreds of deadly attacks since 2010.

Illicit transfers of money via remittances and cash happen, and there is little capacity to monitor all transactions in largely unbanked countries. With mobile money transfers, cell phones could also send and receive illicit funds, but the services are not yet widespread.

West Africa’s drug smuggling routes provide opportunities for terrorist organizations to generate revenues. At least fifty tons of cocaine (worth $2 billion in Europe) travels through West Africa per year, with over one ton heading through the “narco-state” of Guinea-Bissau every night. Colombia’s FARC and AQIM already traffic drugs across the Sahel and into Europe.

People also move across borders. Militants have fled Libya for the Sahel in large numbers. Kidnapping has proven to be a lucrative funding stream for AQIM, and they have made a business of capturing Westerners. AQIM has fetched ransoms as high as $6 million in one instance and acquired tens of millions of dollars in kidnapping fees since 2006.

Although weak borders may aid terrorists, two distinctions are essential. Smuggling and banditry are hardly new to the region: illegal goods have traveled over the Nigeria-Cameroon border for years and similar flows cross the Nigeria-Benin border. International boundaries are not completely leaky either. West African states may not exercise a uniform rule of law along their boundaries, but they do have an intricate web of roadblocks, some physical and others more bureaucratic. Observers should not overstate Africa’s porous boundaries.

While many observers have traced terrorism to West Africa’s poverty and crime, few have examined the role of political instability. The relationship between terrorism and a more common scourge in the region””electoral violence””is not well known. However, one can reason that prolonged election conflicts could create space for terrorist groups in more stable countries or, at the very least, distract politicians and security services. Nigeria’s tragic post-election violence of April 2011 provides one possible example. The strife thankfully stopped short of prolonged conflict, but it did sidetrack diplomatic approaches to handling Boko Haram.

Although scholars have not tested the relationship between electoral strife and terrorism, coups d’état and extremism may have some connections. Recent anecdotal evidence from Mali and Guinea-Bissau suggest that coups can help terrorist groups. Mali’s March 22 overthrow of President Amadou Toumani Touré’s government was not a one-off event but rather the culmination of a northern Tuareg rebellion. (The coup’s leader, Capt. Amadou Haya Sanogo, received military training in the United States.) At the time of writing, evolving power struggles among the FLNA, MNLA, Ansar Eddine, AQIM, and MUJWA make Mali’s future uncertain. Moreover, the coup set back counterterrorism efforts in the country, not to mention precipitated a democracy and human rights rollback. AQIM may have more control than ever before.

Meanwhile, Guinea-Bissau’s April 12 coup has worsened the security situation and diverted attention away from efforts to stem a growing drug trade. (In almost 40 years since independence, no president of Guinea-Bissau has finished a continuous term in office.) While it is difficult to predict the country’s future, its counternarcotics efforts show no signs of improvement in the near term.

However, if one overemphasizes the impact of recent government overthrows in West Africa, one ignores an important trend. Coups have declined steadily for decades. According to the Center for Systemic Peace’s dataset, there were twelve successful coups in West Africa from 1980 to 1990, ten from 1990 to 2000, and six from 2000 to 2010. Africa’s civil wars are also declining, and the region is not predisposed to conflict.

Many observers perpetuate the image of West Africa as a blank slate for counterterrorism experiments. Yet efforts have been ongoing for decades, and international, regional, and local frameworks already exist. UN Security Council Resolution 1373 (2001) established the Counter-Terrorism Committee (CTC) in an effort to stop terrorism in all of its forms. UN Security Council Resolution 1624 (2005) is designed to improve border security and encourage member countries to submit updates to the CTC. Unfortunately, West African countries provided irregular reports to CTC and even fewer reports per UNSCR 1624.

Other policies to stop terrorism predate the UN resolutions but have proven equally ineffective. The Organization of African Unity (OAU) first addressed terrorism in its 1992 Dakar declaration, and its 1999 Algiers agreement determined to “eliminate terrorism in all its forms and manifestations.” Regional groups include the West African Police Chiefs Corporation, the African Centre for the Study and Research on Terrorism, and ECOWAS‘ Inter-Governmental Action Group Against Money Laundering in West Africa as well as its Committee of Chiefs of Security Service. Numerous challenges confront counterterrorism teams in West Africa, ranging from poor coordination among different bureaucracies, to limited access to INTERPOL records, to regional language barriers, to the failure to incorporate international terrorist financing regulations into local laws.

Understandably, many countries have volunteered to train West Africa’s police and security services. The U.S.-led Trans-Sahara Counterterrorism Partnership (TSCTP) provides military assistance while the African Union’s Defense and Security Division undertakes some technical evaluations; special forces from Canada and other countries have trained Malian security services in the past.

Although developing capacity among local forces may be necessary, many West Africa security services have human rights records ranging from inconsistent to abysmal. In some egregious cases of extra-judicial violence, security services’ brutality may anger the same extremists that they seek to stop. More broadly, international support creates what one analyst described presciently in 2004 as “rent seeking” for counterterrorism funding: Countries depict themselves as victims of transnational extremism””not local terrorism””with the hope of receiving increased aid flows in return. When the Nigerian government describes Boko Haram as an “international“ terrorist organization in official letters to foreign governments, it really seeks security aid and counterterrorism funding.

Despite reasonable evidence to the contrary””terrorist groups have diverse influences, weak borders are never totally porous, political instability may influence terrorism in complex ways, and security solutions can backfire””many observers perpetuate Kaplan’s thesis. In March 2012, New York Times Africa correspondent Jeffrey Gettleman wrote a book review entitled “Africa’s Dirty Wars.” Gettleman described most African rebels as “thugs” but positioned Boko Haram as a global threat. He further cautioned that “some of the most organized, disciplined, and ideologically sophisticated rebels are the Islamist extremists.” However, after decades of similar warnings, the “coming anarchy” of international terrorism has yet to arrive in West Africa. There is good reason to believe that it never will.

Charlie Warren is a research associate at the Council on Foreign Relations.  This article first appeared on ISN’s Security Watch on May 25, 2012.