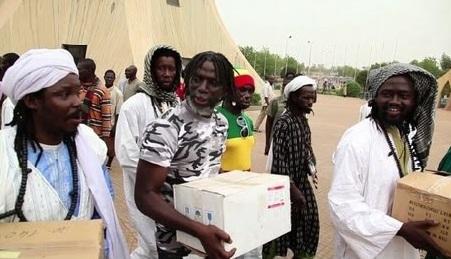 Food is distributed in Northern Mali.

While all eyes are on the ongoing political stalemate in Bamako, and the growing radicalism of groups such as Ansar Dine, Al-Qaeda in the Islamic Maghreb and MUJAO (Movement for Unity and Jihad in West Africa) in the north of Mali, it’s easy to forget that 1.3 million Malians are facing drastic food shortages this year.

It’s a silent crisis, mostly because the legions of humanitarian workers and journalists – who have worked hard to highlight the terrible effects of hunger and increased market prices of food in neighbouring countries such as Niger and Chad – are struggling to even get to northern Mali. Since the take-over of the north by the rebel Tuareg MNLA group, and the subsequent rise of the Islamist groups, approximately half of the country’s territory has become off-limits. While a small number of aid agencies such as MSF and Action Against Hunger are still operating, activities and travel are restricted and staff are working under difficult conditions.

The malnutrition figures are striking, and could potentially be worse than in other parts of the Sahel. Action Against Hunger, which is working in the north-eastern town of Gao, say that 60 percent of children there are showing signs of malnutrition, 30 percent of those are “˜global acute malnutrition’ and may need medical care. This is twice the level which would ordinarily trigger an emergency response by the aid community – “amazingly high” as AAH put it to me.

What’s more, prices on the local market have shot up since the rebels and Islamist groups took over the area, mostly because trade has been disrupted and banks and shops are closed. In Gao for example there are severe problems of cash flow, which means many poor families are having to barter their possessions in exchange for food. Residents of Timbuktu have told me how food stocks have been pillaged and warehouses burned. This has caused the price of a sack of millet to rise from 17.500 CFA to over 30,000CFA since April.

The crisis is compounded by the fact that 144,000 people have been displaced inside Mali by the fighting, according to the UN co-ordination office OCHA. Many of them have headed towards urban areas, but others have moved into the bush; with travel restrictions and insecurity outside of the main towns it’s almost impossible for aid agencies to reach them to assess the situation. What’s missing is an overall picture of exactly where the needs are greatest.

In some cases, it has proved challenging to negotiate access with the number of groups that run these areas, particularly as the precise territories they control have been constantly shifting. Most international staff working for agencies such as MSF and AAH have been pulled out and even national staff are cautious to move around. AS ICRC put it to me, negotiations for access for aid convoys is often with groups who have no clear leader, and little experience of dealing with humanitarian agencies. On top of that, most former Malian government officials have fled to the south, and there are believed to be armed bandit groups roaming the main roads. UN flights to the north have stopped.

Some help is starting to get through though. World Food Programme – the main organisation distributing food in the country – says that access is limited, but that they have been able to send three convoys from Mopti since May. The most recent is due to arrive in the coming days, and will distribute 100 tonnes of pulses and 30 tonnes of oil in Gao, Timbuktu and Kidal. It’s not an easy job though, WFP can only work through two local partners – the High Islamic Council and Action Against Hunger – in an area that makes up half the country’s territory.

AAH and MSF Belgium and Switzerland are still running emergency medical centres for the worst affected children, albeit only with local staff. But the supply of medicines, equipment and resources is also affected. ICRC told me that they’ve recently secured the delivery of fuel to the main hospital in Gao to keep the generators running.

The small hope is that the food situation may improve as the next harvest approaches – the “˜lean season’ reaches its peak in July as the annual rainy season ensures new crops can grow. The rains have already started across the Sahel, even in the extreme northern Malian region of Adrar Des Iforghas, and there are reports of fresh vegetation springing up.

However, this potential is over-shadowed by a warning from the UN’s Food and Agriculture Organisation (FAO) that the region could suffer a locust attack, as pest control methods usually employed in southern Libya have been disrupted by the civil conflict there.

There is no sign of an end to the political stalemate in Bamako, and efforts by neighbouring countries to send in a military stabilisation force were dealt a blow this week when the UN Security Council said it needed more information before it could authorise such a move. The silent crisis in northern Mali shows no sign of easing soon.