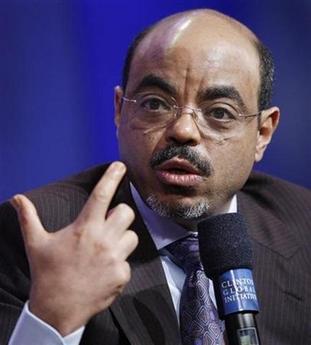 The late Meles Zenawi, whose death has sparked succession plans in Ethiopia and among those countries who rely on his regime for military support.

The death of Ethiopian Prime Minister Meles Zenawi was announced this morning, following complications arising after a long illness. Yet for weeks now, rumours have been flying around the internet that Zenawi had died in an overseas hospital, and that this news was kept quiet whilst the fierce succession battle took place. Whether true or not (and it would certainly not be the only time in recent months that the death of an African leader had been kept quiet until the struggle for succession had been won), the political elite in Ethiopia has almost certainly been seeking how to ensure a smooth transition since Zenawi’s last public appearance in mid-June.

There are a number of interesting questions that emerge from this, for Ethiopia itself, for the international community, and for watchers of African politics and leadership more widely.

*El Cid was a Moorish leader in Medieval Spain. Legend has it that during a siege of Valencia – during which El Cid died – his body was fitted with armour and hoisted upon his horse in order to bolster the morale of his troops.

Mike Jennings is  Senior Lecturer in Development Studies at SOAS and Chair of the Centre of African Studies.