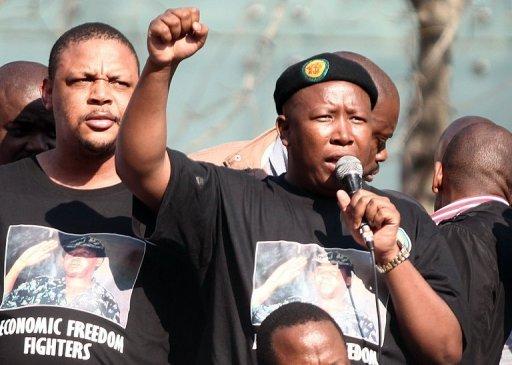 Julius Malema - his influence on South African political life is wildly exaggerated, as is commentary on the country's decline.

On 16 August 2012, 34 miners were killed and nearly 80 injured in confrontations with police, while scores more were arrested and allegedly tortured during a wildcat strike at Lonmin PLC’s Platinum Mine in Marikana, South Africa. The event was breathtakingly tragic and has highlighted the deep socio-economic fissures underlying South African society. Perhaps most tragic was that it took a crisis of such magnitude to alert many to the structural concerns it represents.

Yet, in his analysis of the event published on this website, Keith Somerville joins some of the more jaded international commentators assessing South Africa to signal the beginning-of-the-end for a country which has, he seems to suggest, failed in its post-apartheid endeavours. Somerville’s title – Mines, Malema and Mangaung: South Africa’s descent into a morass of corruption, greed and factionalism – is in itself concerning due to its its speed in condemning the country to the nefarious league of failed states.

There is much that troubles us about the article, especially that it is neither informative nor useful enough as a robust analysis, predicated as it is on a few select media sources representative of the rhetorical shorthand that too often these days stands in for South African political analysis. This bent in analysis is prone to exaggeration and simplification in comprising a feedback loop of sweeping statements; vast generalisations; and untested allegations, without affording sufficient attention to the profound contextual and historical forces which continue, understandably, to shape South Africa. In addition to this, the momentum effect of such analysis on political and economic sentiment wills a self-fulfilling prophecy for its veracity. Acknowledging the effect on foreign investor sentiment, those in a position to comment on South Africa to an influential audience must ensure that their statements are not hinged on the platitudes of attention-grabbing disaster pornography.

South Africa remains a deeply complex country; triumph and tragedy coexist in a daily dance of delicate social, political and economic forces. Our history, meanwhile, is pervasive. While there are many who may suggest otherwise, eighteen years is not sufficient to reverse three centuries of systematic race-based colonialism and apartheid. Yes, it is arguable whether the pace of change is sufficiently robust to address these structural constraints, but it would take an act of staggering naivety to fail to acknowledge the potent influence of apartheid in the tragedy that took place at Marikana. Resting on simplistic evaluations of government failure does not acknowledge South Africa’s multifaceted nature, as well as the need for commentary which contributes towards building the deeper levels of understanding necessary to construct a broader future.

This is not to suggest that analysis must be intentionally modest – indeed, the calamity of Marikana undeniably calls for an appropriately robust response. Yet, we fear that Somerville’s article focuses too much on the popular politics of South Africa, and does not sufficiently contemplate the wide range of actors complicit in the tragedy: in addition to the government, mining executives, the miners themselves, the unions, the police and armed forces, and South Africa’s increasingly apathetic privileged class must all consider their direct or indirect role in allowing the tragedy to occur.

Last year, Lonmin’s top three executives took home pay equivalent to the entire gross annual remuneration of all 3,000 striking rock drill operators at Marikana. South Africa remains one of the most unequal countries in the world, and Johannesburg, which lies close to the Marikana mine, its most unequal city. In a country such as South Africa, this gulf, which is mapped in other industries, is unsustainable. Insufficient efforts to lift social conditions around many South African mines in line with the much-heralded mining charter are also a contributing force. Marikana must inspire a deep and lasting interrogation of how to overcome these myriad structural challenges. Surely the need to do so inspires a similar need for analysis which emboldens this pursuit? If, as Somerville seems to suggest, the end is nigh for South Africa – the inevitable decline is in full motion – then there is little point in this effort. But we disagree, we see the remarkable change that has taken place in the country since 1994, and we are confident that the means exist to surmount the equally towering challenges that continue to plague us almost two decades after the end of apartheid.

Beyond the above, two more specific shortcomings of Somerville’s article warrant attention. The first is the importance placed on the mining sector as a means to display South Africa’s “descent”. While mining certainly remains a critical cog in the economy, its real contribution to gross domestic product today stands at around 5 percent. South Africa’s diverse economy, increasingly linked to alternate non-traditional poles of commercial influence throughout the emerging world, will not simply crumble in light of the ongoing labour unrest across the platinum belt or the resultant foreign divestment taking place just now from the mining sector. Further, its growth prospects remain rosier than that of Europe. Economic analysis of South Africa should rely on real data, and not sentiment.

Secondly, Somerville joins several others within and outside South Africa in continuing to equate the hullabaloo surrounding the political opportunist, Julius Malema, with real influence.  The fiasco which greeted Malema’s speech to suspended South African National Defence Force (SANDF) employees last week, certainly exacerbated by the placing of the army on “high alert” by South Africa’s Minister of Defence and Military Veterans Novisiwe Mapisa-Nqakula, is emblematic of this disconnect.  Malema himself laughed at the overreaction, while minister in the presidency, Trevor Manuel, noted there were more journalists than soldiers present.

As we head towards the ANC’s elective congress at Mangaung in December it is likely that what political analyst Steven Friedman has called the “season of breathless commentary” will develop once again, with Marikana adding a deeply emotive element to these discussions. It is, however, important for commentators to remain composed, and imbue analysis with the necessarily balanced interpretation of complex forces. Resorting to simplistic platitudes, and hanging heads in resignation to the inevitable Armageddon, as Somerville has done, will not only be ineffectual – but also damaging.

The Marikana tragedy must be used as a means for South Africans to robustly and honestly evaluate the state of the nation. We believe it could become the catalyst for South Africa to take meaningful action on inequality. In the wake of the Marikana tragedy there has been a weight of commentary from South Africans piecing together their feeling on what the country has become, most of it has been deeply sobering. But at the very least, such commentary has been nuanced and reflective about South Africa’s complex reality and constructive about the way forward – which, in our opinion, Somerville’s was not.

Simon Freemantle and Desné Masie grew up in post-apartheid South Africa. They have written this article in their personal capacities.