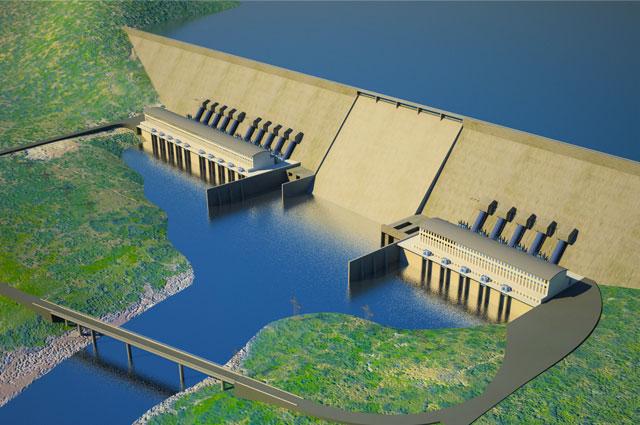 Artist's impression of the Renaissance Dam, under construction on the Blue Nile in Ethiopia.

Ethiopia’s Renaissance Dam, built on the Blue Nile near the Ethiopian border with Sudan, is all about producing electricity. And electricity is a key to Ethiopia’s future. However, historically, proposed exploitation of these resources has brought it in to diplomatic conflict with downstream states, namely Egypt. Now Ethiopia has more successfully levied its regional diplomatic power to ensure the Egyptian government is no longer able to block its attempts to produce the hydroelectric power and irrigation necessary to power its growing economy.

Whilst agriculture currently dominates the Ethiopian economy, it struggles to feed the current population. Agriculture in its current form will not be able to provide for the needs of the next generation. Industrialization and urbanization are key to providing employment and reduce poverty in the country.

Industrial development however, has its own requirements. It demands ample availability of affordable, regular, and reliable electricity. The Renaissance Dam will remove a key obstacle to Ethiopia’s industrial development, both in the export of surplus electricity, and in its contribution to developing domestic industry

China’s industrial development provides a good example of this kind of process the Ethiopian government should seek to emulate. Forty years ago in China’s coastal zones, there began a rapid expansion of labour-intensive light industries, aimed at export markets. This development, spurred by the availability of electricity and relatively cheap labour, made significant contributions to China’s rapid economic growth. This became part of the industrial history of Asia, and a development path that India followed some 20 years later.

Take a stroll around Mumbai’s huge Dharavi slum and you will see what labour-intensive light manufacturing can do. Thousands of small and medium light manufacturing shops are present, employing huge numbers of workers in areas ranging from agro-processing to production of leather goods. This includes small assembly plants, putting together electrical goods from parts purchased from other such small manufacturing shops.

Whilst they may appear relatively primitive, and their output may not always be of premium quality, it sells and is cheap. Such manufacturing and assembly shops are largely low-investment, often relatively low-volume affairs, but their owners are obviously earning money, or they would not be there. Their employees are also earning livelihoods that are better than what they do in the places from which they came, or they as well, would not be there. And their earnings are ploughed back into the economy.

India and China have made huge investments in providing the electricity that powers their rapidly growing economies, most of it in power plants based on fossil fuels, mainly coal and oil. But the costs of both are increasing rapidly, along with the costs of producing electricity, and therefore, of a wide range of industrial production.

According to the Ethiopian Investor newsletter, higher production costs in China’s Pearl River Delta are driving manufacturers offshore. Higher labour and energy costs are making it difficult for many local manufacturers to compete, especially those producing cheap labour-intensive products with little technological or capital input. This could provide an important market entry point for Ethiopia, with its cheaper electricity and labour costs.

Ethiopia’s Renaissance, and Gilgil Gibe III dams (built on the Omo river in the South of the country), will ensure an ample supply of electric power for development of light industries and other needs, including agro-processing. Examples of the impacts of electricity supply can be seen in India, where the availability of cheap electricity has contribute to the growth of a large informal sector in rural areas and small towns, where it makes an important contribution to employment.

Similarly, as in India, there is also potential where affordable electricity is available for pump irrigation in some areas, from ground water sources, small streams, and micro-dams. This can enable subsistence farmers to become smallholder commercial farmers, growing higher value crops for accessible markets, rather than staple grains.

The availability of cheap hydropower can also open up new opportunities for irrigated agriculture, producing high-value crops, and double-cropping based on dry season pump irrigation. For example, the proposed Megeche scheme near Lake Tana was designed to provide pump irrigation on 25,000 hectares. It lies in one of the relatively flat and unbroken areas of the western highlands that are suitable for large scale surface irrigation.

Irrigation potential in the western highlands is limited, but estimated at over 200,000 hectares for large and medium scale irrigation, with additional opportunities for small-scale irrigation in many areas. But development of this potential on an economically viable basis will require the availability of cheaper sources of power. As in India’s Punjab region, the availability of cheap hydroelectric power could open the way to extensive development of pump irrigation.

There is considerable potential for pump irrigation in the western and southeastern lowlands for both commercial farming and livestock production. Here again, the availability of cheap hydropower can play a key strategic role in enhancing both the volume and the profitability of such production, and enhancing its contribution to employment and to local and overall national development.

Ethiopia is Africa’s top producer, and exporter of livestock. Those not used for local consumption, are largely exported “˜on the hoof’, at a fraction of the cost of their end products. Establishment of modern slaughterhouses and processing plants will open the way to moving up the value chain enabling the country to produce quality processed meat and livestock products. This will also help the country to capture a much larger share of the value of its livestock production.

Ethiopia’s dam building program has led to tensions with Egypt, which has claimed the right to hegemony over use of the Nile waters – a claim rejected by the upstream countries, which are the source of nearly all of the Nile waters. Egypt bases its claim on a colonial-era agreement between the British protectorate in Egypt (1929) and the British colonial governments of the upper Nile Basin countries, and a bilateral treaty in 1959 between Egypt and Sudan, to divide the entire flow of the Nile between them.

In the past, the upstream Nile Basin states, including Ethiopia, lacked the financial resources to build their Nile water infrastructure, while Egyptian influence with the World Bank and other International Financial Institutions (IFIs) blocked them from access to international loans or this purpose. The final excuse for the IFIs was provided by indirect Egyptian threats of war if any upstream country should dare to interfere with the Nile waters.

The Egyptian narrative makes the case that Egypt needs the Nile waters for its basic survival. But other narratives also need to be heard, namely that of Ethiopia, which provides most of the water, while being blocked from using a share to prevent recurrent famine and reduce its own poverty.

Like Egypt and Sudan, the nine upstream Nile Basin states need to use the Nile waters, for their rapidly increasing development needs, famine prevention, and poverty reduction. They were roused by Egypt’s attempts to block them from using the Nile waters, even for such non-consumptive uses as production of hydropower that would not significantly affect the quantity of water reaching Egypt.

The CFA makes it clear that no state will exercise hegemony over the Nile waters and their allocation, or claim exclusive rights. The main purpose of the Nile Basin Initiative (NBI), which led to the CFA was the establishment of a mechanism to enable the fair and equitable allocation of the Nile waters, and ensure that the interests of all of the Nile basin countries are taken into account.

The launching of the CFA in May 2010 was a shock to Cairo, which had previously thought it could be blocked. The shock was all the greater as in the same week that the CFA was launched, Ethiopia’s Prime Minister inaugurated the Tana-Beles Project on the Beles River, a tributary of the Blue Nile. The Tana-Beles Project was started in 1988, but could not be completed as Egypt blocked an expected loan from the African Development Bank (AfDB) that was needed to complete the project.

Less than a year after the signing of the CFA came another shock, when Ethiopian Prime Minister Meles Zenawi laid the cornerstone for construction of the Renaissance Dam. This was not to the liking of Egypt, but Cairo recognized that there was little that it could do about it. Ethiopia had already made it clear that it reserved the right to use of the Nile waters arising within its own territory for its own development.

Having made that clear, it allowed Egypt to take part in a joint commission to assure it that the Renaissance hydropower dam would not reduce the amount of water reaching Egypt. Once Ethiopia found non-IFI sources of funding for its Nile dams, Egypt’s threats of war came to an end.