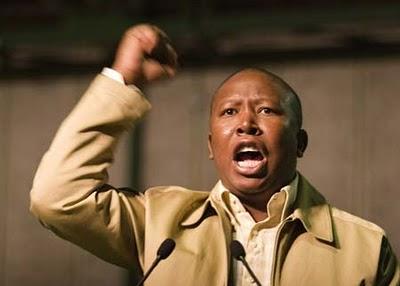 Populist Julius Malema has been central to business fears over calls for extractive industry nationalisation in South Africa.

The rise in commodities prices over the past decade (referred to by some economists as the “˜commodities super-cycle’) has led to a renewed debate on the role of the state in Africa’s mineral resources sector. Governments are increasingly exploring new channels through which state ownership and/or control of strategic mineral assets can be optimised.

Calls for greater state involvement in mining sectors have come in various forms, ranging from outright nationalisation and expropriation of natural resources, to simple restrictive measures on the control or use of natural resources by corporations. Demands for increased state intervention in the “˜commanding heights of the economy’ are often invoked as a political strategy by populist leaders who ride popular sentiments that foreign participation in the extractive industries has little impact on domestic socio-economic development. As such, there is enormous political pressure on governments on the continent to be seen to be proactive in occupying pivotal and strategic roles in the mining sector. In contrast, state intervention in the African mining sector has generally been met with concern by private investors who increasingly regard “Resource Nationalism” as the primary risk to mining operations on the continent.

What is clear is that resource-rich African countries are determined to capitalise on high commodity prices in order to bolster weak state balance sheets. Governments in the region are revising their taxation systems and renegotiating unfavourable agreements as a means of capturing greater rent. Although the experience from the previous wave of state-ownership in Sub-Saharan Africa was less than positive, the desire to capture some of the opportunities brought by the present high price of commodities is powerful and is underpinned by the belief that states are better prepared to actively participate in their mining sector than before.

Countries like Botswana, Ghana, Namibia and Zimbabwe have been particularly bold in their approach towards state ownership of mineral assets. In 2012, Botswana required De Beers to relocate its sorting operations from the United Kingdom to Botswana, thus transferring a US $6.5 billion per annum business and associated jobs to the country. The government expects this move to transform the local economy by bringing higher-value beneficiation employment. Similarly, in May 2012, the Namibian government announced its intention to grant Epangelo – its state mining company – exclusive exploration over all strategic minerals including copper, gold, zinc, coal and uranium.

The taxation regimes governing the African mining industry have also been a focal point for many governments in 2012. For example, in Ghana, the government announced plans to raise taxes on mining companies from 25 to 35 percent and introduce a further 10 percent windfall profits tax to the existing output royalties of 5 percent. Similarly, Zambia doubled royalties on copper to 6 percent in 2011 and Cote D’Ivoire announced plans in September 2012 to introduce a windfall profit tax on their gold miners by 2013.

The most extreme example of state intervention in the minerals sector in Africa has been that of the Zimbabwean government, which through its indigenisation policy, is demanding a 51 percent equity stake for locals in all mining companies operating within the country. The government also plans to outlaw the export of raw platinum from the country.

The issue of local participation in mining – be it through beneficiation, taxation or direct ownership – has gained extreme importance over the past three years. The key challenge now facing African governments is how to optimise state involvement in the minerals sector whilst maintaining an acceptable level of policy certainty and investor confidence to preserve or increase the investment capital flows that are necessary for the continued development of the industry.

On the issue of complete nationalization of mineral assets, the reality is that most nationalized mining companies in Africa have had very little operational success and many have since been privatised. The inherent failures of state-ownership structures in mining were seen in the late 1970s and 1980s in Zambia and Tanzania where blanket nationalisation programmes were implemented without corresponding investment in infrastructure and prospecting ventures. These issues were compounded by a period of slumping commodity prices which drove up production costs and ultimately pushed states deeper into debt. The nationalisation policies were subsequently reversed with enormous damage done to investor perceptions of the sustainability of national mining companies. For this reason, blanket nationalisation is today generally discounted by African governments as a legitimate economic policy choice.

However, it is worth noting that poor performance is often not a direct corollary of state ownership. There are positive examples of successful state owned mining companies in Botswana, Namibia, and outside the continent in Chile (Coldeco), India (NALCO) and Finland (Outokumpu). Partially state-owned Debswana Diamond Company and Namdeb are potent examples of how African states can be commercially active in the minerals sector alongside private sector players.

The structure of the joint ventures between governments and private mining companies differ from country to country according to the nature of the asset in question at the time of negotiation. No doubt some of those currently in existence are sub-optimal from the perspective of state ownership. Nevertheless, “true” joint ventures are positive in that they encourage a move away from zero-sum thinking and help align the objectives of both stakeholders, thus improving transparency and ensuring the long-term stability of mining projects on the continent.

Another avenue in which African governments can actively participate in the minerals sector is through the development of state-owned commercially competitive mineral development companies such as SODEMI in Cote D’Ivoire, which acts as a national alternative to private junior exploration companies. While concerns remain across the continent on governance, why shouldn’t some African countries have their own version of a Coldeco? Such structures provide a platform for the state to involve itself in the minerals sector in a commercial and thus equitable manner.

What is needed for the successful optimisation of the state’s role in the minerals sector is a new dispensation in which there is holistic understanding of the motives and concerns of the private sector and an acceptance of the long-term and cyclical nature of the sector. For the moment, governments are interested in expanding their role in the mining sector based on the assumption that the current commodities boom will last. As such, demands for an increased share of the rents during times of high metal prices are understandable. However, the option of blanket nationalization of mineral assets by the state needs to be approached with extreme caution. The developmental impact of minerals cannot be maximised if the minerals themselves are not productively and profitably extracted. The mining sector is by nature vulnerable to commodity cycles and the industry often requires capital injections when prices are low – precisely when the state is least able to provide them.

Maximising the impact of mining in Africa will require the maximisation of investment and productivity of mining projects in the long-term. What this demands from African governments is a balanced policy solution that allows for the states’ equitable participation in the minerals sector but one that also promotes investor confidence in the country. In this context, the “commercial” approach of partnership, that could in the longer term form the basis for national mining companies, seems to be the most appropriate policy response – trying to move resource extraction away from a zero sum argument, as far as private investors are concerned, waiting out populist calls for greater state participation in mining is a mistake.

Such calls will recur so long as mining companies are operating profitably and the state’s participation remains unsubstantial. An earnest effort at alignment of interests by both government and the private sector is the best hope for a sustainable mining sector in Africa.

Zanele Hlatshwayo is an Associate at Civitas Partners