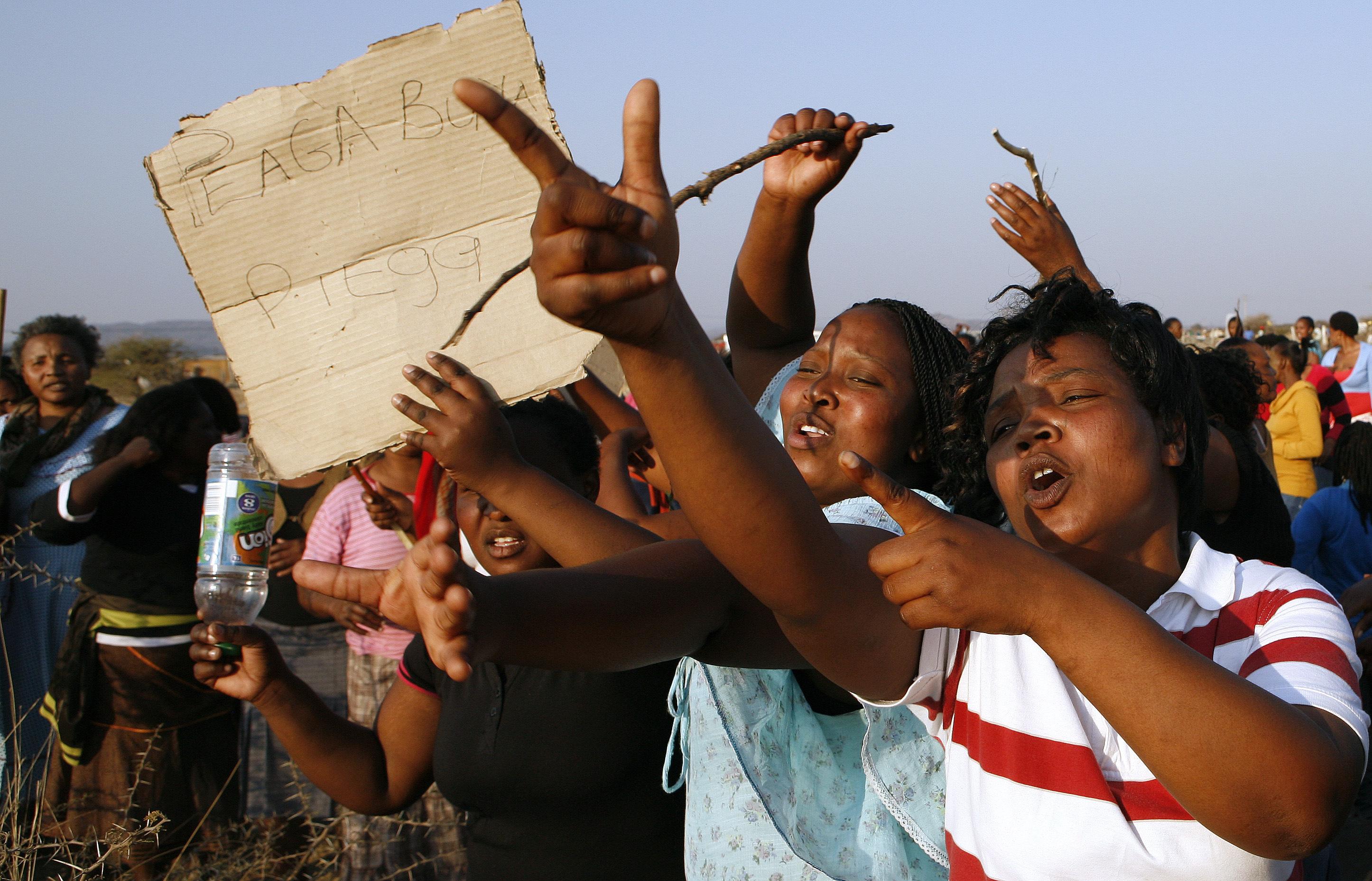 Protestors after the shootings at the Lonmin-Marikana mine in South Africa.

The South African economy has recently taken a major blow due to a much-reported epidemic of labour disputes in the mining industry. Approximately 50,000 mine workers have gone on strike across companies, with violent clashes leading to injuries and deaths, as well as billions of dollars in lost production. The visible financial impact has been seen in the destabilisation of the rand and the downgrading of the national credit rating.

Behind all the drama on the international market stage is a story newspapers largely neglected: the unsustainable working conditions and mismanagement of South Africa’s labour relations in the mining industry. The industry has been the backbone of South Africa’s economy since the late 1800s – the country is a global leader in the production of precious metals including gold and platinum, and also holds third place in global coal production.

International investor perceptions of the South African precious metals market have, however, been damaged in recent months. The South African Reserve Bank declared mid-August that debt markets have become “vulnerable to domestic socio-economic concerns which garnered renewed foreign investor concerns following labour unrest.” The rand is now underperforming in comparison to other currencies in many emerging market economies, with a 6.8 percent drop against the dollar in October 2012.

Consumer confidence in the South African metals market is waning. High unemployment, bank debt problems, and slowing growth will contribute to a divestment trend in the global market. If these indicators continue to head in their present trajectory, South African banks will have difficulty financing economic development.

South Africa’s mines employ about 500,000 workers. As with mining anywhere around the world, working conditions are very harsh. Environmental hazards and accidents present a real life threat to the men and women who work on site and underground, although fatalities have declined thanks to improving safety methods.

Given the profitability of precious metals compared to the severity of working conditions and physically demanding nature of underground drilling, it is of no surprise that workers would seek to improve their pay. Such widespread outrage among mine workers across so many companies is not a coincidence – it is the outcome of systematic errors and poor communication from company leaders, combined with market pressures to keep profits up and costs down.

Rather than address workers’ concerns and negotiate with their unions using mediators or other neutral legal authorities, companies have opted for an iron-fist approach – dismissing thousands of workers and calling in armed security leading to brutal clashes at more than one site.

Lonmin, the third largest platinum producer in the world, was at the centre of a hugely publicised violent uprising at their Marikana mine. Workers earning 4000 – 5000 rand ($484-$605) per month demanded an increase to 12,500 rand ($1,512), which for some represents an increase of up to three times their current salary. Lonmin responded by firing 9,000 workers in May 2011 for “unprotected industrial action”.

In August, 3,000 miners participated in a protest that lead to 34 deaths and nearly 80 serious injuries. Rock driller David Nkolisi stated “We were killed for asking our employer to pay us a decent salary for hard work deep underground”. Many native South Africans working in the mining industry might wonder how much conditions have really changed for them since the end of apartheid if they are not even able to negotiate for improved wages and better working conditions.

Gold Fields Ltd saw 28,000 workers go on strike. The company subsequently obtained a court order ruling that the strike was illegal and dismissed 8,100 workers. 7,300 have since appealed against their dismissal. As some workers have returned, Beatrix mine has resumed production and KDC mine is in the process of resuming activity. Once again, rather than conduct systematic negotiations to consider workers’ demands, companies ran to the courts seeking methods to legally suppress calls for stakeholder dialogue and compromise.

Anglo American Platinum Ltd sacked 12,000 workers for taking part in an “unofficial strike” and as a consequence to suspension in production, their full year output forecast dropped significantly. Three weeks ago they agreed to reinstate the dismissed miners, offering them a pitiable one-off hardship payment of 2,000 rand ($230) “to facilitate their return”. This small sum does not address the workers’ salary increase demands or any other labour concerns.

12,000 workers from AngloGold Ashanti took part in industrial action this year and the company is now facing a debt ratings reduction by Standard & Poor’s after its production was paralysed for over a month. Their stock has dropped 1.3 percent to 280.49 rand as of Friday, October 26th and bids slipped as low as 279.00 over the weekend. It is conceivable that the profits lost from labour conflicts and suspended production would have financed the wage increases demanded by workers and prevented AGD from being on the list of recently shamed South African mining companies.

Harmony Gold Mining is considering firing 5,400 employees for striking, although 98 percent of striking staff have recently returned to their Kusasalethu mine. Because of labour conflicts, the company’s mining output was 3.3 percent lower this year. Forcing people to return to work on threat of dismissal will not resolve the underlying problem of unsatisfactory working conditions.

These conflicts will likely resurface in the future if companies are not willing to reinvest some of their profits back into labour relations and employee incentives.

President Zuma has appealed to striking workers to return to work and has asked companies to freeze their wages, along with demanding an inquiry into the violence at Marikana mine. The President’s willingness to side with the companies rather than his own citizens is a concern. Furthermore, labour union rivalries with groups tied to opposition parties has led some to conclude that the conflicts were fabricated by the unions. Some speculate that exorbitant salary demands before election season were politically motivated to sway the election results.

These recent conflicts have highlighted the limit between company profit margins and the pressure that can be put on human capital. Efforts to reduce operating costs and improve market value in South Africa’s precious metals industry have obviously hit a brick wall when it comes to labour relations. This has resulted in loss of life and an international scandal impacting the South African economy. Improved labour conditions and ongoing management of labour union relations across the country’s precious metal industry could have seen these conflicts avoided or at the very least, better managed.

Simply refusing to negotiate with workers or firing them en mass obviously can lead to disastrous consequences for the workers, for the company, and for the national economy, as international investors are quick to move their funds to safer markets. For a sustainable mining industry, consumer confidence should be valued at the same measure as labour confidence.