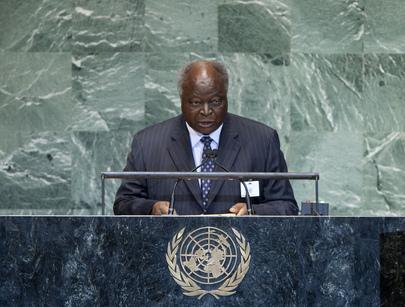 President Mwai Kibaki leaves with a $200,000 golden handshake, but what kind of political settlement will he leave in his wake?

Everyone is strapped in and the Kenyan election roller coaster has begun. A cacophony of electioneering propaganda is being blasted out through every medium. The political godfathers are flying around the country firing up their supporters, screwing down the vote, constituency by constituency and promising heaven after the March 4th poll. Kenya is poised at the top of a ride that could fling the country violently off the rails and send it to hell – as it did after the 2007 election. Or it could take the country elegantly into a dynamic new era, a transformation that would make it one of the most democratic countries in the world. John Githongo, a civil society activist, says: “the new world is being born but the old order has not yet died”.

Since the last disastrous election a new constitution has come into force which has divided Kenya into 47 new counties. Each will have its own governor and parliament which will decide how its budget is spent. But devolution goes even further than that. The County Governments Act stresses democratic participation at every stage of decision making: mass communication and consultation on development plans, civic education programmes, debates at every level from the village to the country parliament, the right of the public to demand – and get – full information about plans and policies and the right to petition the courts. The overarching ideology is that the people will decide.

The problem is that this idealistic and finely constructed constitution is managed by politicians who are largely tribal godfathers. Uhuru Kenyatta, the Kikuyu leader, is the son of the founding president, Jomo Kenyatta. Raila Odinga, the Prime Minister, is a Luo chief and the son of Oginga Odinga, Jomo Kenyatta’s greatest rival and critic. While the constitution prescribes democracy, transparency, good governance and idealism, this election is all about personal and tribal loyalties. However, no single ethnic-based party can win outright, so via a protracted and bewildering dance the parties have formed coalitions to secure victory. There are also a bewildering number of parties on the ballot papers but almost all are part of alliances representing, or fronts for, the main candidates and parties.

The registration of party candidates at the grass roots this week was all but wrecked in many key areas by chaos and violence; most of it organised and paid for both within and between some of the leading parties. Under the law, if the process is flawed, the party headquarters decides who the candidate will be. This ensures that the party bosses keep control of the lists and locally popular candidates are kept out.

Politics in Kenya is exceedingly lucrative – with allowances, MPs are paid a third more than their British counterparts. The President gets 10 percent more than his opposite number in the US. They recently tried to award themselves a hugely increased retirement package but it was vetoed by the retiring President, Mwai Kibaki, although he did sign into law his own $200,000 golden handshake. So getting nominated at a local level (the first rung on the ladder to wealth and power) is very important. All you need is cash, the backing of a godfather and the right ethnic credentials. Issues and policies are hardly mentioned. Winning a parliamentary seat in Kenya is also like winning the lottery.

But already The People are finding their voice. When Mr Odinga tried to nominate his sister and brother to the list of candidates in his own county, local people had other ideas and cast their votes overwhelming for others. Ms Odinga was forced to retire. Elsewhere however, good candidates were outmanoeuvred by cunning or cheating candidates backed by the bosses.

So far it looks as if, at a local level, ordinary people were trying to flex their muscles, but judging by the names that ended up on the lists at national level, the same old faces and parties still dominate. Odinga led the national presidential polling last week with 46 percent of the vote and Kenyatta had 40. That means the presidential vote may go to a run off which is more difficult to predict because Odinga has more enemies than Kenyatta who has only recently become involved in frontline politics. But there is an even stronger and widespread feeling that the Kikuyu, Kenya’s largest ethnic group, having had the first and third presidencies of the country, have too much political and economic power. This could damage Kenyatta. The winner will be the one who has the deepest pockets to build the biggest coalition out of the remaining 14 percent.

There is also another exceedingly dangerous factor supercharging this election. Kenyatta and his running mate, William Ruto, the political Big Man of the Kalenjin ethnic group, face charges at the International Criminal Court. The hearing will take place just before the second round of the presidential poll. Will the violence of 2007 polls, which left more than a thousand people dead and the nation deeply divided, be repeated this time? A vote in which one candidate has nothing to lose could turn into civil war. Barricades and street battles were widespread at the nomination stage last week.

The accepted wisdom is that during the murderous ethnic cleansing and street battles of 2008 Kenya looked over the precipice. The godfathers decided to call off their dogs of war or Kenya would be wrecked. International negotiators led by Kofi Annan, flew in and pieced together a deal – part of which was a carefully balanced list of those to be investigated by the ICC. It allowed a coalition government to be formed with the rival parties but cited leading figures from both sides.

There is an assumption in Kenya that the ICC will negotiate a deal which allows charges against elected politicians to be deferred or the court hearings changed to suit the electoral timetable. Once they realise that this is not the case and the Court will proceed at its own pace, those indicted may feel they have nothing to lose and their best bet is to get elected by any stratagem available, in the hope that Kenyans and other African leaders  will support them in office and defy the Court or get the hearings held within the continent.

In any other African country except possibly South Africa, Nigeria and Egypt, they would probably be proved wrong, but Kenya is also of strategic importance for western economic, security and political interests in the region, consequently its indicted politicians might have a chance. Again and again over the last 50 years Kenyan politicians have been able to defy Western diplomatic pressure knowing Washington and London needs Kenya more than Kenya needs them. Now that China is an ally and very big trading partner and many fellow African rulers are uneasy about the Court, they may reckon their hand is even stronger today.