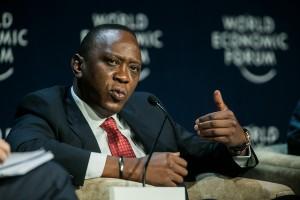 At the World Economic Forum two weeks ago, Kenyan President Uhuru Kenyatta said that Kenya will meet its obligations under the Rome Statute even as he seeks to clear his name at the ICC. But a recent not-so-confidential letter to the UN Security Council suggests otherwise.

On May 2, Kenya’s permanent representative to the United Nations, Ambassador Macharia Kamau, submitted a formal request to the Security Council seeking a termination of the ICC cases against Kenyatta, Kenya’s Vice President William Ruto and Joshua arap Sang for their alleged roles in Kenya’s 2007/08 post-election violence, which resulted in the deaths of over a thousand people and the displacement of hundreds of thousands.  In the short history of the ICC, this is the first time that a government has sought to terminate judicial proceedings.  This is particularly noteworthy because, while Article 16 of the Rome Statute does allow the Security Council to temporarily postpone an ICC case or investigation when it represents a threat to peace and security, there is arguably no basis to terminate an ICC case. Indeed, the request itself, impassioned though it may be, makes no compelling argument to that effect, but implores the intervention of the Security Council nonetheless.

Unusual as this latest move is, it is not the first attempt that the Kenyan political elite have made to circumvent the ICC. On the contrary, it fits a pattern that began with a motion passed by the Kenyan parliament in 2010 calling for the country’s withdrawal from the Rome Statute. After that motion failed to bear practical fruit, Kenya rallied for African Union (AU) support for an Article 16 deferral. While the AU endorsed such a move, it was ultimately rejected by the UN Security Council because the ICC’s investigation posed no threat to Kenya’s peace and security.

It hardly seems a coincidence, then, that Kenya’s latest gambit in New York comes just ahead of an AU summit that will celebrate the golden jubilee of its predecessor, the Organization of African Unity. It is arguable that Kenya, as in 2011, is testing the waters at the UN and will again seek to politicize the ICC amongst African states.

As vigorous as these attempts are to circumvent the rule of law, this latest attempt, the first under the tenure of the new Kenyatta-Ruto government, appears to be one that clutches at political straws.  The spurious request to the Security Council has been made all the more suspect by virtue of the fact that Ruto almost immediately distanced himself from it, as did Kenya’s attorney general.  Kenyatta, however, has yet to follow suit and the absence of any comment from him is conspicuous to say the least.  If the letter does not represent government policy, Kenya’s UN envoy hasn’t received that message””the letter has not been withdrawn and he has made further attempts to gain an audience with the Security Council to discuss the request.

Whether it was made at the behest of the Kenyan government or on the initiative of its UN representative alone, this latest moves represents something far more troublesome than Kenya’s past attempts at skirting justice: a blurring of the lines between the accused and the state. By using the weight of the government to argue its case before the Security Council based on some vague, illusory threat that amounts to an extra-judicial request for impunity, Kenya’s political elite is seeking to frame the ICC as having put the entire Kenyan state in the dock, rather than select individuals alleged to be responsible for the worst of the crimes committed during the post-election violence.

In principle, it should be easy to dismiss the request as being without merit and the UN Security Council should not simply ignore it, but reject it outright, and in doing so articulate that impunity is the real threat to peace and security.  African government leaders should also avoid supporting this effort, recognizing that it would benefit no one but the accused, who are already afforded the right to a fair trial before independent judges of the ICC””indeed, Kenyatta and Ruto already seem very confident that the evidence against them is weak and their exoneration assured, an opinion also shared, it would seem, by the Ambassador Kamau.

What is particularly tragic though about these attempts to elude the ICC, from Kenya’s first effort to this latest, is the absence of any recognition of the plight of the victims of the post-election violence””the families of the some 1,300 killed and over half-million displaced””let alone the numerous victims of sexual and gender violence who to this day have yet to receive any form of redress or restitution and who would have been left voiceless but for the tireless efforts of Kenya’s civil society groups.  It is clear that these efforts are not being taken in their name, and the request to the Security Council signals that they have in effect been abandoned.

In a 2011 address to ICC states parties, President Ian Khama of Botswana remarked that “the irony of the situation is that these [Rome Statute] crimes are perpetrated, in most cases, by the very leaders who are supposed to protect these people. The question is, for how long should any victim be subjected to indignity and suffering while the perpetrator of the crime enjoys the protection of power?”

The victims of Kenya’s post-election violence have suffered long enough.