Africa Emerges – but from what and into what? A triumph of hope over experience in Robert Rotberg’s new assessment of the continent – By Keith Somerville 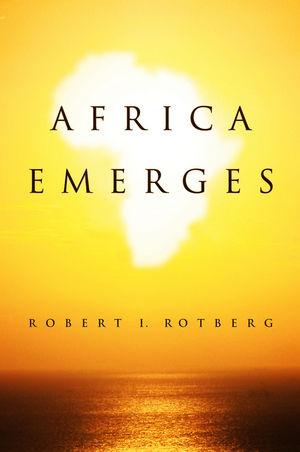 “Propelled to some extent by significant drivers of economic uplift such as the dramatic spread of mobile telephone capabilities and China’s pulsating appetite for African resources, sub-Saharan Africa, almost for the first time in more than 60 years, has a golden interlude in which it and its peoples can take advantage of abundant new opportunities”. This is a fine and lofty start to a book by an academic with an established reputation as a researcher and commentator on the continent. Components of this golden interlude, it seems, are the “startling improvements in child mortality”, the decline in dictatorships and the drop in deaths from civil conflicts, which mean that Africa is no longer the basket-case of the world. But the basket-case, dark continent approach to Africa was always questionable and selective, so from the beginning I was inclined to ask from what Africa is emerging and into what? While reviewing this book, I began to wonder if Rotberg’s Africa exists in a parallel universe where the seemingly endless war and suffering in eastern DR Congo, the swirling conflicts across Central Africa, and the continuing, crushing poverty afflicting most ordinary Africans do not exist.

Further into the book, I found sourced and well-set out accounts of many of the problems and prospects facing Africa. The author discusses very real, positive developments and the constant striving of ordinary Africans for a better life, as well as some of the negative factors that threaten the progress of economies. In particular, I found Rotberg’s discussion of the development of African-originated answers to the questions of how to develop strongly-rooted systems of accountable and responsive government and how to overcome Africa’s deepening dependence on exports of primary or semi-processed commodities compelling. These parts are interesting and informative but are marred by concluding sections in most chapters that, I’m sure with the best of intentions, accentuate the positives unrealistically and gloss over the continuing, major structural problems facing African peoples. There are rose-tinted references to the development of democracy in countries like Ghana (where the courts are deliberating on whether the last elections were a massive fraud) and Namibia (SWAPO is perhaps not the best model for democratic development). There seems to be a naí¯ve acceptance that holding elections once every four or five years is a measure of real accountability, and a naí¯ve belief in the self-serving opinions of Tony Blair about Africa’s progress, the credit for which Blair rather apportions to himself on an undeserved basis.

There are too many conclusions that claim progress that remains less than certain and may, like periods of African growth in the past, be the result of temporary surges in commodity demand and prices that mean a rise in export income but no deep or lasting development of the economies as a whole. The author’s examination of China’s role in Africa, for example, skates over the trade imbalances, the dumping of cheap manufactures that destroy local industries and the use of Chinese rather than local labour.

When lauding growth in many states’ GDPs in recent years, too little account is taken of how much of that growth is solely attributable to primary commodities and how little to domestic agricultural or industrial production, how weak the tax bases of most countries are and how a drop in prices could lead to another crash. There is no reference to Rick Rowden’s recent work, which points out that export-led growth does not mean wider economic growth, rising employment opportunities or sustainable development. Rotberg would have done well to reference works like this to temper the insupportable optimism that he exhibits. Too often possibilities for development are made out to be real progress with phrases like “may be able to make major transformations” – but how and when is not then detailed or supported by credible evidence. Hope is good but it needs to be supported by collateral. There are also occasional flights of fancy that verge on the ridiculous and stereotypical. Africa does have wildlife that lives in such close proximity to humans that it can damage crops or threaten livestock, but Africa’s agricultural problems are not seriously worsened when “elephants trample village gardens and lions and leopards take cattle” (p.43) – these may cause localized want, but are not serious obstacles to development.

When it comes to conflict and governance, the book has a worrying tendency to reduce too much to the whims and evil agency of leaders and the failure of Africa to measure up to the demands of Eurocentric, post-Westphalian, Weberian nation-state concept. This level of analysis is not helpful and takes little account of the interplay between structure and agency in Africa – with one channeling the other but in turn being altered by the flow of agency and events. Instead, there is the simple answer that Africa’s problems are not to be blamed on colonial legacies, inappropriate borders, conflict between peoples, competition for resources or avarice of elites but on “the failure of the modern nation-state in Africa” (p. 70). But why did the nation-state fail? This is not adequately addressed nor is there real attention to the importance of other, less formal models in Africa. He lauds governance in Botswana without explaining why this has been successful. He also totally ignores important developments such as the grassroots, indigenous construction (free from most external influence) of accountable but not Western-style forms of government in Somaliland or the success of power-sharing as a means of curtailing conflict in Burundi.

The author quite reasonably holds up Nelson Mandela and Seretse Khama – both estimable men worthy of emulation – as leaders who could provide the models for future politicians. In so doing, however, he does not say how and why they were successful as icons of leadership and he ignores the sadly short-lived “rainbow nation” euphoria in South Africa and the growth of corruption during Mandela’s period in office. While Mandela was an international statesman, apostle of reconciliation and globally admired force for unity and forgiveness, the Mbeki-run administration became more distant and unaccountable, corrupt and self-serving under his rule. The book concludes with the bizarre thought that “It may not be fanciful to envisage schools for political leaders capable of building the kinds of capacities that are now in short supply. Successful former leaders from Botswana, say, could instruct, as could those responsible leaders who may have served in many countries as vice presidents or cabinet ministers” (p.215). Surely, good political leaders, like Mandela and Khama, emerge not from some leader factory (and who decides on the blueprint for the ideal leader?) but from the people of the countries they govern. Leaders do not and should not achieve office through graduation from some sort of political polytechnic. Besides, can you see Goodluck Jonathan or Salva Kiir sitting and being lectured on integrity and democracy by Festus Mogae or Gaositwe Chiepe? This flight of fancy is redolent of a “one-size fits all” approach to Africa and it exposes the lack of detailed differentiation of the progress in some areas and the decline in others – such as the failure of Nigeria to surmount the problems of disunity, violence and corruption, the inability of Zimbabweans to rid themselves of the curse of Mugabe and the continuing decline of South Africa into corruption, incompetence and unaccountability.

Keith Somerville is a Senior Research fellow at the Institute of Commonwealth Studies, University of London; teaches in the School of Politics and International Relations at the University of Kent; and runs the Africa – News and Analysis website (www.africajournalismtheworld.com).

Why William Ruto must go to The ...