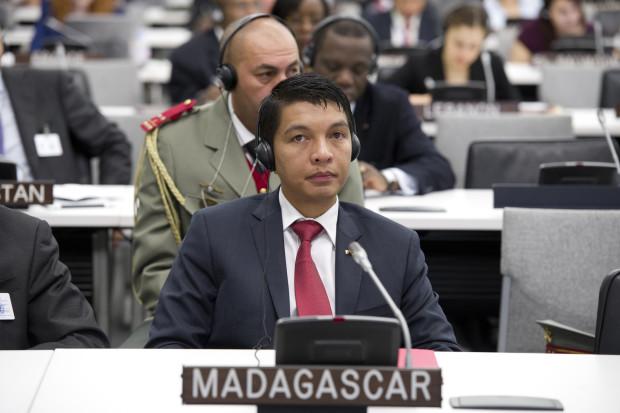 Finally, Madagascar voted.  October 25th marked the first election since the devastating 2009 coup froze the island’s political and economic growth.  For the last four and a half years, the Malagasy people have been mired in economic stagnation and political uncertainty.  The first round vote has been hailed as a “free, transparent, and credible,” (UN) election that “reflects the will of the people” (SADC).  These pronouncements, which came almost immediately after polls closed, offer a hopeful view of the country’s prospects.  The overwhelming theme of the initial post-vote news cycle has been: “The Malagasy people have finally brought democracy back to Madagascar.”

The first test of these optimistic pronouncements will be the lead up to the second round of voting on December 20th, when the presidential runoff and the parliamentary election take place.

The long-overdue election functions, substantially, as an attempt to bring Madagascar back into the international community.  Already one of the poorest countries in the world, Madagascar was further isolated and foreign aid disappeared in 2009 when 34 year-old radio disc jockey Andry Rajoelina, with the help of the military, toppled dairy magnate Marc Ravalomanana in a coup d’état.

Virtually no progress was made for four years with the economy contracting severely.  Political and economic progress has limped along since.  A new rugby stadium is one of the only tangible accomplishments of the “transitional” regime led by Andry Rajoelina, who is now close to completing a full electoral mandate.

There is, however, genuine cause for optimism in the wake of the recent election.  Madagascar’s first post-coup vote went much more smoothly than many observers expected.  There was limited violence, and a relatively low number of irregularities have thus far been cited.  Contestations of local results have also been handled at the independent election commission’s (CENIT) offices, precisely as planned.

As international praise pours in, so too may international aid””a critical lynchpin of development and state budgeting for the deeply impoverished island.  Donors are eager to come back and disburse long overdue payments slated for projects canceled during the crisis.

In spite of these positive signs, there are still troubling facts that are being largely ignored””both about the election, and the potentially destabilizing dynamic set-up by the impending second round.

First, the election was not quite as flawless as one might imagine from headline news.  Roughly 4.7 million Malagasy citizens voted in the first round election and preliminary results (with 75% of precincts reporting) suggest a 60% turnout””a relatively high figure in regional terms.  Yet something doesn’t quite add up: Approximately 4.7 million Malagasies cast their votes, but Madagascar is home to more than 22 million people.

Admittedly, like many sub-Saharan African countries, Madagascar has a young demographic profile.  However, 2010 United Nations estimates suggest that as of 2010 (the latest available figures), there were about 10.5 million Malagasy of eligible voting age (18+).  That number has surely grown over the last three years, yet the electoral roll only contained 7.8 million names.  In other words, between two and three million people who should have been eligible to vote were likely denied the possibility because of severely flawed voter registration procedures.

It also means that the 60% turnout figure cited widely may be too high by nearly 20% – a difference that raises questions of the new precise nature of the government’s mandate.

Second, the vote counting procedure is painfully slow.  Full provisional results will not be announced until November 8th, two full weeks after the polls close.  There will be another delay before those results are certified. So far, that has not caused any problems.  Hopefully the population will be able to sustain its patience, but the stakes are much higher in the second round.

Higher stakes and slow vote tabulation could be a perilous mix.  While the goal of the first round was to whittle down the crowded field of 33 candidates””of varying seriousness and quality””to a much more manageable two person face-off, the aftermath of the second round has the potential for far more serious consequences.

This is because in a place like Madagascar, where politics is about personalities rather than policy, any candidate that does not clear the initial hurdle to the second round is virtually guaranteed to be courted by the two candidates that do clear it.  In other words, nobody is left out in the political wilderness, or put in appropriately Malagasy terms; a loss in the first round rarely requires the choice between buying a plane ticket to exile or a trip to jail.

The same cannot be said for the second round, when the winner typically attempts to completely neutralize the threat of the loser. Both of the last two presidents (Marc Ravalomanana and Didier Ratsiraka) were forced into exile once they left office.  The stakes are therefore high – when power is conferred, and the prospect of political death is on the table, tensions are sure to rise.

So, how has that historic dynamic played out this time around? Are tensions likely to be elevated heading into the December contest?  And if so, what perils might lurk ahead?

As Emilie Filou has written for African Arguments, it is quite remarkable that these elections are taking place at all – this is a testament to pressure applied by the international community and Malagasy electoral bodies, which managed to exclude three of the most popular candidates from participating.

Andry Rajoelina – the incumbent President of the [4+ Year] Transition –  was initially certified as a candidate before the long saga surrounding his potential eligibility was resolved when a court ruled, quite simply, that he submitted his paperwork late. His main rival and the man that he deposed, former President Ravalomanana, initially pledged not to run in a good faith agreement with Rajoelina.

While Rajoelina broke the pledge with his attempt to run, Ravalomanana broke its spirit, putting his wife’s name forward in his stead.  She was, however, also deemed ineligible by a court because she had not lived in Madagascar for the requisite six month period prior to elections””something she really couldn’t be blamed for as she was in forced exile with her husband in South Africa.  Didier Ratsiraka, the “Red Admiral” former president, was denied on similar grounds, as he had been in exile in France.

In the end, this meant that three of the most popular choices were not on the ballot.  This may have been an unavoidable necessity in smashing the roadblocks to democratic elections produced by bitter personal rivalries, but it is worth questioning the precedent for democratic procedure.

This is particularly the case with reference to Ravalomanana, who was forced out of power and into exile by a coup d’état.  Without strategic considerations of expediency, it would be difficult to justify his exclusion from the process in the spirit of democratic principles.  The same is true for Ratsiraka (Rajoelina’s exclusion is more justifiable because of his pathway to power).

Nevertheless, this is an important point to note, because each of the three candidates””and Ravalomanana and Rajoelina in particular””threw their weight behind a favored “proxy” candidate.  Supporters of each movement were told that a vote for these “proxies” would be a vote for the candidate they truly supported, Rajoelina or Ravalomanana.  Hery Rajaonarimampianina, the coup regime’s Minister of Finance and Budget, replaced Rajoelina.  Jean-Louis Robinson, a doctor-turned government minister and WHO official, replaced Ravalomanana.

Whilst the full results are yet to be released, it is virtually certain that these two candidates will face off in the second round and one of them will be the next president.  Robinson leads Rajoelina by a margin of 25% to 15%, figures that have held largely steady as votes trickle in.  This foreshadows a dynamic where the toppled former regime is battling on the ballot with the regime that orchestrated the coup.

Tensions around the second round are already elevated; this polarizing choice of candidates injects substantially more possible volatility.  For example, if Rajoelina cannot corral other parties into his camp and funnel their supporters to his side, he could be tempted to try to damage, delay, or delegitimize the second round vote.  Likewise, Ravalomanana’s movement could do the same, or call for large-scale protests””the same type of protests, ironically, that eventually led to Ravalomanana’s downfall in 2009.

These risks do not eclipse the optimism produced by a first round that proceeded better than was expected.  But to avoid these scenarios, the next steps must proceed with caution.  The risks of renewed volatility are real””particularly as the country copes with food shortages created by ravenous locusts, heavily militarized bandits in the south, desperate levels of poverty, and health challenges that now include even bubonic plague.

After waiting for more than four years, Madagascar has voted.  But the story is not over despite rosy media reports and congratulatory praise from electoral observers and the international community.  The Malagasy people vote again on December 20th and it remains uncertain whether the island’s fragile democratic transition can remain afloat, or if it will be sunk””along with hopes for peace and prosperity””in a high stakes game of pre- and post-electoral political brinksmanship.

Brian Klaas focuses on Madagascar politics, elections and political violence at the University of Oxford.