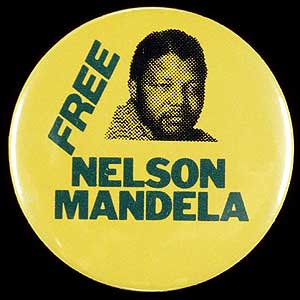 For more than twenty years, following his conviction and sentence to life imprisonment in 1964, the Apartheid government in South Africa banned pictures of Nelson Mandela and his fellow prisoners. This ban was so effective that in 1982, following a medical checkup in Cape Town, Mandela’s warders allowed him a stroll on a public beach, confident””correctly””that no-one would recognize him.  As told by his biographer William Gumede, “On the beach that day no-one as much as glanced at him. Later, with a glint in his eye, Mandela said he’d wondered what would have happened had he suddenly shouted: “˜I am Nelson Mandela!'”

Mandela’s anonymity was all the more ironic as, for over a decade, the African National Congress and the international Anti-Apartheid Movement had singled him out, from among all the other political prisoners in South Africa, as the symbol for its campaign. Images of his face from the Rivonia trial adorned posters and badges around the world, and in 1984 the song “Free Nelson Mandela” by the ska band The Specials helped to spark a movement by musicians, culminating in the “70th birthday concert” in 1988.

Mandela and his comrades were reluctant to give a single personal face to their mass movement. The ANC was run by a collective leadership in which individuals were required to submit to party discipline. It was profoundly averse to any personality cult. Nonetheless, at the insistence of the British Anti-Apartheid Movement which convinced the ANC that the global campaign against Apartheid needed a rallying symbol, they participated in constructing Mandela’s image to serve as an icon for their cause.

For the last twenty three years of his long life, Mandela had little privacy and no anonymity. Instantly recognized around the world, he became a vessel for many people’s hopes and aspirations, and a symbol of the new South Africa. For Africans, he exemplified leadership and dignity in overcoming racism and oppression: he was the leader they deserved. For white liberals, his forgiveness was a reward of which they could hardly have dreamed. Identities were projected onto him. When Mandela visited America after his release from prison, one young journalist prefaced her question with the words, “as an African American, do you…” before he gently reminded her that he was, in fact, an African. The way he has become idolized and idealized tells us more about the world’s need for such a figure, than about Nelson Mandela himself.

We need to tease apart the wishful thinking from the realities of this great man. In the days following his death, the South African Communist Party released a statement, which included the following:

At his arrest in August 1962, Nelson Mandela was not only a member of the then underground South African Communist Party, but was also a member of our Party’s Central Committee. .. After his release from prison in 1990, Comrade Madiba became a great and close friend of the communists till his last days.

The official ANC press statement confirmed this. It had indeed, long been alleged that Mandela’s repeated denials that he was a communist were a concealment of his true political affiliation. When Stephen Ellis published evidence of Mandela’s membership of the SACP central committee in 2012, it renewed this controversy.

The arguments over Mandela’s link to the SACP were, in important respects, irrelevant. He never denied his revolutionary ideals and methods. At the time of his arrest in 1962, and trial and conviction in 1964, Mandela reaffirmed the ANC’s tenets, and chose to make a political statement rather than plead not guilty or seek clemency. It was this clear enunciation of principle that defined his political imprisonment.

Mandela was also of course labeled as a “terrorist” and the U.S. government needed to make special exceptions for him to visit the United States after his release. He was only removed from the terrorist watch list in 2008. Some of his comrades, now leading South African political and business leaders, remain on the list, and only a few weeks ago, Mandela’s comrade Tokyo Sexwale was detained for questioning on arrival in New York.

Are these, as The Telegraph journalist would write, “murky” aspects of Mandela’s past, or central to understanding this man and his greatness?

The struggle to overthrow Apartheid was a revolutionary struggle, characterized by rigorous internal discipline that included, when required, secrecy and deception. Cadres of the ANC and SACP worked underground within South Africa and travelled clandestinely to the Soviet Union, Cuba and East Germany for military training. The ANC strategy had four pillars, one of which was violent armed struggle framed by the ethical parameters of a just war, constructed on the strategic imperative to capture and maintain the moral high ground as a means to isolate the regime and build a world-wide front against Apartheid. In 1985, the ANC committed itself to “people’s war,” spearheaded by its armed wing, Umkhonto we Sizwe, which carried out selective acts of “armed propaganda”. In parallel, massive unarmed confrontation, including strikes and stoppages, boycotts and massive demonstrations, posed a greater challenge to the Apartheid regime””showing that the people could not indefinitely be ruled against their will.

The historian of the ANC, Tom Lodge explains how MK’s “theatrical” violence helped animate the non-violent mass movement, demonstrating the vulnerability of the oppressor. But the central fact is that violent and non-violent elements of the revolutionary strategy were pursued by a united leadership with clear goals and strategies. The ANC leadership never wavered from its foundational objective of achieving a democratic non-racial South Africa, and regarded all else””such as the criminalization of Apartheid””as subject to negotiation. That leadership also was determined to avoid the dangers of “militarism”””i.e. the isolation of military activity from political guidance.

It was precisely such a cohesive and disciplined leadership, possessed of clarity in distinguishing its ultimate goals from its tactical calculations, that could seize the moment at which it could successfully negotiate an end to Apartheid. The ANC thereby achieved the democratic revolution it had sought since its foundation in 1912. Whether and how it should pursue the second stage of the revolution was the focus of an unresolved internal power struggle between African nationalists and the ANC left. But neither group within the party was prepared to break ranks””they knew that without unity, they were destined to fail.

The ANC’s own tribute to Mandela is instructive.

He loved the ANC. Hence his frequent words that upon his death he would join “the nearest branch of the ANC in heaven.” In his lifetime of struggle through the African National Congress, he assumed and was assigned various leadership positions. He served with distinction. He was part of the ANC leadership collective and did not make decisions without first reflecting with his comrades. Yet he would fight for the principle of what was the right thing to do.

On his release from prison in 1990, many ANC members feared that Mandela had “sold out” to the National Party government. His first speech was drafted collectively by the leadership, and represented positions unchanged from 26 years earlier. This indicated that despite his strong advocacy of pragmatism within the ANC’s internal debate, he would respect party discipline.

Detractors within and outside the ANC feared that the national democratic revolution in South Africa would entail too many political and economic compromises. But several strategic, political and contextual factors combined to drive the ANC leadership to make the historic compromise that led to the 1994 election.  Most importantly, the ANC only belatedly realized the extent to which the Apartheid state was, by 1988, functionally bankrupt, at the same time as it recognized that the Soviet Union was collapsing and that it would therefore need to work with, rather than against, the existing capitalist economy to sustain a post-Apartheid state. For the last two decades, this has meant that the economic structure of South Africa has remained fundamentally intact, merely welcoming an emergent black middle class into a highly unequal capitalist system. The challenge facing Mandela’s successors at the helm of government is how to generate sufficient growth to deliver on the promise of broad-based development.

Nonetheless, the peaceful transformation of South Africa during the 1990s was one of the most astonishing political achievements of our era. It is salutary to recall how terrifying were the predictions of bloodshed until the very eve of the April 1994 election.

One man did not change South Africa: it was the ANC and the mass mobilization of South Africans and ordinary people around the world that did so. Mandela recognized this and possessed the great gift of putting his idolization to service in the collective work of forging change. In recognizing Mandela’s true greatness, we should not lose sight of that greater cause. And his secret SACP affiliation compels us not to be too quick to project our own values on to him, and also reminds us that while so many South Africans live in poverty, suffering inequalities inherited from the past, his life’s work was unfinished.

As I watch the international media coverage of Nelson Mandela’s memorial service, I wonder how different are we today to the Cape Town beachgoers in 1982, who knew the icon but could not recognize the man?

Alex de Waal is Director of the World Peace Foundation. This piece was previously published on WPF’s blog ‘Reinventing Peace’.

Angola: Crocodiles, protests and the rule of ...

The Democratic Republic of Congo: Between hope ...