Incompetent, under-resourced and uninformed – the international response to crisis in the CAR 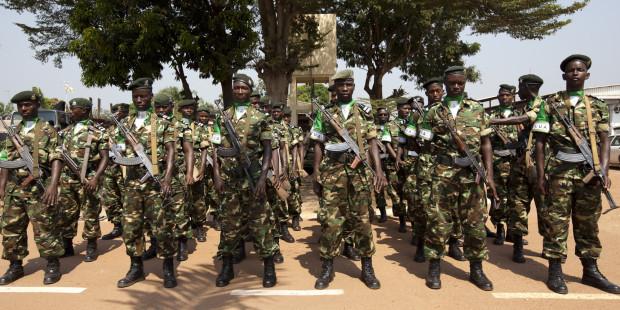 MISCA troops deployed in the CAR.

Earlier this week I interviewed Donatella Rovera, Amnesty International’s senior investigator in crisis response. She has just returned from a week in the Central African Republic (CAR). We spoke about the current international military and humanitarian response to the crisis in the CAR and events unfolding in the country.

MT: Can you explain why the response to the current crisis in the Car does not seem to be very effective?

DR:  Events unfolded very, very quickly and the major problem [with] the response that was that it didn’t really keep pace with events on the ground…it was incredibly frustrating when I got there to see how the international community – the UN agencies and international NGOs – were reacting, or rather not reacting. They were looking at events that were happening in January still within the framework of what was happening last December.”

MT: And what was the main difference?

DR: Last December things came to a head whereby the former regime, the predominantly Muslim Seleka forces, were committing widespread abuses against the population in general, and obviously most of the population is Christian. And then there was this kind of “˜spike of madness’ on 5th and 6th December when about 1000 people were killed in the space of those 2 days in the capital…most of them were Christians – [killed] by the Seleka.

It was very clear at that point, or very shortly after that – within a few days – that the Seleka regime was crumbling and the Muslims were going to be made to pay the price and that it was going to be a very different ballgame because they are a small minority.

MT: Do you think at that point there should have been pre-emptive action to protect civilians?

DR: I think if at that point the situation had been understood then there would have been a better chance for an adequate response for what was going to come. That was not the case – even when I got there in the middle of January it was quite clear that people were still looking at things in an outdated manner.

MT: Is there a lack of capacity in international agencies and the AU/French military intervention?

DR: There are 2 things. You’ve got the military presence, and the military (which includes international peacekeepers) they are there to deal with a particular situation, which was the former Seleka regime, but then things changed on the ground very quickly they did not understand what was going on and adjust what they were doing to with deal with new challenges and the new threat.

And as for the rest of the international community – if you like the UN agencies and so on, I think in that time there was a high turnover of staff, so there were a lot of new people turning up, staying 2 weeks or a week and really not understanding what was happening.

MT: And most people are still deployed in Bangui, are they? They’re not in other parts of the country – the North West?

MT: Is that the French troops?

DR: The French were only really around in the capital and a little further north west (but not very far). And they were not where things were happening. They tended to get to places after events had happened.

MT: Are the MISCA contingent effective?

DR: Neither have been very effective – French nor African Union. For 2 reasons: mainly because they weren’t present where things were happening, when they could have made a difference, when they could have stopped some of the massacres…In the places where they were present they did manage to stop some of the large-scale killing, but the problem was that they were just not present and they did not seem to be very willing to confront the new actor…It was only around 9th/10th February that the commander of the French forces said that the Anti-balaka are the “˜enemies of peace’ and so on…that was very late as a realisation.

MT: Is the mandate of the AU and French troops sufficiently strong?

DR: They have a very strong mandate – they have a mandate to protect civilians and to disarm…of course they went in to disarm the Seleka, but they didn’t do a very good job – many Seleka are still armed. Those that are, in so far as I could see, have better weapons than the Anti-balaka. But the problem is because the targets are civilians, they are completely defenceless, the fact that the Anti-balaka are not well armed does not make that much difference – they have managed to killed many people and scared many into leaving the country.

MT: Would you say that the deployment of AU MISCA forces has been particularly slow and are they sufficiently well-resourced?

DR: Obviously the resources were not all there and that’s a debate that needs to be had, but I’ve worked in wars for over 20 years and I’m yet to find one where it is felt there are enough resources, whether human or material…but there is also the other issue of how they have been used.

MT: Would you say that it has been particularly bad in this case?

I saw in so many cases international forces and Anti-balaka militia and road blocks 50m, 100m away. That should not have been allowed. Now, quite apart from the results of this lack of action – the killing and forcing of Muslims out of the country – it has also allowed the Anti-balaka militia to kind of crystalise their rule. And with every passing day it is also being realised that it will be much more difficult to shift them.

MT: Who is actually commanding the Anti-balaka?

DR: With all the bad press – for example, our report and some foreign journalists seeing what they were doing, there have been some men who have put themselves forward presenting themselves as would-be leaders of the Anti-balaka movement. But there is no single leadership. They are very cohesive at the level of their discourse and in terms of the methods they employ, but they are not a coordinated, cohesive force by any means. Local dynamics have developed such as rural versus urban – so you have a lot of young men from rural areas who have gone into the town and joined the Anti-balaka for criminal purposes – much more than the ideological drive.

In some places where the Muslim population has been forced out completely the Anti-balaka have moved on to the next stage – they are now asking for money from Christians.

MT: So is this then a religious conflict?

DR: It has certainly expressed itself in ethnic-religious terms. The discourse from any Anti-balaka and Christians that support them is that the Muslims are all foreigners – they’re all Chadians, they don’t belong in this country and they should leave. So Muslims are paying the price for what the Seleka did – all Muslims are being labelled as foreigners and the Anti-balaka are saying very clearly that they don’t want any Muslims, they must leave, and there is no space for them. There is also the element of class resentment; the Muslims were often merchants – the ones who were better off.

MT: So how wrong were the people who initially labelled this as “˜genocide’?

DR: Genocide is not the right term…but ethnic cleansing yes – a community is being targeted for physical liquidation by being forced out of a particular area – the definition is absolutely spot on for this case. And the discourse of those that are committing these crimes – they are not hiding these crimes, they are saying it very openly, very publicly, very systematically…and it’s not just rhetoric – the action they take is to implement the rhetoric. So it’s a very clear cut case in that respect.

MT: Is it “˜the community’ that forces out the Muslims or, to a greater extent an external force coming in?

In a few towns, talking to the priests who were sheltering the Muslims, they said that if they only had to deal with the local Anti-balaka it would be a little easier, but there are all these guys that come from outside…but in terms of a coherent decision that the Muslims have to leave, that has been very clear from all. And by a lot of the Christian population.

MT: Do you think permanent demographic changes have now taken place in the CAR?

DR: In the near future it is very difficult to see people coming back. That is the main difference with what was happening last year – you had Christian populations not sleeping at home, but then coming back to check on their property in the day, or going to shelter in the church – not going far, staying in their towns, which means that going back is not too far-fetched, it was also never a possibility that the majority of the population would be kicked out of the country…now it’s a very different story…people have been kicked out not just from their towns, but out of the country and their property looted and destroyed.

MT: Do you think the international response been ineffective because the CAR is essentially strategically unimportant place?

DR: Yes, but I also think that there has been a lot of incompetence…I see no objective reason for this, some of it is plain incompetence. I spoke to people who should have known what they were talking about and they did not

The military effort belonged to the AU and French and there have been huge coordination problems…But the Chadian army did what others didn’t do – first, they escorted Seleka war criminals around the country. But they were also the only ones that really saved lives because ultimately it has only really been the Chadians who have escorted convoys of desperate Muslims wanting to get out of the country…probably for their own (Chad’s) political gain. The Chadians solved the problem by providing lorries and armed escorts – sometimes not in a very good way, by shooting their way out of places and committing abuses.

In other places people took things in their own hands – there was a convoy of vehicles, not UN vehicles, but paid for by the UN to bring in food from Cameroon and then go back empty…The lorries were boarded by many desperate Muslims. Some lorry drivers made them pay, which was very embarrassing, but the lorry drivers were not employees of the UN. But their job (bringing the food) was done. Both sides saw an opportunity.

There has been a clear problem of coordination within the AU forces and between the AU forces and the French…there needs to be better use of the forces, they need to be moving to where they are needed, as opposed to setting up camp…they need to be much more proactive at moving about. Quite clearly we’d like to see this turning into a UN peacekeeping force because you will have better resources and the things that this quite clearly has not had.

Choosing to be a Dinka: selecting ethnicity ...