After Minova: Can War Crimes Trials Overcome Violence in the DRC? – By Millie Lake 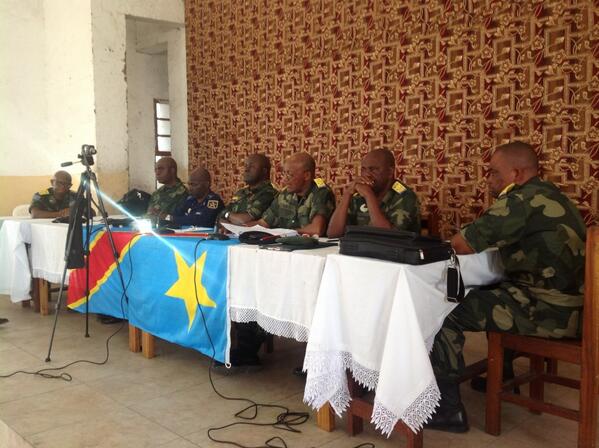 On 20th November, 2012, over 130 women and girls in eastern DR Congo were raped and sexually assaulted by members of the Congolese armed forces. The incident occurred after hundreds of soldiers from the national army were driven out of the provincial capital of Goma by the M23 rebel group. Humiliated by military defeat, soldiers arrived en masse in the nearby town of Minova, where they engaged in systematic looting, pillaging and raping of local civilians.

This week a military court in Goma, North Kivu, handed down a long-awaited judgment against 39 of the soldiers implicated in the case. The decision delivered by North Kivu’s operational military court was remarkable in a number of ways. First, it was one of only very few judgments of its kind worldwide in which a domestic court has invoked the Rome Statute of the International Criminal Court to prosecute rape as an international crime. Second, this legally complex and potentially groundbreaking war crimes trial emerged from one of the most dilapidated legal systems in the world, in a country lacking in the most basic infrastructure.

The case raises a number of important questions. How and why are complex human rights decisions produced in environments of extreme state weakness and ongoing conflict? And what does their existence mean for overcoming violence and building the rule of law?

To answer these questions, it is necessary to look at the broader socio-political landscape from which DR Congo’s war crimes trials have emerged. In 2006, Congolese courts became the first domestic courts in the world to invoke the Rome Statute of the International Criminal Court to prosecute sexual violence as an international crime. Since then, gender-based crimes have been widely prosecuted in both military and civilian jurisdictions, far outnumbering prosecutions for any other category of crime. In 2012, over 70 percent of the inmates detained in North Kivu’s central prison were implicated in sexual offenses of some nature, while other categories of crimes remain notoriously difficult to prosecute. Indeed, local courts have become so effective at prosecuting sexual violence cases that some women feel incentivized to falsely identify as rape victims in order to pursue material compensation or other perceived social benefits.

In addition to the frequency with which domestic courts have ruled on gender violence, protections afforded to victims and witnesses testifying in court have also been fairly sophisticated. In spite of extremely limited infrastructure, witnesses in military trials are usually dressed head to toe in black to protect their identity and are often offered the opportunity to testify using a microphone from an adjoining area to avoid further trauma. The protection afforded to vulnerable witnesses is especially impressive given that courtrooms in eastern DR Congo, where they exist at all, typically lack electricity. This means that arrangements must be made to transport the relevant technology, including a generator, to the courtroom, requiring both commitment and creativity from justice sector personnel. Legal systems around the world boasting far stronger infrastructure and resources frequently fail to honor these basic rights.

Building the rule of law has long been viewed as central to the process of ending conflict and consolidating statehood. International organizations and foreign donors have invested billions of dollars to these ends, in contexts as diverse as the Balkans, Cambodia, East Timor, Guatemala, Peru and Rwanda. The result is that local and international trials for grave human rights abuses – particularly those involving genocide, war crimes and crimes against humanity – have been increasingly common, even in contexts of extreme state fragility and ongoing conflict.

In DR Congo, these types of trials have been made possible by the work of legal capacity building projects pioneered by a coalition of foreign and domestic stakeholders including the American Bar Association’s Rule of Law Initiative, Avocats sans Frontií¨res, the United Nations Development Program’s Access to Justice Project, the United Nations Mission in DR Congo (MONUSCO) and the Congolese justice sector. Under a “˜mobile court’ program, international donors partner with domestic stakeholders to transport local lawyers, judges, prosecutors, magistrates and defense counsel from the provincial capitals to remote rural locations that have had little prior exposure to formal justice sector institutions. There, makeshift mobile courts carry out investigations and deliver justice to victims and perpetrators of military and civilian violence.

However, despite notable successes in some areas, apparent human rights victories like those observed in Minova should be approached with some caution. While the legal system in eastern DR Congo has frequently been criticized for being too gender-sensitive (either by displacing other categories of crimes or convicting defendants with insufficient evidence) the Minova trial failed to deliver justice to the vast majority of victims brought to testify. Of the 39 defendants, only two received life sentences for the war crimes of rape and murder, one received a life sentence for rape in violation of the military penal code, one received a five-year sentence for stealing a motorcycle, and a remaining 22 received sentences ranging from between ten and twenty years for pillaging and disobeying orders. Importantly, only one of fourteen implicated officers was convicted, the remaining thirteen acquitted.

Why the Minova trial fell short of providing justice for the Minova rapes highlights a set of broader challenges facing the Congolese justice system. The trial demonstrates that rather than providing an impartial venue for pursuing legal accountability, human rights trials in eastern DR Congo are inherently political processes. Although the legal system has a strong track record of securing rape convictions, this track record was immediately overturned when higher-ranking officers were among the accused. Too often, criminal trials offer spaces where deals and negotiations between local elites may be struck, and junior officers can be targeted while their superiors evade responsibility.

The failure to hold high-ranking officials responsible for the actions of their troops in conflict can, in part, be attributed to an unfortunate feature of Congolese law that forbids military officers from being judged by officers of inferior rank. This provision makes it notoriously difficult to hold any colonels or generals legally accountable for their criminal actions through the domestic justice system. Yet in practice other factors persist.

In the ground-breaking case against Lieutenant Colonel Kibibi and ten of his troops for mass rape in Fizi, South Kivu, in 2011, a criminal prosecution was permitted to proceed through the courts. The trial was hailed as a major human rights victory. In just six weeks, a full investigation and trial had been carried out, resulting in a twenty-year sentence currently being served out by Lt. Kibibi in Kinshasa. In contrast, a similarly grave mass rape that took place in South Kivu just five months later, involving Colonel Alexis Kifaru, was never permitted to move through the justice system. The case was obstructed in spite of the fact that military prosecutors had procured a great deal of evidence for the case and Kifaru was briefly detained in UN custody. Close ties between Col. Kifaru and elites in the Congolese military command structure protected the colonel from prosecution, whereas Kibibi, who had reportedly fallen out of favour with his superiors, was perceived to have been handed over to military prosecutors by the Congolese army as a “sacrificial lamb” intended to evidence the commitment of the armed forces to promoting human rights and gender justice.

Similar dynamics can be observed in this week’s Minova verdict. Stories like those involving Kibibi and Kifaru make it clear that, even if legal and logistical challenges could be overcome, criminal prosecutions in environments of ongoing violence are necessarily shaped by conflicts between different factions and elites. When behind the scenes negotiations determine which cases get to trial, which mysteriously disappear from the system, and who can bear legal responsibility for acts of violence, criminal trials like those in Minova will only be able to go so far towards building a culture of legal accountability and the rule of law. Logistical, legal, financial and technological support have proved critical in training Congolese lawyers and judges; equipping the justice system with tools to carry out day-to-day functions; and contributing to a reduced societal tolerance for rape. Yet, thus far, international stakeholders have proved unable to overcome powerful inter and intra-group alliances that shape who faces trial and who continues to evade justice. As a result, the landscape of violence in eastern DR Congo continues to be characterized by unchecked impunity.

Milli Lake is a final year PhD candidate in Political Science at the University of Washington in Seattle. She has done extensive fieldwork in the Democratic Republic of the Congo and other places.

This post is also published on Christoph Vogel’s blog