Addis dispatches: at the IGAD peace talks for South Sudan 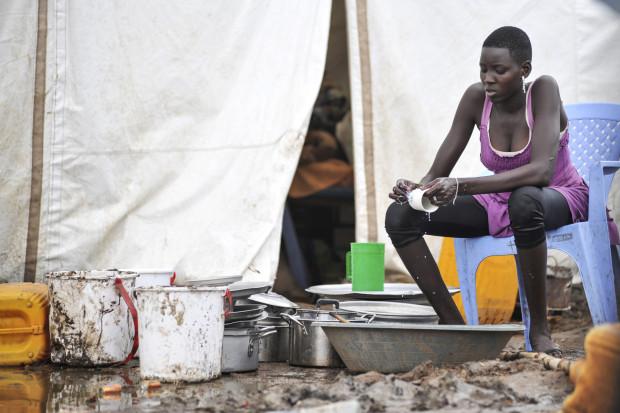 Whilst peace negotiations continue behind schedule, thousands of South Sudanese continue to live in IDP camp across the country.

The excuse was laughable, if tragic. Explaining that the “˜banks are closed’ for the Eid-al-Fitr and Martyrs’ Day holidays, the government of South Sudan delegation stated it was unable to travel to Addis Ababa on 30 July. Talks were due to resume the next day. Memo to the government delegates: all the big hotels in Addis take Visa. Students behind on their homework have evolved more sophisticated excuses. But this outrageous behaviour seems largely the result of government incompetence and miscommunication rather than a calculated policy. Incompetence or not, the government faces no apparent political cost for this latest unjustified delay.

It doesn’t seem unreasonable to say that when your country is in flames, no one gets to take holidays, let alone the delegation empowered to end the crisis. One doubts the hundreds of thousands of refugees and internally displaced persons or the millions on the brink of famine felt in much of a holiday mood.

Obsessing over process, not substance

The last round of talks adjourned on 23 June after the mediation was unable to overcome the SPLM/A (In Opposition)’s principal objections: what it deemed the flawed representation of other parties to the talks – civil society, political parties and faith based organisations – and concern over the procedures for decision-making. During the adjournment, the mediation worked to correct representation, and added further civil society, political party and faith representatives to the talks. Importantly, the mediation won a commitment from Riek Machar to accept to participate in multi-party talks if the representation issue was corrected.

Talks therefore resumed on 4 August with the expectation that the revised representation of the non-SPLM groups would mean the opposition would come to the table. They attended the opening, but refused to participate the next day. Instead of engaging with the agenda, agreeing to the mediators’ proposals for the format and structure of future negotiations and beginning to make substantive progress, the latest round of talks has again bogged down in procedural matters.

Continuing its objections despite the amendments to representation reveals the SPLM/A (IO)’s true reason for discontent with a multi-party process: it objects to the participation of the so-called Group of 10, also known as the former SPLM detainees. The SPLM/A (IO)’s position suits the government just fine: both would be happy to return to a process that involves only a narrower elite, which can ignore the inconvenience of broader participation and new ideas. It would also likely mean a deal in which both sides escape any real measures of accountability.

Missing the August 10 deadline: then what?

When the sixty-day deadline to complete formation of a transitional government of national unity was agreed on the side-lines of the Assembly of the IGAD Heads of State and Government on June 10, it was already an ambitious target.

At the time, it was hoped setting a deadline would push the parties to move faster and commit them to a defined timeline for action. That gambit has not paid off. Missing the deadline would matter less if some substantive progress had been made: with days to go even that latter aim seems unlikely.

The region faces four choices in the coming week: one, either pressure the government and SPLM/A (IO) to rush to an imperfect agreement by the deadline, and therefore one that they are unlikely to believe in, let alone implement; two, overlook the missed deadline and allow the parties more time to negotiate further; three, attempt punitive measures to induce the parties to end their intransigence; four, attempt to cut a deal outside of the Addis process, one that will almost certainly prioritize power sharing between Kiir and Machar at the expense of everyone else.  None of the options are particularly good.

The May 9 Agreement had transformative potential: by including the former detainees, political parties and civil society, a broader and more far-reaching dialogue became possible in the Addis process. So far, the participation of civil society in the negotiations has only been notable for its internecine feuding. Far from contributing ideas and arguing for a better South Sudan, the obsession has been to compete to achieve “˜representation.’

Get to the table in Addis! That is what matters! What one should do when at the table seems a distant consideration. So far, the most substantive contributions from civil society have come from those who haven’t even attended the talks. The promise of an inclusive process has been sorely disappointed. Civil society delegates have one more chance to prove that their attendance and participation can be meaningful: this attempt at inclusivity may not survive another failure of process, if the SPLM/A (IO) and government delegations don’t kill the concept of inclusivity first.