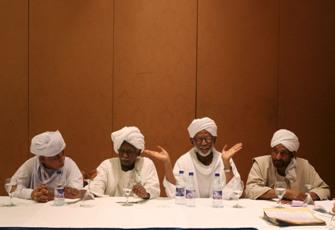 On February 4, 2015 the mainstream opposition coalition in Sudan, the National Consensus Forces (NCF), launched a campaign for what it called the “effective boycott” of the general elections slated for April. The launch of the campaign followed the signing of the Sudan Call declaration in which the NCF, the armed rebels alliance Sudan Revolutionary Forces and the Confederation of Civil Society Organizations (CCSO) called for the dismantling of the ruling National Congress Party’s (NCP) regime, to be replaced by a democratic state in which all citizens would be equal.

In the wake of the signing of the Sudan Call on 3 December 2014, the government immediately detained NCF chairman Farouk Abu Issa and the head of the CCSO Amin Makki Madani. Neither has yet been released.

Meanwhile, on 4 January 2015, the NCP-dominated parliament passed constitutional amendments giving the president the power to appoint and relieve state governors as well as transforming the militias of the National Intelligence and Security Services, including the notorious Rapid Support Forces, into regular forces. These amendments constitute a major political step backwards as even more powers are now concentrated in the presidency and in Khartoum, further entrenching the problem of centralized and authoritarian governance in Sudan.

And the widespread scepticism surrounding the “˜National Dialogue’ initiative launched by President Bashir on 17 January 2014 continues to be vindicated. The government persists in preparing for the elections despite the fact that almost all opposition groups have refused to participate.

The exceptions are Hassan Al-Turabi’s Popular Congress Party, which accepted the invitation for national dialogue in what appears to be a rapprochement between Islamists, and the Democratic Unionist Party faction of Mohammed Osman Al-Mirghani, which is already part of the government.

Even the NCP’s ideological kin, the Just Peace Forum of Al-Tayyib Mustafa and the Reform Now party of Ghazi Salah al-Din Al-Attabani, recently suspended their participation in the National Dialogue, citing dissatisfaction with the inconducive political environment, including the detention of political activists and the lack of freedom to hold events outside the premises of political parties. But the two parties are unlikely to join the signatories of the Sudan Call. Ghazi Salah al-Din is privately critical of the Sudan Call, believing it created divisions in the ranks of opposition.

As the government continues to restrict the activities of political parties, curtail press freedom (the government security apparatus confiscated print copies of newspapers more than 52 times in 2014) and detain political opponents, it has become abundantly clear that the NCP only launched the National Dialogue in response to the pressure it came under following the September 2013 protests, and as a time-buying tactic in order to get to the elections, craving an electoral legitimacy, no matter how contrived.

But it is hard to see how the opposition’s decision to boycott the elections will lead to any result other than a repetition of past mistakes.

According to its organizers, the “depart” or “Irhal” campaign of the “Sudan Call” Force involves the collection of signatures from citizens in the centre, other regions and “internet websites” calling for the departure of the regime, as well as holding rallies in around 20 of the country’s cities.

All of this feels like a déjí  vu. When the opposition boycotted the 2010 elections, the same arguments and justifications were cited. And nothing was gained.

The argument for boycotting the elections on the grounds of not lending electoral legitimacy to the NCP regime is ironic, coming as it does from political parties who are officially registered and regulated under the political parties’ act of 2007. Operating under the state’s regulations effectively means recognizing the legitimacy of NCP, for there is a total conflation between the two.

The NCP has the de facto legitimacy that the outside world will continue to recognize even if it believes the elections were a charade. And those arguing that the Sudan Call alliance would eke out concessions from the NCP, are clearly oblivious to stark realities and the lessons of previous experiences. The NCP has no reason to offer any meaningful concessions to opposition parties because it rightly views them as weak opponents.

And if past experience is anything to go by, alliances between the political opposition and armed groups on the basis of the lowest common denominator, i.e. shared opposition to the NCP, tend to unravel once the strongest member of the alliance enters into bilateral talks with NCP. What happened to the National Democratic Forces of the 1990s and early 2000s after the Sudan People’s Liberation Movement (SPLM) entered bilateral talks with the NCP provides a perfect case in point.

From the viewpoint of the political class, this reality of imbalance can only be countered by a robust alliance between the opposition, rebel groups and civil society. But the way forward lies in confronting this imbalance where it actually exists: on the ground.

Therefore the elections, no matter how flawed they’re going to be, presented an opportunity for the opposition to exploit its semblance of freedom to operate and mobilize among the masses during the electioneering period, where they should be legally able to hold rallies outside of their premises.  Holding rallies calling for the boycott of elections will simply give the NCP more of a legal reason to crack down on them.

There is serious discontent among Sudanese commoners due to the NCP’s pro-rich economic policies and vast expenditure on defense and security at the expense of health and education. Not to mention its continued wars against the marginalized people of the peripheries in Darfur, Blue Nile and South Kordofan, who do not fit into the unilateral narrative of “Arabic and Islamic culture” that the NCP has relentlessly forced upon the people of Sudan.

But by boycotting the elections for the second time, the opposition has doomed itself to a state of accumulative inaction that might last for another five years, further alienating it from the commoners it is supposed to reach out to. As one friend commented on this decision to boycott: “The opposition will never win a battle it refuses to fight.”