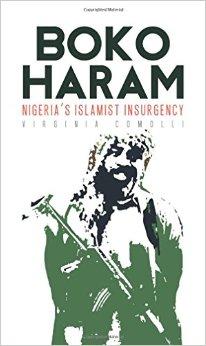 “Nigerian civilians find themselves stuck between two brutal opponents – Boko Haram and the security forces – both of which have been accused of war crimes”(p3)…”Even if the military is successful in crushing the current manifestation of Boko Haram, a new version will most likely present itself, sooner or later, feeding on unresolved grievances and inequality” (p159).  These two quotes from the beginning and end of this timely and well-researched book sum up the twin problems facing the population of northeastern Nigeria: the Boko Haram insurgency and the brutal, clumsy and totally inadequate response of the Nigerian government and armed forces.  The work is particularly timely because of the election victory of the northern former military ruler of Nigeria, Muhammadu Buhari, which has opened up a new phase in the government’s struggle against the group.

The book is also timely because it is a thoroughly researched and sourced antidote to the very shallow media and Nigerian government explanations for the insurgency.  In immense detail, with a very full bibliography of sources and much original interview material, Virginia Comolli has assembled much fascinating and illuminating information on the historical, cultural, political and socio-economic roots of the movement and its relationship with mainstream and sectarian Islam in Nigeria.  The section on the early 19th century jihadist movement of Usman Dan Fodio provides a much-needed historical context for Islamic militancy in the north, a context which includes the forging of symbiotic relationships between the Muslim rulers of Sokoto, Kano and the British, and the entrenchment of the power of the Muslim aristocracy of the north, combining both political and religious hegemony.

The book goes on to look at the development of radical Islamist groups in northern Nigeria, particularly the north-east, which were critical of, or even violently opposed to, the traditional centres of Islamic power and influence.  If there is a criticism of this section it is that the plethora of groups becomes confusing and the precise religious but also socio-political differences between the groups become blurred. The reader also is apt to get lost in the various names, splits, factions and leaders involved – a family tree or chart would have aided understanding. At times, also, this section and some of the later chapters become like a review of the literature rather than a narrative or a definitive view from the author.

In dealing with the different Islamist groups and their stance towards political and Islamic authorities, I would have liked more on the poverty, lack of education and the socio-economic backwardness and marginalization of the north-east, in  particular the attempts to explain why groups like Boko Haram, its more internationalist-focused offshoot ‘Ansaru’, and its violent predecessor, known as Maitatsine, all thrived in  Borno, Adamawa and Yobe States.  The role of the city of Maiduguri as a centre for sectarian and violent Islamist groups could be more explicitly and clearly explained, along with more on possible links in terms of beliefs and willingness to take arms in a brutal way against fellow Muslims, as well as Christians, that seems to link Maitatsine with Boko Haram.

Comolli does provide a tour d’horizon of the Islamist groups, relating their appeal to poverty, poor education and other factors, but I would have liked more on this and the extent to which despair rather than doctrine is a key element in recruitment.  When I read the sections on the different Islamist groups, their factions, splits and ability to generate support among the northeast’s young, disadvantaged, frustrated and angry, I was reminded of the section in Umberto Eco’s novel, Name of the Rose, where the main character Brother William is trying to explain the differences between violent Christian heretical sects of the 14th century. He says that “many of these heresies, independently of the doctrines they assert, encounter success among the simple because they suggest to such people the possibility of a different life…I say that often hordes of simple people have confused Catharist preaching with that of the Patarines…Joining a heretical group, for many of them, is often only another way of shouting their own despair…the simple are meat for slaughter, to be used when they are useful in causing trouble for the opposing power, and to be sacrificed when they are no longer of use”.  This analysis fits Nigeria well, with the poor, ill-educated and desperate seeking a better or just a different life.

Comolli  goes on to examine and sensibly reject the alarmist US analyses of Boko Haram being a key part of international jihad and so a clear danger to the “Homeland”. She cautions against seeing it as being driven by an ‘international’ jihadist agenda, despite the movement’s desire to be seen as part of a wider movement towards a great Caliphate. She rightly characterises Boko Haram as “an inward-looking group feeding on local grievances and with a national agenda driven by the goal of Islamising Nigeria” (p85).

The author doesn’t pull any punches in describing the failed and brutal counter-insurgency offensive of the Nigerian armed forces which has driven people in the north-east further from the government and created sympathy with and prevented cooperation against Boko Haram. She points out that looting, harassment and rape by the Nigerian Joint Task Force (JTF) has driven many to oppose the government whilst still fearing Boko Haram.  Interviewees told her that they condemned the violence of Boko Haram, but “they understood why the group was critical of the government” (133).

In dealing with the failure of the military, there is a missing part of the jigsaw which still needs to be put together: Corruption. Corruption is mentioned in passing but not given enough prominence as a reason for support for Boko Haram among those who see all levels of governments appropriating rents from national revenues intended for local development purposes. Massive corruption in the military has also seen the best-funded and biggest army in sub-Saharan Africa go into battle with Boko Haram  with insufficient ammunition for soldiers’ weapons. In contrast, Boko Haram is well-armed and has possession of Nigerian armoured vehicles and other weapons that have been abandoned or perhaps even sold by its soldiers.  The corruption around the “security vote”, as military appropriations are known in Nigeria, is not mentioned and yet to me is a key reason for the failure  to deal with Boko Haram and the unenthusiastic attitude of poorly-armed soldiers to fight.  This was brought into sharp focus by the successes of the Chadian forces that joined the Nigerians in fighting Boko Haram in late 2014 and early 2015.

Despite my criticisms, this is well-researched and well written work of reference on Boko Haram. It explodes many of the myths about the group, providing historical, religious, cultural and socio-economic context.