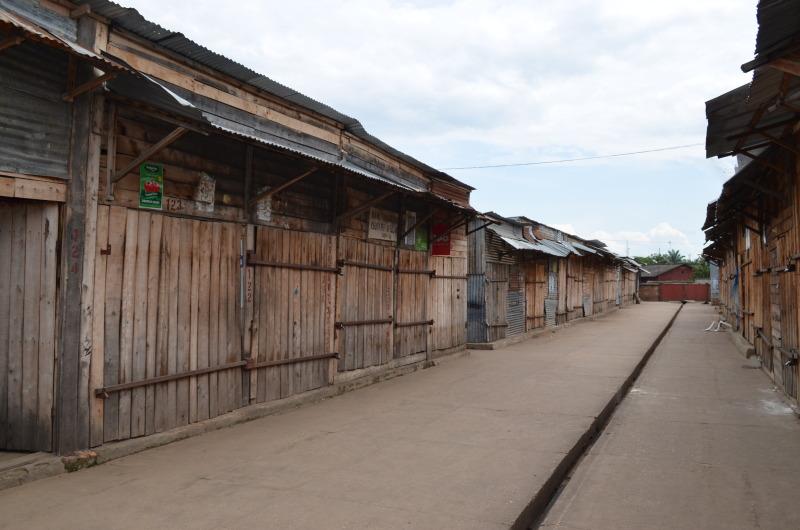 Many shops in the markets are closed because of the crisis

Economic activities have been effectively paralysed in Bujumbura as well as in other parts of the country since demonstrations against president Pierre Nkurunziza started. Violent protests are a near daily occurrence in the capital, ever since President Nkurunziza announced on 25 April his intention to seek a third term in office “” a decision that critics claim violates the constitution and the Arusha agreement.

Nearly 80% of the shops are permanently closed and the economy is slowly coming to a standstill. Since the demonstration movement started, repeated grenade attacks disturb activities in Bujumbura city.

In fact, the city closes at 6 pm. Everybody stops their activity and returns home. “I must be at home before 6 pm”, regrets a cloths seller in Bujumbura city. “I don’t want to be victim of those grenade attacks. No one knows when they explode.”

Business is not going well for bars and restaurants. Bars that were very busy before now see only a few people. At 7 pm downtown Bujumbura is completely dead. At 8 pm streets in even outlying neighbourhoods are nearly empty.

Consequently a considerable number of employees have been made redundant because many companies are not working normally. “I don’t work any more”, complains a woman who worked for a construction company. “My boss fired more than 50% of the staff because of this political crisis”.

The situation is the same for hotels and restaurants. A hotel manager affirms that 60% of the staff has been temporarily laid-off. “The majority of our customers are tourists. Because of the security situation, they do not come any more”, he regrets.

The consequences of the political crisis to the country, and Bujumbura in particular, are dramatic and disastrous for traders and the economy. In Bujumbura, the majority of economic activities have been paralyzed.

Bujumbura, the financial, administrative, political and economic capital of this small east African country, provides more than 70 % of monetary circulation and economic activities in the country and is therefore the principal tax revenue provider. According to Faustin Ndikumana, the Legal representative of the Burundian human rights organisation PARCEM, this crisis will affect GDP growth and tax revenue.

According to data from the Burundi Revenue Authority, an estimated 10 billion Burundian Francs (BIF) was lost due to the unrest in April and a further 16 Billion in May 2015. The press release published by the revenue authority shows that collected revenue in May 2015 amounts to BIF 33.9 billion. Expectations of this month were BIF 49.9 billion; that is a difference of 32.07 %. Compared to the result registered on May 2014, a gap of BIF 6.8 billion or 16.8 % has been registered.

Even before the current crisis, Burundi was not doing so well economically. The tiny nation in the Great Lakes Region was ravaged by a 13-year civil war that ended in 2006. It is one of the poorest countries in the world with a gross national income per capita of $260, and 58% of its population suffers from chronic malnutrition.

Exports are nearly non-existent, farmers produce too little to feed themselves and the country is riddled with corruption. Data from the World Bank published on 7 July 2015 shows that 80% of Burundians live on $2 or less a day.

The current economic crisis will likely escalate further if nothing is done to resolve the current political situation. The insecurity in the capital hampers economic activities.

In many Bujumbura markets a great number of stands remain closed. Some of their owners have fled to neighbouring countries such as Rwanda, Congo and Tanzania, while others fear to leave their homes because of the volatile security situation.

“For some of our colleagues, it is difficult to get to downtown. They wait for the situation to calm down,” says a trader in the central Bujumbura market. Even those who continue their business complain that some days they don’t sell a single item.

Those who fled the country – some 150,000 to date – have withdrawn massive amounts of cash, causing considerable harm to the banking sector. Furthermore, in this precarious political and economic situation people fear to invest and prefer to hold on to their money as they are not sure what tomorrow will bring. A commercial bank employee who prefers not to be named affirms that economic activities have been reduced considerably.

The lack of foreign currency is another serious handicap for the Burundian economy. At the moment, only prominent business people that have an export/import license can benefit from the use of foreign currencies in commercial banks while the rest of the commercial operators look for the money on the black market.

The Burundian Franc has lost value, making foreign currency more expensive. Before this political crisis one US dollar was worth BIF 1600, but now it is sold at about BIF1900.

Léonard Ndayizeye, a Lecturer in Economic and Administrative Sciences at the University of Burundi, explains this phenomenon by pointing out that there is not enough production of export products and services. Burundi imports ten times its export value. Ndayizeye is pessimistic; he does not believe that this situation will change any time soon.

Some political analysts say that the end of the violence will not automatically lead to an end of the economic crisis, especially if Nkurunziza is re-elected.

Half of the country’s budget comes from foreign aid and one of its main financial backers, Belgium, has already threatened to pull out if Nkurunziza remains in power.

The government of the Netherlands has clearly stated that it will stop any bilateral aid if the conflict is not resolved through dialogue and a change in leadership. The United States will not recognize Nkurunziza as president either.

Springtimes of the People in Sudan – ...