The much celebrated former Lagos governor, Babutunde Fashola, is facing a series of allegations. But is a political falling out behind the controversy? 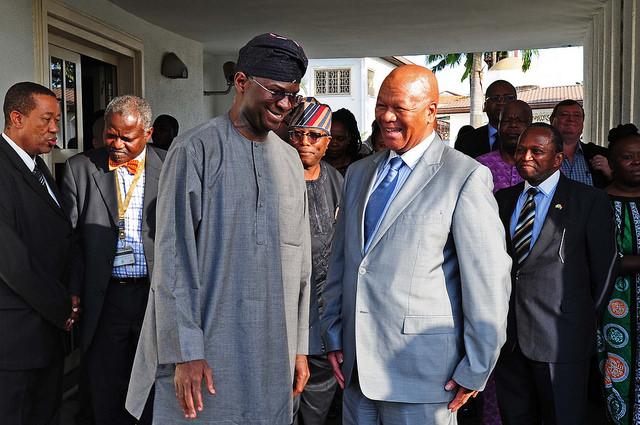 Once hailed by the UK’s Telegraph as “The man who tamed Nigeria’s most lawless city”, Babatunde  Fashola has now found himself in turbulent political waters.

Since stepping down as governor of Lagos in May, after a maximum two terms in office, the internationally-celebrated Fashola has been confronted with allegations of misuse of finances. The former governor has been accused of awarding hugely inflated contracts and of leaving an astronomical debt burden of over N400 billion ($2.1 billion) to his successor, Akinwunmi Ambode.

Fashola has denied allegations of corruption, describing the claims as “manipulated and unsubstantiated”.  Meanwhile, some of his supporters have suggested the accusations are part of a political campaign by the former governor’s opponents to prevent him being awarded a top job in the new government of President Muhammadu Buhari.

Once seen as a shining light amongst a new breed of younger Nigerian politicians and possible future president, could the 52-year-old Fashola now see his reputation undone?

A lawyer by trade, Fashola’s first break in politics came in 2002 when Bola Tinubu, who was then governor of Lagos, appointed him his Chief of Staff. A few years later, Tinubu rewarded Fashola for his loyalty and hard work by handpicking him to be his successor. The lawyer-cum-politician won the 2007 elections, under the banner of the Action Congress of Nigeria (ACN), comfortably.

Questions were asked about the process through which Fashola had been chosen for the role, but as political analyst Mark Amaza told African Arguments, the way in which the young governor was chosen by Tinubu was not unusual. “Godfatherism in Nigeria is very strong. There’s hardly any public office holder that’s without one,” he says.

As governor, Fashola carried out far reaching reforms in a city with an estimated population of 15-21 million and a GDP of some $50 billion – if Lagos were a country its GDP would make it Africa’s seventh biggest economy.

Lagosians witnessed improvements in vital sectors including education, infrastructure, public safety and security, whilst special attention was also paid to increasing tax revenue, which now accounts for 65% of the state’s income.

Fashola’s tenure was not without its critics and controversies. For example, mass clearances of slums under the “˜urban renewal programme’ left thousands of low-income Lagosians without homes as the city’s business and political elite benefitted from redevelopment contracts.  But the consensus domestically and internationally was highly sympathetic to the governor of the bustling metropolis.

“Fashola preached transparency in government and was a role model in public administration,” says Simon Kolawole, former editor of This Day newspaper.  Meanwhile, outside Nigeria, Fashola received plenty of praise, with the Economist magazine describing him in a 2011 editorial as “a rare good man” and the International Crisis Group naming him as one of seven outstanding personalities worldwide in 2015.

The eye of the storm

Many saw Fashola as a highly effective politician and when the 2015 elections came around, Buhari called on the Lagos governor to help his campaign. Fashola headed up the  campaign’s finance committee and worked hard to deliver his share of the votes in Lagos.

In return, many have been expecting Fashola to be awarded a big portfolio in the new government, with the positions of Chief of Staff to the President and Secretary General to the Federation (SGF) being mentioned.

However, this possibility may be looking a little shaky now. Within weeks of leaving the governor’s office in May, allegations of financial and personal impropriety began to surface.  Fashola was said to have spent N78.3 million ($390,000) on the upgrade of his official website, N139 million ($700,000) on the drilling of two boreholes at the government secretariat and to have awarded a N640 million ($3.2 million) contract to German engineering firm Julius Berger for the reconstruction of a car park and other associated works at the Lagos House Marina, his official residence.  The story of an illegitimate child also made its way into national dailies.

Civil society organisation The Coalition Against Corrupt Leaders (CACOL) have led calls for Fashola to be investigated, and the group has forwarded eight petitions to the Economic and Financial Crimes Commission (EFCC) and Independent Corrupt Practices and Related Offences Commission (ICPC) detailing the allegations.  CACOL’s executive director Debo Adeniran has said that the Lagos State government under Fashola saw “frivolous spending on white elephant projects, lack of due process in budget implementation as well as inflation of costs in contract awards”.

For his part, Fashola has penned an official rebuttal titled “When you wrestle with a pig, the pig gets happy and you get dirty” in which he called the claims “distorted allegations without evidence”.

While the veracity of the allegations remains to be seen, some observers trace Fashola’s current travails to his fractious relationship with his former godfather Tinubu.

There were signs of rift between these two Lagos big dogs as early as 2009, when Tinubu was thought to be unhappy with Fashola’s unwillingness to toe his line. There were even rumours that Fashola might be impeached.

This dispute seemed to simmer down, and Tinubu endorsed Fashola for a second term in 2011, saying “I am the pathfinder. He is the navigator. I am the one that identified the talent.” But bad blood resurfaced a few years later over the choice of Fashola’s successor as governor. Tinubu eventually emerged victorious, with his preferred candidate Ambode being chosen. Ambode went on to win the governorship, cementing Tinubu’s role as kingmaker.

Relations between the two former governors appear to still be raw, however, and earlier this week, former minister Femi Fani Kayode publicly asked Fashola to “make peace with his benefactor Bola Tinubu before it is too late.” Tinubu though denied a rift, saying yesterday: “Governor Fashola and I are and shall always be political allies and fellow travellers on a vital journey”.

Nevertheless, suspicion remains that the corruption allegations – whether true or not – are linked to a behind-the-scenes wrangle for power.

For his part, President Buhari is probably hoping that a reconciliation between these two influential allies of his will come soon. If the accusations turn out to be true, Fashola’s reputation will take a tumble. But if this is at heart political manoeuvring, Buhari will be keen for it to be resolved so he can bring Fashola into his team. The young(ish) former governor is a seen as a credit to the APC government, and as Amaza puts it, “Fashola is actually effective despite all his shortcomings and his popularity will bring the Buhari administration plenty of goodwill.”